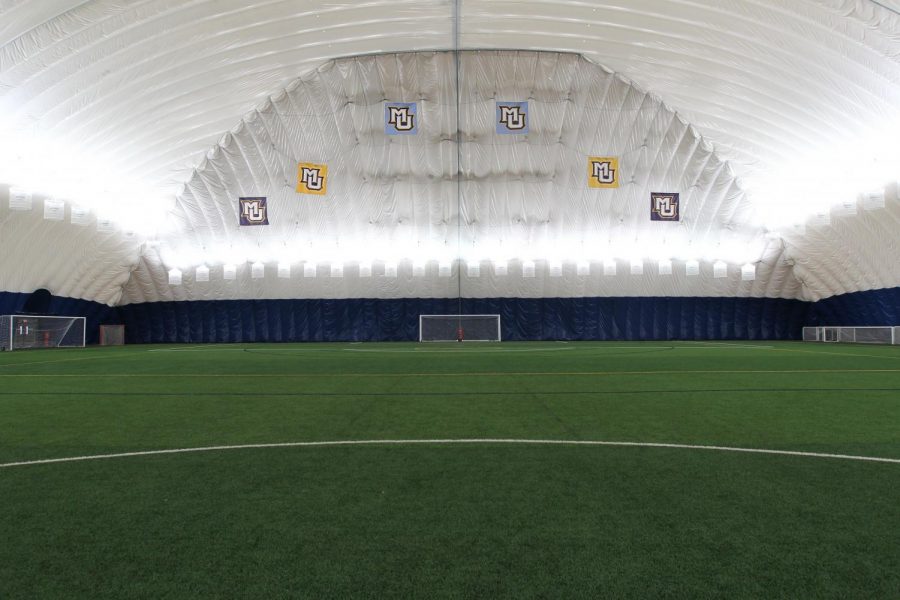 Marquette club teams have been practicing in the Valley Fields dome in lieu of their outdoor spaces because of poor weather. (Photo courtesy of Marquette Athletics.)

Club baseball president Chris Tredwell hoped to have his team play 15 games in five weekends, but this year, they’ve played eight through four weekends, because of Mother Nature.

“The weather has been awful for us,” Tredwell said. “We’ve been preparing every weekend for games, and it’s just been ruining our season, which is already pretty compacted anyways. The most frustrating part has been that the team puts in a few hours a week and meets a few times each week and have only been able to play two games since spring break.”

With a mixture of cold, rain and even snow, many club teams have been forced to cancel games and practices that were scheduled to be played outdoors. High temperatures were in the 30s as recently as last Wednesday and three inches of snow hit the Milwaukee area on top of it. These conditions made playing baseball or softball impossible.

Tredwell said seven of the team’s games have been canceled thus far. Practices have been safely held inside the climate-controlled Valley Fields dome, but not even those are entirely safe. One practice had to be cancelled so that other club teams could use the space to train away from their snow-covered fields.

The team has rescheduled three of the seven cancelled games, forcing the team to play four games between Friday and Sunday. That includes a four-hour trip to Eau Claire on Sunday.

“The weather has really hurt us,” freshman starting pitcher Shawn Donahue said. “It’s just been hard for us to catch a rhythm, and I think that has affected us as a team.”

Better weather is on the horizon, though. Sunny days and high temperatures at least in the upper 40s are in the cards for the next week, which has allowed the team to focus on making up a some of their games.

Tredwell also said the team is looking into playing weeknight games to make up for cancellations. They are also eyeing finals weekend as a makeup possibility.

The Marquette club softball team has experienced similar bad luck with the chilly spring weather. The program had two tournaments canceled for the spring season and had limited practice opportunities outside.

“We were able to get two of our tournaments in, but it was super cold,” sophomore Riley Wetenkamp said. “We wore tons of layers, and I even wore my winter coat with a mitten in my pocket to warm my hands between batters.”

The team has incorporated more team events, such as dinners, to make up for the cancellations and will hope for anything but snow going forward.