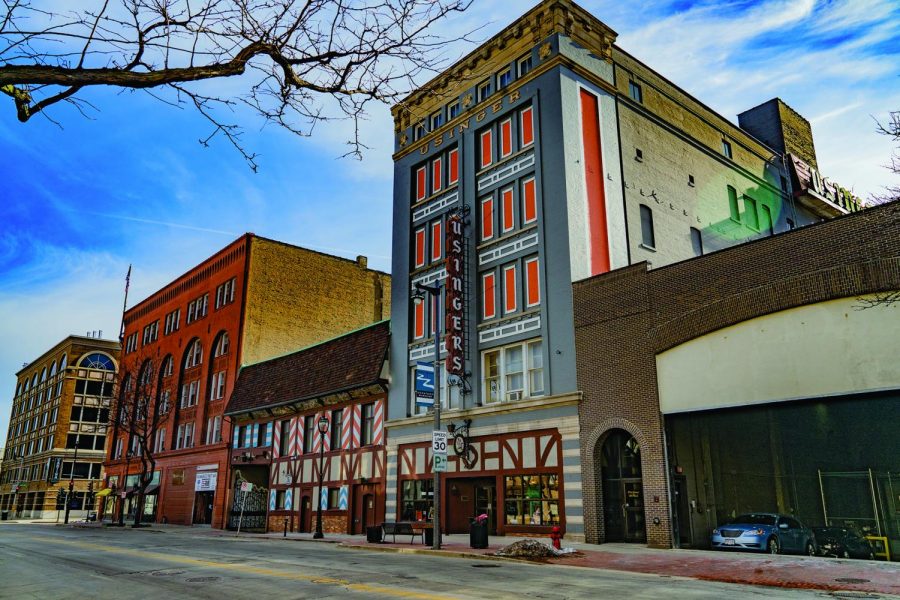 Old World Third Street has a rich history of German roots through beer, brats and other food and drinks served at the restaurants and bars in town.

The influence of German culture on Milwaukee is evident almost anywhere you go, with beer, pretzels and sausages on the menu at most bars across the city. But one street in particular seems to be at the center of Milwaukee’s German infusion.

Old World Third Street is a stretch of bars and restaurants downtown that is heavily influenced by its German past. The street used to be the heart of German culture in Milwaukee, with German shops and restaurants populating the area. It is said that shopkeepers used to hang “English spoken here” signs in their windows to try to entice non-Germans. Now, the street has been renovated as a lively bar street, but it retains old German heritage.

Mader’s has been a staple on the street since its beginning as a German hub. It has been serving traditional German food and beer on the corner of Highland Avenue and Old World Third Street since 1902.

Started by an immigrant from Southern Germany, Charles Mader opened his very first institution upon moving to Milwaukee in the late 1800s. Since then, the place has been run by family members, and the restaurant prides itself on making delicious German food, including potato pancakes and a pork shank with an apple glaze.

“Specifically, it is known as a German restaurant. Eighty to ninety percent of our dishes come from Germany, favoring Southern Germany and the Bavarian style,” Kristin Mader, a relative of founder Charles Mader, said.

On the other side of the street, another place has been making German food for a long time. Usinger’s has been serving traditional Bavarian sausages for over 130 years in the Milwaukee area.

Frederick Usinger came here from Germany and worked for someone in a sausage shop, and then bought the store from her and started making his own German recipes.

The traditional building, which has been on the street since 1880, serves over 70 different kinds of sausages with recipes that have remained unchanged since the company’s beginnings.

“Milwaukee definitely has a pretty wide German immigration base,” Mader said, adding that the presence of so many German restaurants and shops along Old World Third Street is a not to the high concentration of German immigrants in the area.

“You flip open a phone book or go into the white pages, the names that you see are (going to) be very different from the names you see in a different region,” Mader said.

Mader said that with any sort of immigration, there is a transfer of culture seen, as well.

German culture is not specific to Old World Third Street. Across town, Kegel’s Inn in West Allis has been serving traditional German and Austrian food since 1924, although it didn’t start out that way.

After immigrating to the United States in 1911, John T. Kegel struggled to find good and consistent work. Friends convinced him to open a soft drink parlor, which also served as a speakeasy during prohibition. John made his own beer and whiskey in the basement and served it to customers.

After a smooth start, in 1927, state agents arrested Anna Kegel for serving alcohol. Luckily for the restaurant, Wisconsin stopped their enforcement of prohibition in 1928, and the restaurant remained. Now, Kegel’s Inn focuses on serving the community traditional Bavarian flavor.

“Some of our specialties include boneless roasted duck, Hassenpfeffer, which is a spiced rabbit stew, and Sauerbraten, which is a marinated beef roast with sweet and sour gravy,” Stephanie Kegel, fourth generation operator of Kegel’s Inn, said.

No matter where you go in Milwaukee, the German influence is present. From Old World Third Street to West Allis, the Milwaukee area is a hub for beer and brats.