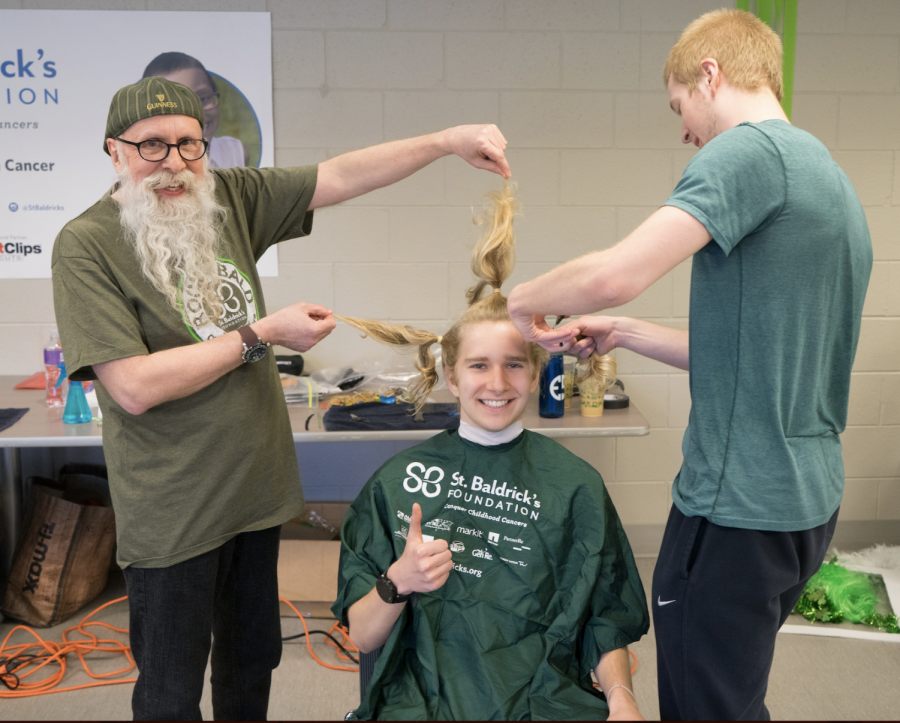 Freshman Joseph Miscimarra poses before he gets his head shaved for the St. Baldrick's Foundation April 21.

The Marquette Evans Scholars raised over $16,000 and shaved dozens of heads April 21 in support of St. Baldrick’s Foundation, a charity that sponsors childhood cancer research.

Evans Scholar Madeline Kelly, a junior in the College of Business Administration and lead organizer of the event, said the St. Baldrick’s fundraiser at the university began because a Marquette Evans Scholar was diagnosed with cancer as a child. He had AML Leukemia. He recently celebrated being cancer free for 20 years. Childhood cancer encompasses teenage and adolescent cancer. St. Baldrick’s treats teens as well.

“It’s one thing to get the money raised … but to have people stand in solidarity with people who lose their hair because of cancer is really awesome,” Kelly said.

For some participants, the annual St. Baldrick’s event is a fun occasion that brings people together. Joshua Steinfels-Saenz, a junior in the College of Business Administration and an Evans Scholar, has shaved his head three times in support of the cause. He’s been gearing up for this year by spending the last year growing out his hair.

“It’s the spirit of the event where all of us are coming together as a community to do something great,” Steinfels-Saenz said.

For other participants, the annual event is symbolic of a greater cause.

Brendan O’Grady, a sophomore in the College of Business Administration and an Evans Scholar, shaved his head, along with his uncle and two younger cousins, who drove up from Illinois for the fundraiser. O’Grady’s family surrounded him and took pictures.

This wasn’t the first time O’Grady or his uncle, Chris Browne, had their heads shaved for St. Baldrick’s.

“We had a sister and an aunt pass away from cancer. It’s something close to us,” Browne said.

Collectively, O’Grady said his family raised nearly $2,000 for St. Baldrick’s. The participants get people to sponsor them and donate money several months leading up to the event. Then, the participants shave their heads on the day of the event.

“It’s a great cause. I think everyone should do it,” O’Grady said.