Women’s lacrosse falls at No. 23 Georgetown in overtime 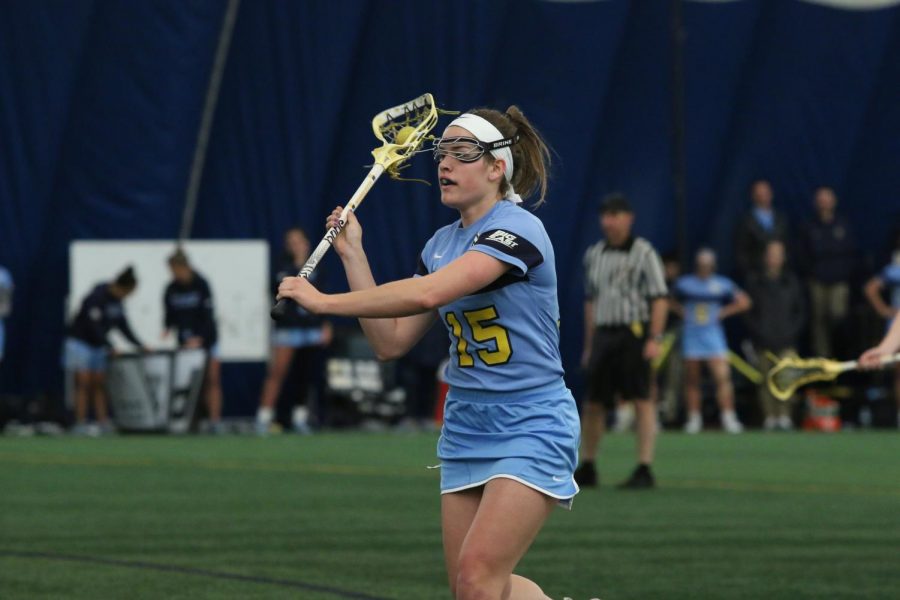 The women’s lacrosse team will have to wait until Saturday to clinch a spot in the BIG EAST tournament after falling to No. 23 Georgetown (11-4, 7-1 BIG EAST), 9-8, in overtime. Hoya attacker Taylor Gebhardt scored a game-winning goal with 4:38 left in overtime.

With the loss, the Golden Eagles (9-7, 5-3 BIG EAST) drop to fourth place in the conference behind Denver (10-4, 5-2 BIG EAST). The Pioneers also have tiebreaker over Marquette by virtue of their 17-11 victory against the Golden Eagles last week.

Sophomore goaltender Julianna Horning kept Marquette in the game, holding Georgetown to one goal in the second half and making a career-high 19 saves.

Georgetown got on the board first with an unassisted goal from Natalia Lynch, sparking a 2-0 run. Senior midfielder Allison Lane answered back two minutes later to put Marquette on the board.

The next nine minutes of play were controlled by two 2-0 Georgetown runs, giving the Hoyas a 6-2 lead. Junior midfielder Logan Dobratz ended the run with an unassisted goal, igniting a 3-0 spree for Golden Eagles. Senior attacker Charlotte McGuire and Lane also scored to put Marquette down only 7-5 at the half.

Senior attacker Riley Hill and Lane each scored early in the second half. The Hoyas answered eleven minutes later with their only goal of the half from sophomore Michaela Bruno. Sophomore midfielder Megan Menzuber answered for the Golden Eagles with a feed from attacker Cate Soccodato to level the score at eight with just over seven minutes to go, where it would stay until Gebhardt won it overtime.

The Golden Eagles will return to Valley Fields Saturday to take on the UConn Huskies at 12 p.m. for senior day.