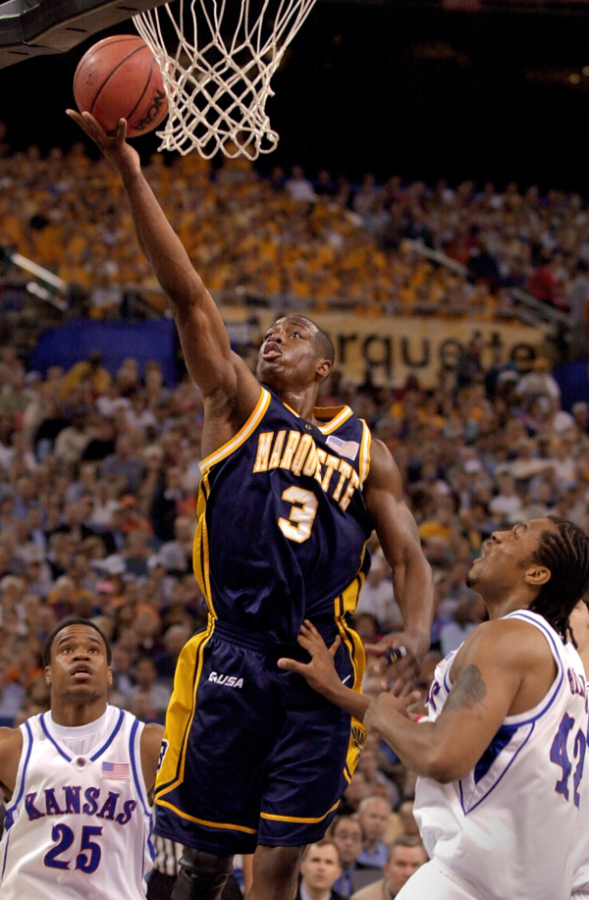 Almost exactly 15 years ago, Dwyane Wade did something no player in more than two decades did: lead Marquette men’s basketball to a Final Four.

“You should address him as Mr. Wade after everything that he did here,” former head coach Tom Crean joked prior to last year’s 100-year anniversary celebration.

But even before Wade became Marquette’s most recent consensus first-team All-American, people knew he was going to be a special player.

How to get back at Dwyane Wade
There wasn’t much that Harold L. Richards High School coach Jack Fitzgerald could do to get under Dwyane Wade’s skin.

All that changed when Fitzgerald took away Wade’s favorite weapon – driving to the hoop. He would set up a drill with Wade on a team with four of the scout team players. Then, Fitzgerald told Wade that he wasn’t allowed to slash to the hoop.

“He had to shoot a jump shot, and that’s the only way he could score,” Fitzgerald explained. “I thought he needed to work on his shot, and he was such a great slasher that nobody could cover him, not even the guys on the first team.”

The frustration would soon hit as Wade couldn’t rely on his primary scoring method to revive his squad.

“He used to get a little frustrated with that, especially when he started losing,” Fitzgerald said. “He wanted to get back up by slashing the basket, and I said, ‘You can’t do that. It doesn’t count.’”

Fitzgerald had one other way of getting back at Wade: sitting him on the bench.

“The best way to get back at Dwyane if he wasn’t playing as hard as he should, I’d kick him out of a practice or a scrimmage,” Fitzgerald said. “He hated that because he always wanted to play, so that was my big punishment for Dwyane.”

“While everyone else was looking to get out, he never wanted to get out,” Fitzgerald added.

Better basketball player than golfer
Wade’s athleticism has led to a 15-year NBA career, but that has not translated to an 18-hole course.

“I’m going to try to work with him,” Fitzgerald said.

Fitzgerald occasionally golfs with Wade during the offseason, but there isn’t much doubt about who is the better golfer.

“Well I’ve been playing longer than him,” Fitzgerald said. “He’s got a long way to go to be a better golfer.”

Now a retired teacher and scout with the Miami Heat, Fitzgerald is appreciative of Wade’s mediocre golfing as an opportunity to bond with his former superstar.

“I’m so glad that he’s playing because it’s a chance for me to spend a couple hours with him,” Fitzgerald said.

Eleventh man at a young age
The first time Fitzgerald met the player that would change his coaching career, it was hardly a happy interaction. Fitzgerald was picking up Dwyane’s older brother Demetrius McDaniel for practice. Dwyane, several years younger, was an unwelcome surprise.

“When I picked up Demetrius, out pops this little kid with him, and I say, ‘Who’s this guy?’” Fitzgerald said. “He says, ‘Oh, this is my stepbrother. I have to bring him because I’m babysitting him.”

“I said, ‘What the hell, do you think I’m running a childcare here for God’s sake?’” Fitzgerald said. “I got kind of pissed off that there’s an extra guy in the car.”

Then Fitzgerald was a man short of running an 11-man break drill after two players didn’t show up.

“How could we do it? We only have 10 people,” Fitzgerald said when Demetrius asked about the drill. “He said, ‘My little brother could play.’”

“So we start the drill, and Dwyane was pretty good,” Fitzgerald said. “I went over to Demetrius and said, ‘Hey, do you have any more brothers at home?’ … That’s when I knew I was getting a good player in a couple of years.”

Fierce… for the most part
Dwyane Wade had a reputation for being an intense competitor.

“He was fierce,” teammate Cordell Henry said. “He was a competitor.”

“We were doing some shooting afterwards,” Merritt said. “(Crean) pulls D-Wade aside and pulls Terry Sanders, another freshman, aside, to play one-on-one …  And (they’re) already dead tired. (They) have nothing left in the tank.”

“There was a loose ball. They both go dive on the ball, but they’re so tired that they can’t get up, so they just lay on the floor for like 10 seconds.”

All this happened while the rest of the team was pretending to practice, desperately avoiding extra work.

“Everyone else was trying to avoid the drill, so we’re pretending like we’re doing something.”

That was one of many memorable practices from the Crean era. Often before big games against teams like then-conference foe Cincinnati, Crean would do a drill where all four players had to keep Wade out of the paint.