Louder Than Words: How Art Serves As A Form Of Activism 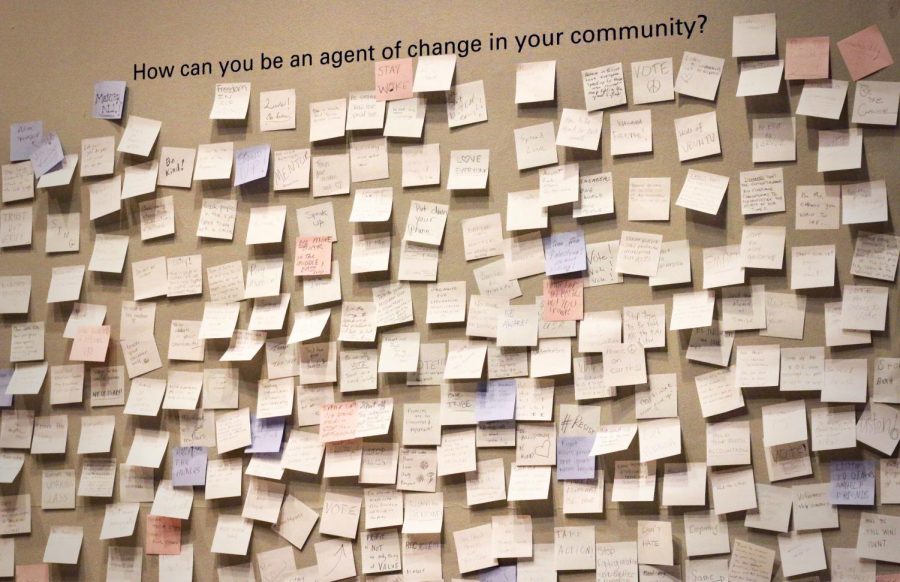 Art Exhibits at the Haggerty Museum of Art are inspired by political activism.

The first time she saw Nicolas Guagnini’s sculpture, “30,000,” Mary Ann Bonet, the manager of community engagement at the Haggerty Museum of Art, says she was astounded.

While studying abroad in Buenos Aires, Argentina, during her junior year of college, Bonet visited the massive piece that had been placed along one of the main rivers in Argentina in memory of the bodies of political dissenters that was deposited there during the nation’s “Dirty War.” It was a moment that struck her immensely. One, she says, that came to shape her life.

“When I think about my career in museum and art education, I think a lot about this piece,” Bonet says. “It’s a piece that has stayed with me and encapsulates my time (in Buenos Aires) … I started to think about how art is a way to engage with people.”

The ability of art to inspire activism and understanding is seen in the stories of many different artists and social advocates. Art inspired Bonet to pursue her current career, where she today organizes events at the Haggerty to engage and educate the community about art’s potential. Besides Bonet’s story, many others on Marquette’s campus work to bring the link between art and activism to light and use it for good.

Katie Ruffino, a sophomore in the College of Health Sciences and member of Gold ‘n Blues a capella group, acknowledged the powerful nature of art when explaining why Marquette’s Biomedical Sciences Student Association had chosen to feature different music groups at their fundraiser for Puerto Rican hurricane victims.

“Music says so much in just a small amount of words and of time … Lyrics, and art in general, are so dense,” Ruffino says. “And music is something that draws a lot of people, so with incorporating music into a fundraiser, it tends to reach a bigger audience.”

This harnessing of contemporary, art-based technologies like social media and music production is something Emilia Layden, the curator of collections and exhibits at the Haggerty Museum of Art, says activists have been doing for years.

Referencing the current exhibition at the Haggerty, “Resistance, Protest, Resilience,” that features photographs from various social movements, Layden says she saw direct ties between students in the Student Nonviolent Coordinating Committee during the Civil Rights movement and those using art to fight for justice today.

“In the same way that (SNCC) was very savvy with the way they were using media, as photography was the hot technology of the day, you can draw a parallel with how youth activists today, particularly those related to March For Our Lives, are using the technologies and tools available to them,” Layden says.

Layden says she is a firm believer in the power of art to illuminate perspectives that from there spark change, specifically highlighted through the medium of photographs used at the Haggerty exhibit.

“The exhibit is about the power of images to construct narrative,” Layden says. “Images tell stories, and people make meaning from those stories, but that meaning isn’t fixed. So this exhibition is designed to slow people down and draw those meanings out.”

Dr. James Marten, professor and chair of the history department, says he sees images loaded with meaning and the potential of art as activism especially in the crafting of political cartoons.

“You can put a whole three pages into one picture, into a couple of lines of dialogue, if you’re a pretty good artist (and) a pretty good commentator about what’s going on,” Marten says. “And that’s a really, really direct link (between art and activism).”

Beyond just still art forms, Layden explained that there’s an intrinsic power in any piece crafted and shared. Being asked to speak about the link between art and activism brought to mind a phrase that she hears often at the Haggerty.

“Something that our director says all the time is that the power of art, in many ways, is that it makes you think and feel at the same time,” Layden says. “Artists aren’t providing answers — they’re provoking questions. And it takes a tremendous amount of courage to decide that you need to make something and put it into the world.”

Graham Bowerman, a freshman in College of Business Administration and musician involved in student organization MUsic, agreed that there’s courage and vulnerability that comes with creating controversial art. Recalling his composition of a song inspired by a Milwaukee shooting, he says that making political statements through art is almost always sticky.

“People are usually very sensitive,” Bowerman says. “So if you’re going to be political … you have to make sure you’re very careful about how you say it.”

But just because there are certain precautions involved with bringing activism into music doesn’t mean Bowerman has refrained from harnessing the art’s power. Instead, he says he aspires to do just the opposite.

And art — Bowerman, all those mentioned and many others firmly believe — does indeed have the power to do all of that.