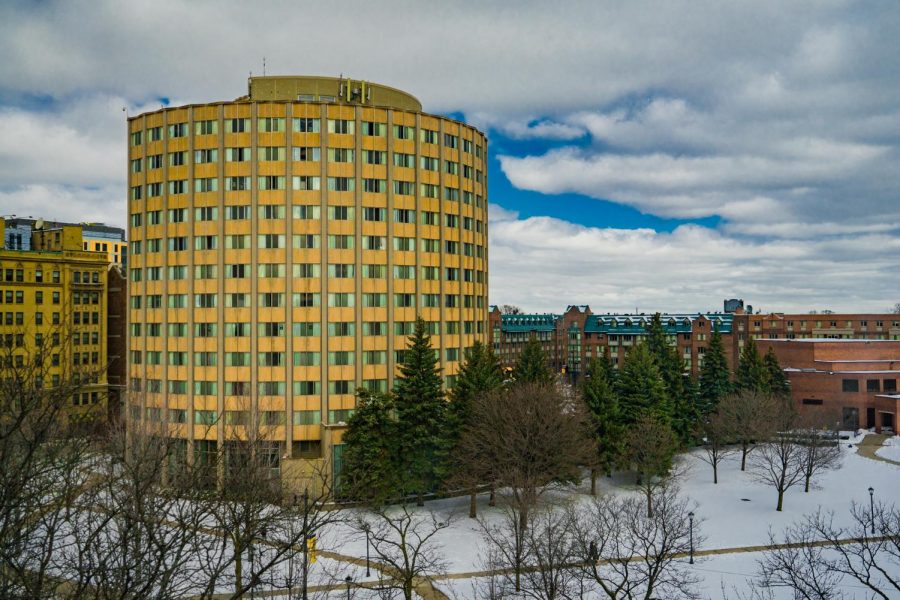 Known warmly by many as “the Beer Can,” McCormick Hall made itself a distinct silhouette in the Milwaukee skyline and earned itself quite the reputation. After 50 years of housing restless Marquette students, McCormick’s last residents will move out this May. In honor of the Marquette legend, people fondly reflect on their time in Corms.

“I was in the first class to live there. My roommate and I first lived in Nicholas (Residence Hall) and climbed McCormick while it was still in construction to pick the room we wanted. My memory fails me, but I know we picked the top floor. We were facing east and had a great view of the city, Wisconsin Ave, and the lake.” – Ronald Taddeo ‘71
“My mom and dad both went to Marquette to play basketball. My dad lived in McCormick Hall as a freshman in 1981. He lived on the ‘basketball players’ floor that sat 10 stories high. 35 years later, he moved me into my dorm room — and of course, by random, it was on the 10th floor in McCormick. The memories all flooded back — including tons of stories and constant reminders that ‘the drinking age was 18 back then.’”- Jenny Fischer ‘19

“While attending MU, the father of a friend took a group of us out to dinner and shared his best memories of college (most involved The Avalanche). One story in particular has stuck with me as being one of the most amazing and yet brazen acts of college stupidity or genius, depending on how you look at it. When this father was attending MU he found himself longing for a warm dip in a pool in the frigid Wisconsin winter. He gathered a few friends who also became convinced that a nice warm swim was just what the good doctor ordered on that particular cold evening. They disassembled the old bumpers from the dorm beds (evidently the old beds had a shelf hidden by an upholstered door that was level with the bed and helped the bed also serve as a couch, or so I have been told) and proceeded to block the doorway to the men’s shower room along with the drains. Once the doorway and drains had been sufficiently blocked, they turned on the water and filled the space. Unfortunately, none of those participating in the shower room swim were engineers so they hadn’t planned on the water pressure pushing the bumpers blocking the doorway, which is what eventually occurred, flooding the dorm rooms on that floor and those unfortunate enough to live below the water spill. As I remember it, none of the culprits of the McCormick Flood were ever apprehended, but since the buildings are going away and decades have passed, it’s time for this epic story to have one last breath of life.” -Keri Hanson ‘04

“I was told by the perps they closed the drains with towels and had about two feet of water in the bathrooms which were the middle of the dorm and were enjoying themselves when the authorities intervened, and the great pool party of 1972 was drained.” -Henry Herschel ‘75

“It was my freshman year. I was in room 928. I was asleep. Around 2:00-3:00 am, I woke up from kids screaming out in the hall. I was half awake and could hear what sounded like the sloshing of people walking through water. I was on the bottom bunk — went to get out of bed, when I put my feet on the floor I realized there was about six inches of water on the floor. The rooms closer to the restroom had nine to 12 inches of water. Two kids on our floor had removed their beds from their room and double bunked them in another room to make room for about 50 bags of sand to turn their room into a beach.” -Bill MacPherson ‘89

“My roommate Louisa and I wanted to make a Christmas card because we were sad we weren’t getting them at school, so we made it and taped it to all of our friends’ doors and handed them out to people. I have a few friends who still have them on their doors. It was nice cause it made it feel more home-y.” -Chrissy Fox ‘21

“A couple of us living on the eighth floor in the fall of 1978 were recruited by another guy on the programming board to work as roadies for a concert at the Varsity Theater featuring The Outlaws and Molly Hatchet. The guys from Molly Hatchet, not really established yet, arrived in an old, beat-up tour bus and were looking for a place to clean up after the stage was set up and they went through a sound check. So we took the guys up to the eighth floor, and they used one of the two common shower rooms on the floor. All clean, they put on an energetic show as the opening act. It’s not quite like the Beatles staying in what became Mashuda, but it’s something a little different.” -Rick Kozlowski ’82

“Living there as a resident was crowding probably over 10 people into a double room because we were all panicking about our extended lab report for General Chemistry that we had to get done and all helping each other out and bonding with random people that I now consider some of my best friends.” -Olivia Smith ‘19

“I love living in McCormick because being in such a little space has made my roommate and I so much closer. We call our room ‘a little slice of heaven.’ Every night we say goodnight to each other before bed. It’s a nice way to end the day and have some ritual no matter how crazy life gets.” -Clare Lumetta ‘21