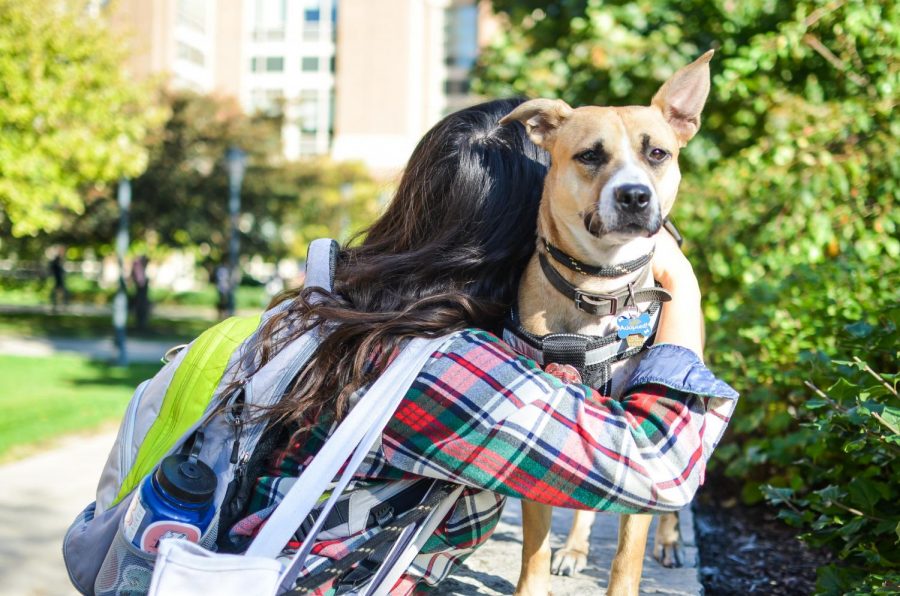 A student hugs Nattie outside the Joan of Arc Chapel.

Social engineering: What may initially seem like a foreign phrase is actually one of the most important topics in today’s society (and not just for aspiring marketers like myself) that impact everyone. Here are some topics to consider: Russian troll farms, election meddling, Tide, Kleenex and Nattie, the Marquette University Police Department dog.

While only one of these has a negative association, each instance relies on a phenomenon that is fascinating and varying in complexity. It is the future of advertising, and has long been a relatively nuanced vehicle of progress.

One way to think of social engineering is as the practice of using various methods to influence public opinion and solve social problems or improve social conditions. Yet, I would also add it often involves a desired mimicry of behavior and is usually done with subtle execution rather than direct commands of certain actions.

Such was the case a few years ago when the Ice Bucket Challenge asked people to pour ice water on themselves in support of the ALS Association, which raises money for research and support services involving ALS or Lou Gehrig’s disease.

The social engineering component came into play when people saw their friends dousing themselves for a good cause and then followed suit. Then so did their friends, and so it continued. Progress was made, and $115 million was raised.

Another great example is the ever-popular and furriest officer in the Marquette University Police Department: Nattie. When students see her and an officer walking around campus, they feel more inclined to approach them and strike up a conversation, Nattie being the method and the behavior being more conversation and student-officer interaction. Social engineering can be a good thing.

Social engineering can also be damaging to public trust and sentiments while working against progress. Without being overly political and sticking with just the facts, it has been widely reported that there was Russian meddling in the U.S. election (President Donald Trump, Robert Mueller and special counsels aside) in the form of a troll farm.

BBC’s Dave Lee said the Russian Internet Research Agency posed as Americans after extensively researching the type of statements that would elicit a response from Facebook and Twitter users. Statements like, “Trump is our only hope for the future” spread like wildfire. Again, posts on social media playing into anxieties about the opposing candidate, the method and the vote being the result.

There is also a bevy of corporate entities that professionally mine user information for the use of other organizations or companies to influence consumer and individual thought, decisions in the marketplace and pop culture and political and societal trends.

Cambridge Analytica is the current poster child of this trend, but there are other companies like IBM and it’s artificial intelligence platform, Watson, which has a social media feature.

Consultancies such as Boston Consulting Group and McKinsey & Company also devote massive resources to analytics and big data mining when making recommendations to clients who want to influence consumer decisions as well. These secondary examples may be more neutral, but the point still stands.

Social engineering can also be used by brands directly, such as how Kleenex became synonymous with tissues. The method was to gain market share (47.1 percent in the facial tissue market) and use a related brand name to the issue at hand.

Tide did this with its Super Bowl LII commercial by suggesting that any time clean clothes are shown, it is probably because of Tide. Again, Tide was the source, and thinking about clean clothes was the result (which also helped people forget about the insane and delirious Tide Pod challenge for at least a little while).

In conclusion, social engineering is really important, underappreciated and impacts society in many different ways, good and bad.