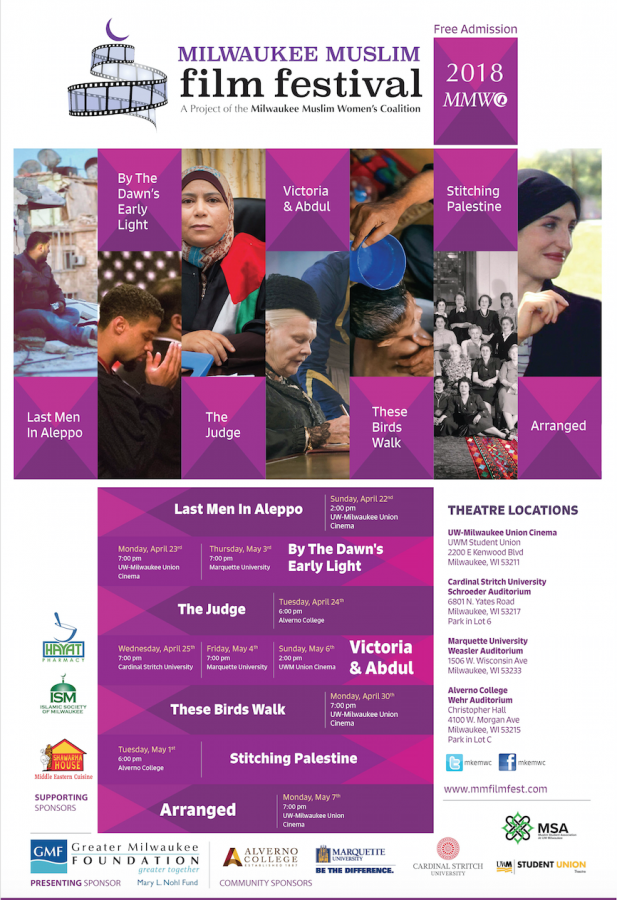 This is the first time the university will host a Muslim film festival. The festival began in 2014, and it is also being hosted by the University of Wisconsin-Milwaukee, Cardinal Stritch University and Alverno College. Admission is free, and there will be a talk-back after each film.

“One of the things that we have done for literally the past two decades is find opportunities to build bridges of understanding and promote better understanding of the Muslim community,” Najeeb said.

Najeeb also said she hopes the festival will create more understanding of the Muslim world.

“It’s an opportunity,” Najeeb said. “We’re really hopeful that, although it’s a Catholic university, there’s enough interest and curiosity to learn something new, to experience a film that someone might not necessarily go to, to expand one’s horizons.”

The Muslim prayer room located in the Alumni Memorial Union sustained two attacks of vandalism last year. Despite this, Najeeb said she believes the festival will cause students to reevaluate their stance on Islam and discourage the attacks from happening again.

“(The festival) will help individuals that maybe have very narrow understanding of the Muslim community and Muslims in general,” Najeeb said. “Hopefully this will encourage them to attend and ask the questions that are concerning them.”

Louise Cainkar is an associate professor of Arab-American studies and on the committee planning the festival. She said the relationship between Marquette and the MMWC began with the Community Engaged Research Partnership Development Grant, awarded to Cainkar by the Office of Community Engagement and the Office of the Provost.

The grant seeks to create a community-based partnership “in response to a mutually-identified community need.” Cainkar chose to connect with MMWC for the grant.

Cainkar said Najeeb proposed bringing the film festival to Marquette as part of the grant project. Dan Bergen, executive director of the Office of Community Engagement, approved the project and oversees the facilitation and planning.

Cainkar said the project will give the Marquette community a chance to look at its relationship with Muslim communities across Milwaukee.

“What’s important about this is individual professors and staff and offices at Marquette have had relationships with the Muslim community, but this is really our first institution-wide relationship,” Cainkar said.

Cainkar also said she thinks a majority of people on campus have misconceptions about the Muslim world. She said she hopes the film festival will clear up negative stereotypes about Muslims.

“I lead this Islam immersion trip to Detroit every spring break, and I can see from the students’ reactions … that there’s a whole world of Islam and Muslims out there that they have very little idea about, mainly because they’re presented to us in very simplistic and stereotypical ways,” Cainkar said.

Two showings during the two-week festival period will be held in the Weasler Auditorium.

“By the Dawn’s Early Light,” a 2004 documentary on NBA player Chris Jackson’s conversion to Islam, will be screened May 3 at 7 p.m. “Victoria and Abdul,” a 2017 historical fiction film based on the relationship between Queen Victoria of the United Kingdom and an Indian Muslim servant, Abdul Karim, will be screened May 4 at 6 p.m.

“Marquette recognizes and cherishes the dignity of each individual regardless of age, culture and faith,” Dorrington said in an email. “One of the best attributes about Marquette is in the way we have open conversations on some of the most significant topics occurring worldwide. We look forward to this festival contributing to this open dialogue.”