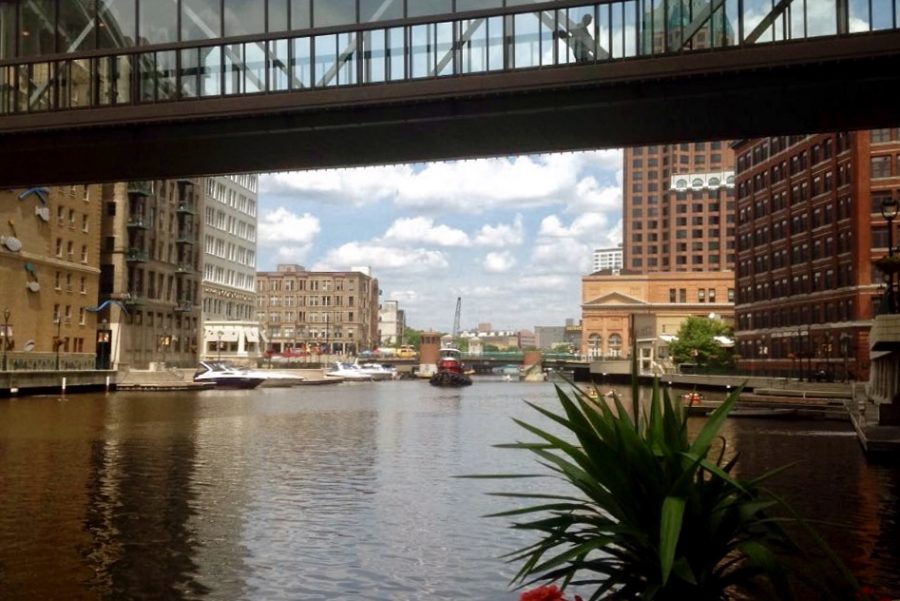 The Milwaukee, Menomonee and Kinnickinnic river watersheds earned the Milwaukee River Basin a D+ grade from Milwaukee Riverkeeper in the organization’s 2016 water analysis. Cheryl Nenn, the riverkeeper, discussed the group’s findings to a group of students in Engineering Hall April 11.

Although the watersheds’ report card was low in 2016, the grade has hovered around C since the grading began in 2010. The traditionally low grades typically only fluctuate a few percentage points from year to year, Nenn said.

“In general, water quality hasn’t massively changed much in the last six years or so,” she said.

Milwaukee Riverkeeper is a local nonprofit organization that works to “protect, improve and advocate for water quality,” according to its website. This is done through volunteer river cleanup days, community events near the water and the monitoring of freshwater river health.

The group tests samples from the rivers for eight different elements: temperature, dissolved oxygen content, pH, turbidity, phosphorus, chloride, specific conductivity and bacteria content. The data is then compared to the group’s goals and standards, and a percentage grade is calculated based on how many of the data points met the group’s targets. Each factor is measured because of the impact it can have on aquatic life, ecosystems and the surrounding communities if at an unhealthy level.

Each watershed was graded individually, and the three were then averaged, resulting in the overall grade. The Milwaukee watershed scored a C, the Menomonee a D and the Kinnickinnic an F.

Beyond the factors tested, Milwaukee Riverkeeper also found high concentrations of illegal and over-the-counter drugs and pesticides in the streams. These include, but are not limited to, ibuprofen, atrazine and cocaine.

Those chemicals and the high levels of bacteria are partially due to the city’s old sewer system, which has overlapping sanitary pipes and storm water drains in some areas. Although the system isn’t designed to allow the mix of pollutants, according to Professor Dave Strifling, it can still happen.

“Under normal conditions, all this water is treated before it enters surface waters. But sometimes heavy rains can overwhelm the system, and the resulting overflows deliver pathogens to our waterways,” Strifling said.

Milwaukee has some ongoing initiatives to make the sewer system eco-friendlier, such as Green Infrastructure, which aims to collect storm water rather than let it flow untreated into the rivers and creeks. Strifling, however, said failing sewer systems are an issue in older cities across the country.

“(The Environmental Protection Agency) recently estimated that we need to spend half a trillion dollars on drinking water infrastructure alone over the next two decades. The infrastructure is ‘out of sight, out of mind’ and often doesn’t get the attention it deserves until disaster strikes,” Strifling said.

A pollutant that led to the Kinnickinnic watershed’s F rating that did not contribute to the others’ grades was undesirable chloride levels, which is due to the amount of salt put on roads during the winter. The salt ends up in the water when snow and ice melt. The Kinnickinnic’s levels were likely high due to the urban area surrounding the river.

Strifling said reducing the use of road salt to help the environment is difficult due to its relationship to public safety.

“We need our roads to be safe. On the other hand, applying excess salt certainly causes water quality problems that are worsening with time as the cumulative salt load increases,” he said. “We need to find the right balance.”

Other cities in Wisconsin, such as Madison, launched public education initiatives to reduce salt usage by switching to other methods of traction and encouraging people to use salt sparingly.

Two other factors that traditionally pull grades down are phosphorus and specific conductivity.

Low levels of phosphorus are ideal in freshwater streams and rivers because it can inhibit plant and algae growth, which are necessary for a functioning aquatic ecosystem. Nenn attributed the excess phosphorus to its common use as a supplement in fertilizers and its use as an additive to prevent lead poisoning. Wisconsin has taken measures to reduce its water’s concentration of phosphorus by banning the use and sale of phosphorus and phosphates in residential fertilizers.

Specific conductivity measures the water’s ability to pass electrical currents. It’s affected by the presence of charged particles in the water. These can come from rocks in the river or charged elements, such as chloride or metals, according to the Riverkeeper river reportcard.