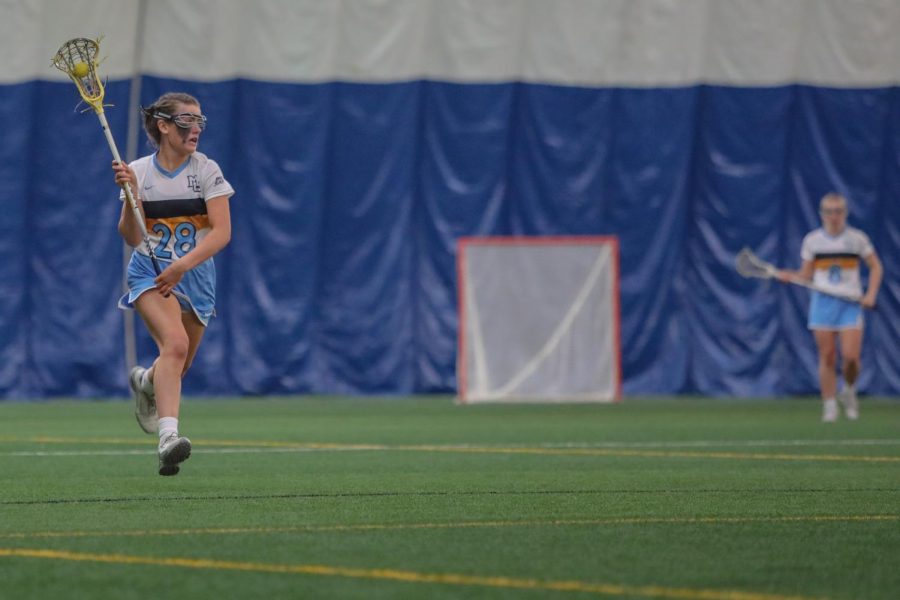 Jocelyn Miller is the only freshman to start every game for Marquette women's lacrosse. (Photo courtesy of Marquette Athletics.)

Women’s lacrosse defender Jocelyn Miller is the only freshman to start every game this season for the Golden Eagles, but she hasn’t always held such a prominent role.

Miller spent the beginning of her high school career at Eastport South-Manor High School in Manorville, New York, on the bench. It wasn’t until the starting defender suffered a torn ACL. Her coach unexpectedly threw Miller into the game, despite not even having proper footwear.

“I wasn’t even wearing turfs or cleats,” Miller said. “I was wearing, like, green sneakers.”

Once Miller got a taste of a starting spot in high school, she could not fathom the idea of returning to the sidelines. That drive is now helping her compete at the Division I level.

“It’s really hard for me to just sit on the sideline and just watch because I know what I am capable of,” Miller said. “I wanted to prove to everyone that I deserved a starting position and that they could trust me.”

Senior defender Alex Gambacorta has seen this first-hand. After just a few practices, Gambacorta told her coaching staff that Miller was one of the smartest players she’d ever worked with.

“It hasn’t felt like we’ve had to teach her much because she picked (the college game) up so quickly and had that (lacrosse) IQ that’s so important to be a defender,” Gambacorta said. “She’s definitely someone I would say I want to play with her every game.”

Miller developed her lacrosse IQ at a young age from her father, a former lacrosse player at St. John’s. Those fundamentals from her father fortified her to start playing club lacrosse in seventh grade and fully grasp her collegiate career potential.

“I always knew my whole life that I was going to play (in college) just because my dad always pushed me to play,” Miller said. “I was really shy and I still am. So, it was kind of me like getting out of my comfort zone.”

Spectators would be hard-pressed to observe Miller’s shyness in her playing style. She plays an aggressive game, blanketing opposing attackers whenever they get close to the 8-meter arc.

That aggressiveness has a downside in the form of fouls. Miller earned 54 fouls and three yellow cards through 14 games this year. At the beginning of the season, Miller was fouling within that 8-meter arc and the 12-meter fan, which frequently put the opponent on the line for a free position shot.

“My coach said to me the other day … ‘They don’t expect this little girl to run up them and start attacking them,” Miller said. “So, I think it’s just learning to control my aggression.”

Gambacorta says that controlling the aggression has been a big adjustment but she says it will make a difference in the long run.

Miller said her field awareness has already vastly improved since the start of the season. While she still fouls quite a bit, the location of her fouls have changed. Against Johns Hopkins, Miller’s fouls put Marquette on the wrong end of close-up free position opportunities. Now, Miller is fouling opponents further from the cage.

Despite the on-field challenge of limiting her aggression, Miller said the toughest challenge she had to overcome this season was the adjustment in practice from high school to collegiate lacrosse.

“The first month, I actually would call my dad after every practice crying or upset and be like, ‘I’m not playing like myself, and I don’t know what I’m doing,’” Miller said.

While Miller struggled early on, Gambacorta realized that she was making a difference on defense.

“Obviously, you wouldn’t necessarily be playing like yourself,” Gambacorta said. “But that says something that even when you weren’t playing fully yourself, you’re still making an impact.”

Miller has overcome that challenge, ranking second on the team in ground balls so far with 27. Her mentor, Gambacorta, has 26.

Despite the toughest challenges that will present themselves throughout the next three seasons, Gambacorta hopes Miller will remember one message.

“Leave everything on the field. Never to walk off knowing that you could have given more, or you had some more left in the tank,” Gambacorta said. “When you step on the field for a game, look around and have it sink in because those games go by so fast.”