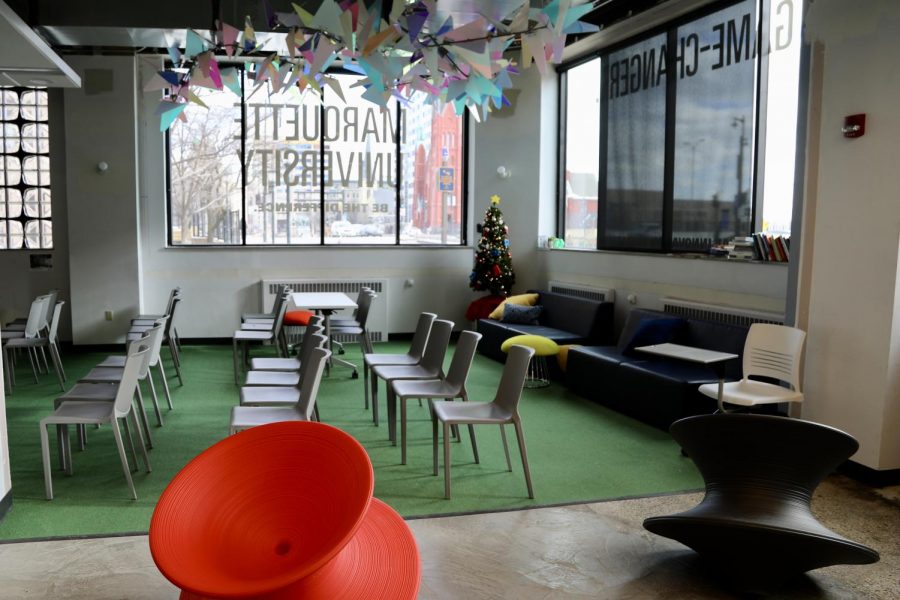 The MUnchMates team held an official launch party for their app in the 707 Hub Thursday, April 12.

In 2015, 37 percent of Marquette undergraduate students seriously considered leaving the university, according to the 2015 Campus Climate Project. Ben Zellmer said he wanted to change that.

MUnchMates, an organization created by Zellmer, a senior in the College of Health Sciences, officially launched an app last Tuesday that allows underclassmen to connect with upperclassmen over a meal. He worked on the app with several other Marquette undergraduate students.

The MUnchMates app launched April 10 and is available in Apple’s app store. The MUnchMates team held a launch party at the 707 Hub April 12.

The app allows students to search for other students by college, year in school and type of student, which includes graduate students, faculty and club or organization members, Zellmer said. Students can also search for Jesuits on campus.

“They can get together and basically make a new friend,” Zellmer said.

Zellmer formed MUnchMates during his sophomore year with the goal of reducing the percentage of students considering leaving Marquette, he said. He enlisted the help of Michael Ulrich, a senior in the College of Business Administration, at the end of his sophomore year.

“I heard about this, ironically, the last time I ever swiped for a meal,” Ulrich said. “I saw Ben, and I said, ‘Ben, what are we going to do next year? I need food,’ and he was like, ‘I have an idea.'”

Zellmer said Ulrich had more experience in app development than he did. Zellmer originally used Microsoft Yammer as an online platform for MUnchMates, but said it never really caught on.

“Yammer, I realized, wasn’t customized enough to Marquette,” Ulrich said. “So what could we do to make something that was more customized? Creating an app can do that.”

Ulrich and Andrew Webber, a senior in the College of Business Administration, began working together to develop an app that would more effectively allow students to connect with one another over a meal.

“Michael had told me about the app, and I thought it was an excellent idea. When I was a freshman here, I was part of the 37 percent who didn’t see themselves as part of the community and maybe didn’t want to stick around and stay,” Webber said.

Kelsey Otero, associate director of Social Innovation, spoke briefly at the launch party about the 707 Hub, which is a collaboration space on campus. While the students created the app themselves, the 707 Hub provided guidance and resources.

“We’re here to help you guys do exactly what the MUnchMates team has done and get ideas off the ground,” Otero said. “We can help provide whatever resources are needed to make that possible.”

Ulrich said students need to use the app for it to be effective.

“Ultimately, no matter how good this app is, the idea has to take off or the app will be pointless,” he said.

Zellmer said his vision for MUnchMates extends far past his graduation in a month.