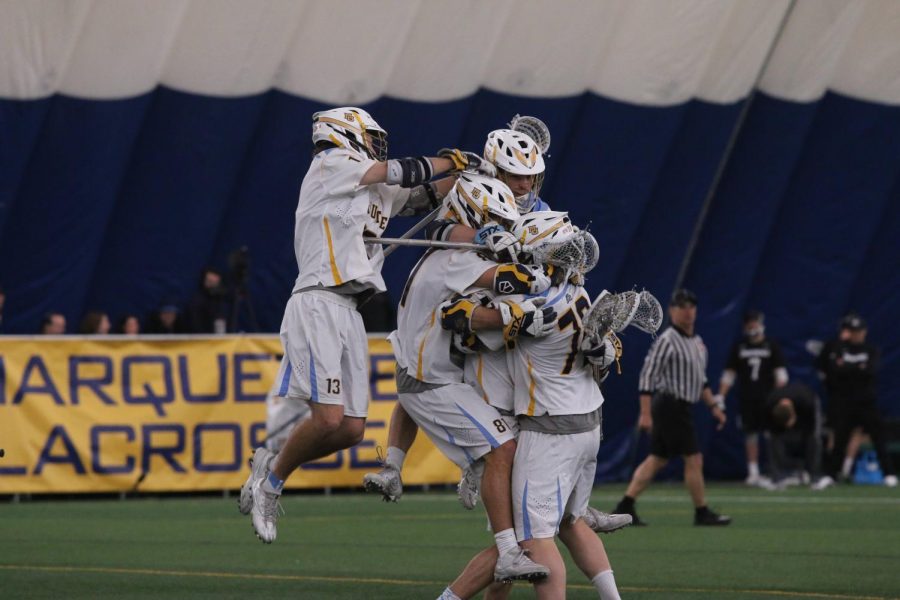 The men’s lacrosse team seemingly did the impossible when they completed an unlikely comeback by scoring four goals in the final 1:37 to force overtime against Providence Saturday afternoon.  Junior attackman John Wagner completed the comeback by scoring his fifth game-winning goal of the season and fourth in overtime, topping the Friars 12-11 at Valley Fields.

Wagner and his Marquette teammates recognized a sense of urgency and put their foot on the gas and did not let go.

“We just relied on second nature,” Wagner said. “At that point, you’re playing for more time, you’re playing on instinct rather than X’s and O’s and when we play loose and together, good things happen.”

Wagner started the comeback with his second goal of the game after the Golden Eagles pulled senior goalie Cole Blazer to add an extra attacker. 35 seconds later, it was junior Midfielder Bob Pelton, who scored his second goal of the season, making it 11-9 with just 1:02 left. Wagner added his third goal 36 seconds remaining. The comeback was completed by Griffin Fleming, who scored on a diving shot as time expired.

In the extra frame, it was Wagner who played hero once again, and won the game after he was freed by a clean pick and beat Providence goalie Tate Boyce in the top right corner of the net. Wagner finished the game with six points, including scoring four goals and adding two assists. Senior faceoff specialist Zach Melillo won 16-of-26 from the dot.

In program history, Marquette now almost has as many one-goal wins (21), as they do any other margin (24).

Marquette head coach Joe Amplo was impressed with how his team closed out the game.

“They just didn’t want to give up,” Coach Amplo said. “They said, it’s not about the result, it’s about the effort. I’m proud of them for caring about the right stuff because at the end there, we got lucky.”

The first half was all Providence as the Friars entered the second half with a 6-2 lead over the Golden Eagles and sophomore midfielder Ryan Nawrocki had a hattrick by halftime. The second half was an offensive explosion for both teams, as the teams combined for 14 goals in the half, including nine by Marquette. Sophomore midfielder Connor McClelland had three goals.

Marquette hits the road to challenge No. 5/6 Duke on Friday night in Durham, North Carolina. Face-off is set for 6:00 p.m.