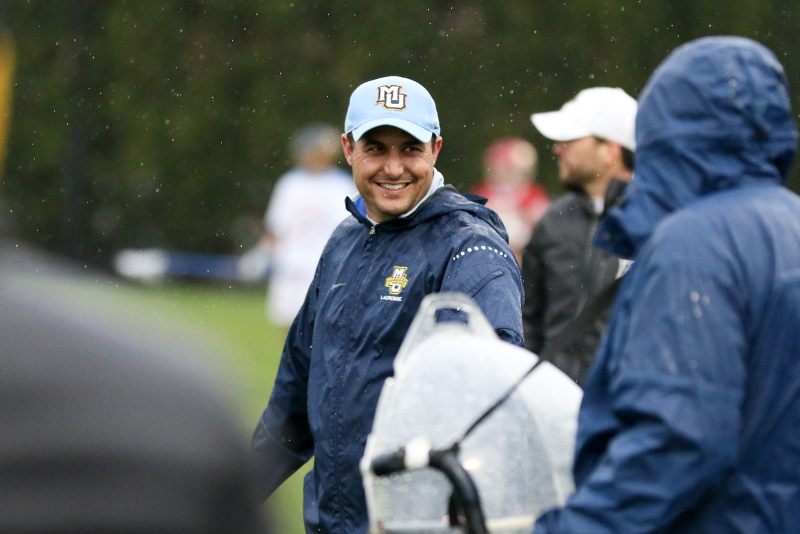 In the second outdoor night game in program history, and the first at Valley Fields, Marquette (5-4, 2-1 BIG EAST) hopes to achieve a program-first: a victory against No.14/15 Notre Dame (5-4, 1-2 ACC). The Fighting Irish have won all six games in the series that dates back to 2013, including a 15-9 victory in the first round of the NCAA Tournament last season.

The only other outdoor night game men’s lacrosse has ever played was the first game in program history against Detroit in 2013.

Marquette is coming off an 11-10 overtime victory against St. John’s. Junior attackman John Wagner scored his fourth game-winning goal of the season and helped the Golden Eagles improve to 20-7 all-time in games that were decided by one goal.

Meanwhile, Notre Dame is coming off of an 8-2 loss to Duke last Saturday, its second straight in ACC Conference play. The Irish have been known for their defense, giving up an average of 9.00 goals per game, which ranks 18th in the country. Marquette is not far behind, giving up 9.56 goals per game.

The key matchup is at the faceoff circle where senior Zachary Melillo will square off with Irish senior John Travisano Jr. Melillo is Marquette’s all-time leader in faceoff percentage and showed why against St. John’s, as he went 18-of-24 at the faceoff circle against the Red Storm. Meanwhile,  Travisano Jr. is 15th in the country in faceoff percentage, winning the draw 58.8 percent of the time.

Melillo missed three games in the middle of the season due to injury, which required sophomore Jared Hershman and senior Owen Weselak to sub in for him. As a team, Marquette has controlled 59.1 percent of faceoffs, the 12th best mark in the country.

Junior Noah Richard is another player to keep an eye on. The long stick midfielder is known for his aggressive play in the center of the field, scooping up 26 ground balls. The Golden Eagles are 5-1 with Richard starting at wing. He has picked up five ground balls in each of the last three games.

The Irish are led at attack by sophomore Bryan Costabile, who has scored 17 times for Notre Dame but was kept out of the Duke game due to injury. It is unclear whether he will return for tonight’s game. The Irish also may be without junior Brendan Gleason, who scored five goals in last year’s NCAA Tournament game against Marquette.