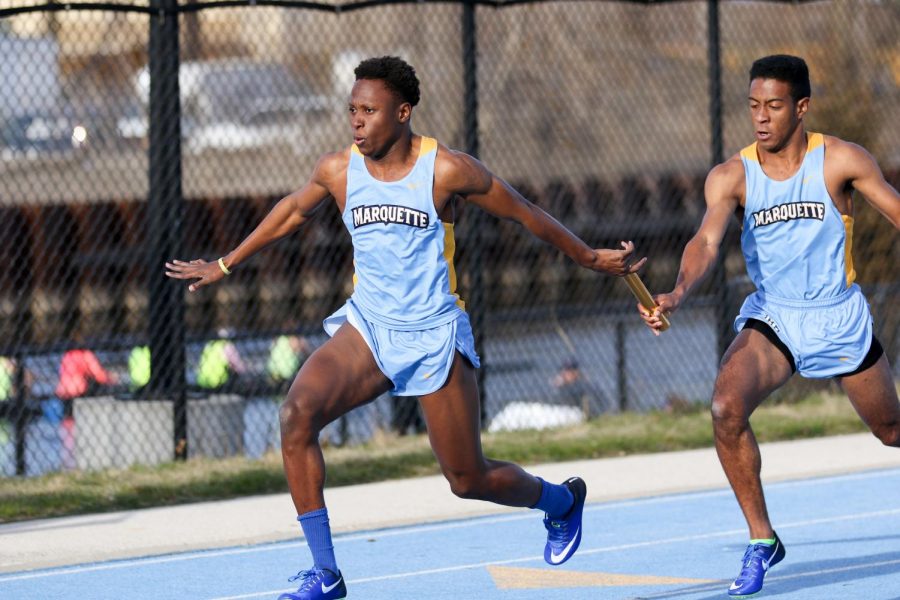 Junior sprinter Connor Boos was heading into the final baton exchange during the men’s 4×100 relay event at the BIG EAST Championships last year when he lost all power in his right leg. He pulled up. Boos hopped once, twice and landed on his feet, when he heard a sickening snap.

He clutched his hamstring as he handed off the baton to the final sprinter, Brandon Bell.

Later in the day, during the finals of the 100-meter dash, Josh Word was midway through his race when he too felt a searing pain in his leg.

Word grabbed his hamstring and walked to the finish line in absolute agony.

Both sprinters partially tore their hamstrings. From side-by-side trainers’ tables, two of the most prolific sprinters in Marquette’s program history watched in the pouring rain as Marquette’s team title slipped away. What seemed certain an hour before was lost in the blink of an eye.

“It was one of those surreal moments for me and didn’t seem that it could happen,” Boos said. “Just to lose (the race and the season) in that moment was truly unfathomable.”

After months of rehabbing their injuries and competing in the indoor season, three out of the four members of last year’s record-breaking squad – Boos, Word and junior sprinter Jay Whalen – have returned to action, and they want the rest of the BIG EAST to know it, too.

“Going into the season, we all agreed that we’d keep our positions just to have that unity still there,” Word said. “We’re testing out that last piece of the puzzle, and hopefully we’re going to get there soon enough. All of us are faster individually than last year, and our speed is there.”

The 4×100 team proved Word right by taking second place in Florida at the UNF Spring Break Invitational a month ago with a time of 41.7 seconds, just a second slower than they were in the 2017 Wisconsin Twilight meet, the last one before Word and Boos’ injuries. The duo said they are looking for a chance to prove they belong again.

“That’s the beauty of the 4×100,” Word said. “As soon as we get that team chemistry down, I know we can get back to where we were and even better than last year.”

The fourth piece of the puzzle alongside Boos, Word and Whalen may be familiar to Marquette men’s soccer followers: Jason Davis. The graduate forward from England played one season in Milwaukee before handing in his cleats for track spikes. Davis said he understands how important the chemistry is in a tight-knit unit like the 4×100.

“I’ve been in hundreds of teams, and this is probably the best, I would say, in terms of chemistry and everyone getting on,” Davis said. “It’s definitely a positive that I joined this team.”

Recovering from injury took awhile for Boos and Word. Boos said he is now fully fit after the indoor season, and Word made a much quicker recovery. The Chicago native won the 6o-meter dash at the BIG EAST Indoor Championships in February with a time of 6.86 seconds and finished in fifth place in the 200-meter dash.

“Thankfully, I’ve come back, and I had a really good indoor season,” Word said. “Having these positive experiences this year, with winning the 60-meter dash at the BIG EAST Indoor (Championships), make coping with the memories of last year easier. The ‘what ifs’ are substituted with ‘what I can do now.'”

It took Boos and Word a long time to come to terms with how their season ended, but Boos said it made them stronger.

“In one of the worst experiences I could have had, I found how important track was to me and all these people around me,” Boos said. “Most of the summer was working (for) this season to try to get (a BIG EAST Championship) for all those people who should have had it last year.”

With the BIG EAST Championships looming on May 11 and 12, the opportunity for redemption is just a month away.

“Winning the 4×100 would be the ultimate satisfaction,” Word said. “After everything last year, a BIG EAST title would be the icing on the cake. I’m counting down the days until the BIG EAST (Championships).”

“We wanted to win so bad last year, but this year, Josh, Jay and I have come back even more hungry,” Boos said. “If we can reach that goal, and I think that we will, that will be amazing.”