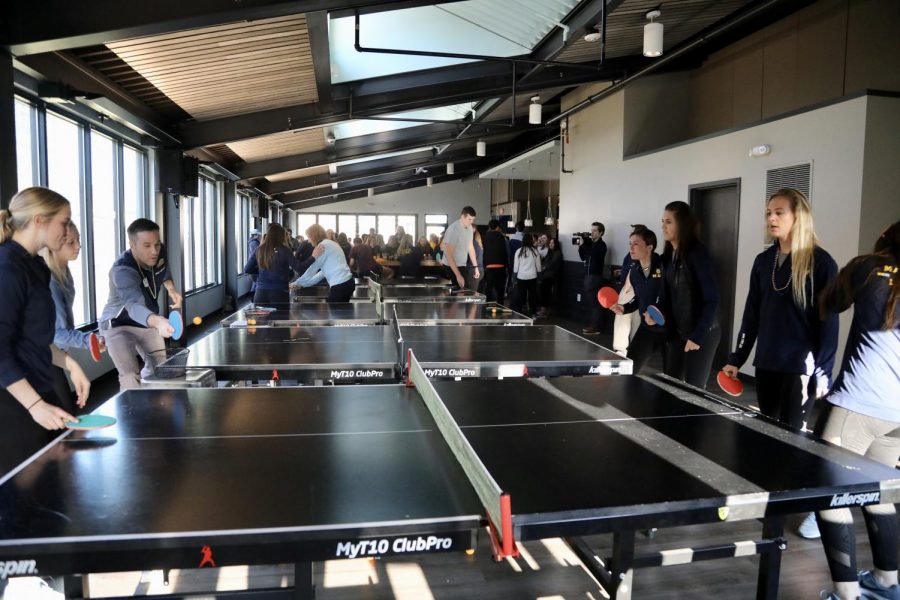 Women's lacrosse carried over their staff games of pingpong from the office to Evolution: Milwaukee.

The women’s lacrosse team hosted a team fundraiser last Friday for a potential preseason trip to Australia in the summer of 2020. The event was held at Evolution Milwaukee, a pingpong venue on N. Old World 3rd St.

While the event raised over $2,000 at the time of print, it’s not the only reason the team has to be excited. The Golden Eagles are 9-4 overall and 5-0 in BIG EAST play, which are the program’s best records since it started competitive play six seasons ago. The possibility of the program’s first trip to the BIG EAST Tournament is looking stronger every game.

It was the perfect team bonding opportunity before the team’s game against Vanderbilt the following afternoon.

As soon as head coach Meredith Black needed a fundraiser idea, she knew it had to be something familiar and exciting for the team. Table tennis was the immediate answer. “My staff thought of pingpong because we love it,” Black said. “There is a table in our offices, so we get to play a lot, and figured it’s a fun, competitive way to get people together.”

Marquette’s athletic department will pay for some of the journey, but the rest must be raised through donations from fans.

A trip overseas isn’t only about the lacrosse matches, although there will certainly be plenty of them. It’s also about the cultural immersion, which men’s basketball experienced on its overseas trip to Europe three years ago. The volleyball team took a similar voyage two years ago, playing teams of varying skill levels in Italy and the Czech Republic.

Sophomore defender Erin Dowdle said she believes this could be a great experience for her team. “The trip will allow our team to bond and grow even more,” Dowdle said. “We will make memories that will last a lifetime and experience a different culture together.”

Black similarly emphasized the importance of the Australia trip. Because of class schedules, NCAA restraints and the hectic pace of a season’s schedule, the team doesn’t have the opportunity to gather together and bond in a non-lacrosse context, which Black thinks is key for chemistry.

“It builds team culture and the family environment that we look to create here,” Black said. “It also allows friends and families of the program to see and get to know our players in a different light. For a foreign trip, it is a great opportunity for our players to learn about other cultures and to explore the world.”

This is not the first overseas trip for the program. The team went to Italy in the summer of 2016. NCAA rules allow one overseas trip every four years, with the idea being that every four-year player gets an abroad experience that their class and athletic schedules wouldn’t usually allow.

“I am looking forward to traveling to a different country with my teammates and best friends,” Dowdle said. “The upperclassmen have shared so many stories of their experience in Italy, and I am hoping to have a positive experience just like them. It is such a great opportunity that I might not have without Marquette lacrosse.”