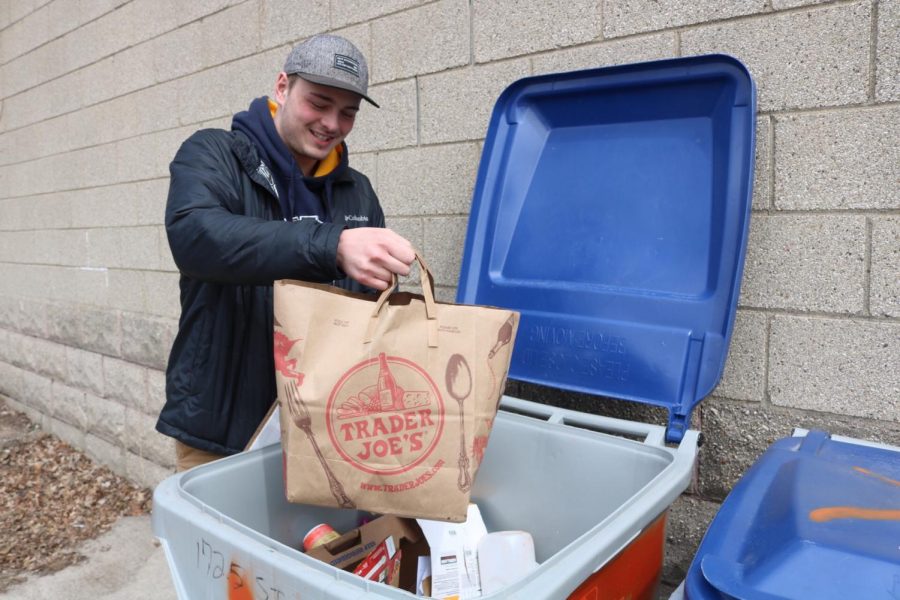 If students' recyclables are contaminated, maintenance employees are required to throw them in with the garbage.

Every few years, students become suspicious of whether or not trash and recycling are really separated, Rick Arcuri, executive director of business operations and auxiliary services, said.

“It’s a cyclic thing where a student will notice it, and oddly enough, it always comes out of (Schroeder Hall),” Arcuri said.

Brent Ribble, campus sustainability coordinator, said in an email that this suspicion is common among many colleges and universities, but it is mostly untrue at Marquette.

Ribble said that if a student sees a staff member combine trash and recyclables together, the reason is probably that someone contaminated the recyclables with food, liquids, grease or dirt.

“Our residence hall staff and custodians care about recycling just as much as our students do,” Ribble said.

However, the misperception persists and affects the way students think about trash and recycling.

Nicolle Kaytsner, a junior in the College of Health Sciences, is the public relations representative for Students for an Environmentally Active Campus.

Despite her involvement in environmental causes, Kaytsner speculated whether trash and recycling are disposed of separately. She said that recycling is frequently discussed at SEAC meetings, and it feels like an overwhelming issue to tackle.

The issue is not just systemic, but also personal for Kaytsner.

During her sophomore year, Kaytsner said she was “heartbroken” when she went to dispose of her trash and recycling in the basement of Schroeder Hall, and a member of maintenance staff told her to put her bags anywhere because it “doesn’t matter.”

“It just hurts to see when you try so hard on your level to do things, but behind the scenes, it’s just thrown away,” Kaytsner said.

Arcuri said incidents like Kaytsner’s contribute to skepticism about the trash and recycling process.

Arcuri added that there would be no financial incentive to have a recycling compactor outside of Schroeder Hall if it wasn’t being used properly.

Some students may remain apathetic to recycling and other environmental endeavors despite efforts by the university.

Cartan Clarke, a sophomore in the College of Communication, said he’s “extremely indifferent to environmental issues,” but said he still recycles out of habit.

Clarke said that even if representatives from Marquette were to come forward and confirm that trash and recycling were disposed of separately, he still wouldn’t believe them.

Ribble said there are a number of ways students can make Marquette a greener campus, and not all of them are related to increased recycling and composting efforts.

Ribble said students should focus on producing and consuming less. For example, Ribble recommended eliminating two disposal items from daily use and carrying around reusable alternatives.

Marquette Sustainability is developing signs to educate students on recycling and is in the process of introducing a campus sustainability plan. One of the primary goals of the plan is to decrease waste in landfills.