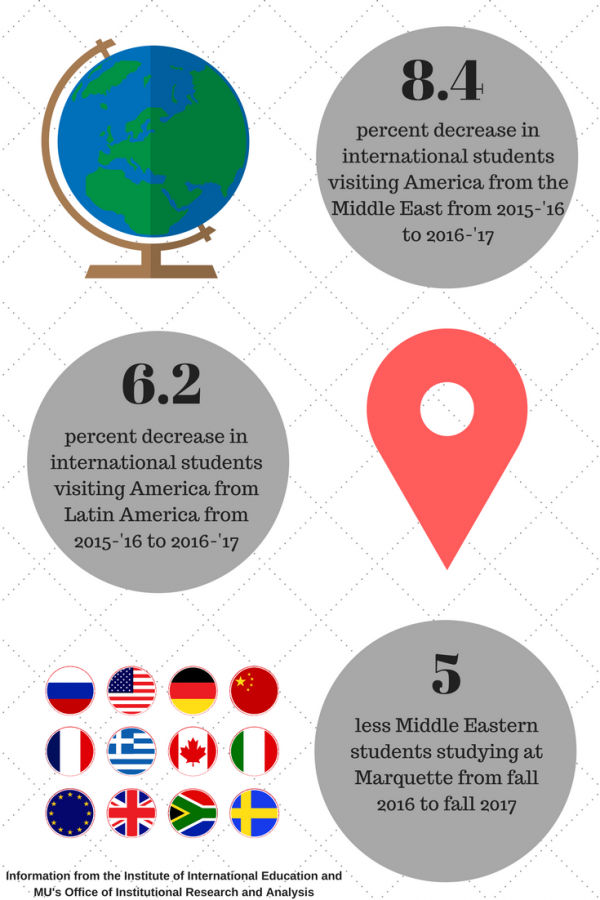 Professor of social and cultural sciences Louise Cainkar said she sees a correlation between the decline of international enrollment and Trump’s administration. That decline can be seen in both national and Marquette numbers. Graphic by Jenny Whidden.

Sara Atshan an Arab-American junior in the College of Arts & Sciences, said since Donald Trump was elected president of the United States, she has seen an overnight change in how she is treated.

“Ever since the day of the election, I’ve gotten more comments thrown at me,” she said. “I’ve always been stared at, but it’s been much more open now.”

American universities have seen a decrease in enrollment from Latin American and Middle Eastern countries of just over 6 percent in 2016-’17, according to the Institute of International Education’s Open Doors Report.

Louise Cainkar, a professor of social and cultural sciences, said she sees a correlation between the decline of international enrollment and Trump’s administration.

“It’s very clear that right now, the two groups that are the subject of so many executive orders and enforcement mechanisms are Latinos and Middle Eastern people,” Cainkar said. “I’m sure that there’s a perception that the U.S.’s government and a lot of the population are very hostile to Middle Eastern people these days.”

According to the Office of Institutional Research and Analysis, Marquette international students from the Middle East dropped from 29 to 24 between 2016 and 2017. Students from Latin America remained at 21.

Cainkar said because of this perception, many international students will likely attend universities in Canada or Europe rather than in America. She said in the long run, other western countries will benefit from the United States’ policies, while the United States will lose out.

“I think those other countries will reap the benefits of this, and we’re going to lose in status and prestige and talent,” she said.

Garcia said while she personally hasn’t been affected by the repeal of DACA, she sees how international students could perceive the United States differently because of it.

“If (Trump) is not even supporting those who have been in the United States their whole lives, how is he going to support international students?” she said.

Atshan said many Arab-Americans have faced the same experiences. Atshan’s parents immigrated to the United States from Palestine 25 years ago. She said she has seen a change in her relatives’ perceptions of the United States.

“I think if I was born and raised in the Middle East, I definitely wouldn’t want to come here,” she said. “Even knowing how my family back home talks about the United States, it’s always been this place where we have gold growing on our trees, and everyone is rich and free to express themselves, and it is, but I’ve definitely seen a change in the past few years with Trump.”

Atshan said she thinks the election allowed people in this specific region of the country to embrace being racist.

“Especially in the Midwest, we’ve always had this passive-aggressive soft racism, where people will tolerate you, but they won’t really accept you,” she said. “Since the election happened, people have gotten the green light to be more open with their racism.”

Atshan said that though she receives her fair share of hate, she has also seen many acts of kindness.

“A lot of people who see what’s going on and don’t normally speak out feel like they need to speak out,” she said. “They’ll come up to me and say, ‘I just want you to know that I support you.’”