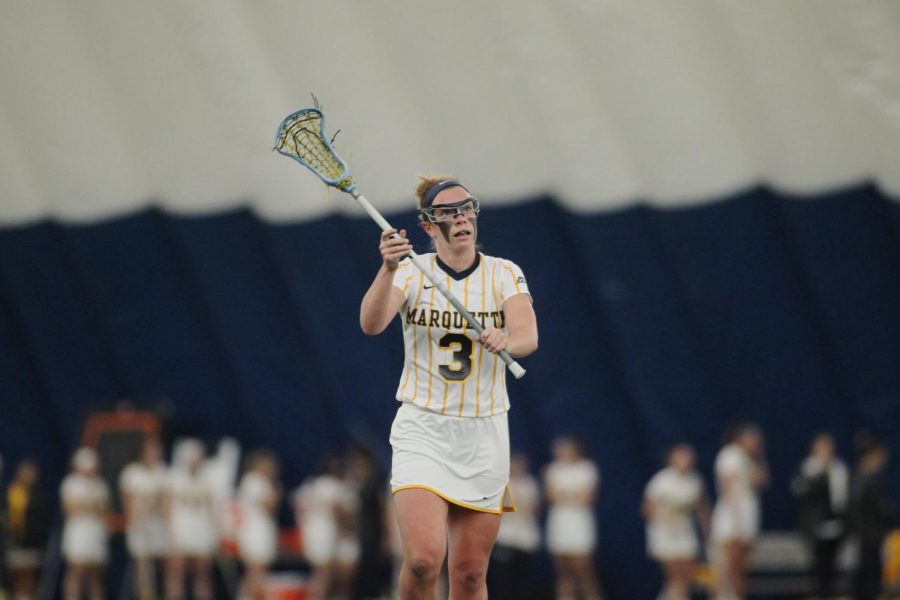 Coming into Saturday’s game, the Golden Eagles were locked in a three-way tie in the BIG EAST conference with Temple and No. 8 Florida. After an impressive 16-4 win over the Temple Owls (7-4, 2-1 BIG EAST), the Golden Eagles (7-4, 3-0 BIG EAST) are tied only with Florida for first place in the conference.

“We lost to Temple in overtime last year, so I think that was in their minds just a little bit, enough to propel a really strong start,” head coach Meredith Black said.

The Golden Eagles scored 11 goals in the first half to help secure the victory. Junior midfielder Grace Gabriel and sophomore midfielder Megan Menzuber each earned hat tricks in the opening 30 minutes.

“We’ve been really working on trying to jump on them early and think that we actually did that today,” Gabriel said. “We hadn’t done that in past games and that made a huge difference. Once we got on top, there was no chance for them to come back.”

Marquette got on the board 14 seconds into the game with a goal from senior midfielder Allison Lane, who scored another one two minutes later for her 24th of the year.. Menzuber and Gabriel each put one in after that to make it 4-0 after just six minutes. Temple finally ended the run with a goal from sophomore Meghan Hoffman at the 23:25 mark, but Marquette dominated possession after that. Menzuber scored two more goals and Gabriel notched one while the Golden Eagles prevented Temple from finding the goal for over 10 minutes. Marquette went into the locker room with an 11-2 lead.

Temple opened the second half with a quick goal from freshman Maddie Gebert, but Marquette answered back with another goal from Gabriel, her fourth of the day, to blunt any hopes Temple had of generating a lead-threatening run.

Controlling the middle of the field was important for Marquette’s success against the Owls. The Golden Eagles controlled 15 of 22 possible draws.

Marquette goalkeeper Julianna Horning had a solid game, playing the full 60 minutes and recording 10 saves. “She was figuring some stuff out in the beginning of the season, but now has just dialed in and knows her strengths and is using them,” Black said.

Temple switched out redshirt sophomore Kelsea Hershey towards the end of the first half with sophomore Maryn Lowell.

The Golden Eagles will hit the road this week to take on Butler on Wednesday in Indianapolis, Indiana.