A day in the neighborhood of South by Southwest 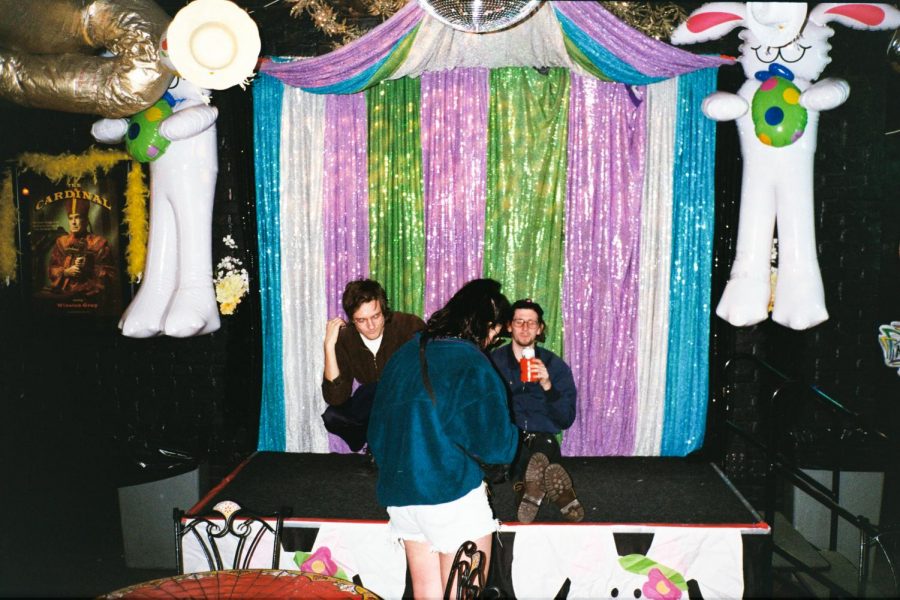 Members of Vundabar (seated) and CJ Harvey in New Orleans

In a van full of Florida oranges, crawfish carcasses, and Buc-ee’s gear and snacks, a group of young men and a young lady set out to travel to Austin, Texas, for one of America’s biggest cult gatherings. The cult is indie music. The gathering: Austin’s annual South by Southwest Festival — known colloquially as SXSW. The people there are mostly warm, understanding, open minded and immensely talented. They enjoy binge-drinking (business is pleasure), melting faces and playing tunes for all to hear. There’s never been a better time to be an indie musician.

Much like a human mind and its endless synapses, the industry is interconnected. Everyone knows everyone, and the world is two people away, not the usual seven. The music is wonderful. Some people try to write it off and say it’s all derivative, but what isn’t? The indie music world is like one big family.  Photographers, graphic designers and artists are like cousins to the immediate family of the band.  The only requirements are kindness and basic human decency.

Before the fun can happen, bands traveled from far and wide, sleeping but a peep on the yellow brick road. They arrived hoping to find cheap diner food, but were met in Austin with artisanal grits and $4 wheat toast. Morale was low, hunger was high and pockets were thin, only to be emptied further by the fact that they took home no money for many of the shows. All that sweet nectar flowing from the bottles and cans in venue bars, and not a nickel makes it to the artist. The payment there is the potential for exposure. Every showcase, every event, every venue at SXSW has someone in the industry hoping to find the prize pig. It’s not quite so primeval or creepy, but you really never know who might be hiding in their red and white-striped shirt watching the show.

After a 10-hour trip from New Orleans, the aforementioned group (the touring party of Boston-based group Vundabar) had their first show at Hotel Vegas on Austin’s east side. Despite some minor technical issues, the concert was a success. One down, two to go (for day one of four, that is). No time to enjoy the successful feeling, off to the POND magazine showcase, a do-it-yourself backyard bonanza run by a couple of lovely ladies from New York. Looking to change their three-day-old underpants, and maybe even get a shower afterward, the band counted on the generosity of a fan named Jason. Greeted with comfortable beds, clean towels and a kind-hearted family, Jason’s abode was a blessing to call home during the storm of SXSW.

Then, it was 1 a.m., and the biggest stage of the day. Vundabar played their last set, crushed some bottles of water, brushed their teeth, and drifted off into a well-deserved sleep. The next day, they woke up and did it again. It is SXSW, and people are going to enjoy themselves through the blood, sweat and tears.

Day three hits, and people have accepted that they would see probably 30 percent of what they wanted to (of both friends and shows). The routine has already become old hat for the band.  Drink tickets? They knew the drill. Cheapest food? They didn’t know the drill because it doesn’t exist. Tacos? Tacos were being inhaled in record time. The brisket kept flowing. It appeared that the sweet citrus of Austin was being squeezed to its last pulp that week.  Even at its final pulp, the music didn’t seem to want to end.  At this festival, the music was very much a living, breathing thing, because it’s made from living, breathing things.

It’s always interesting to see what fans come from the woodwork to attend these festivals.  The style of all involved is impeccable. There was a 70-something sporting a tuxedo and a red bowler, and a 60-something with Keen sandals, cargos and a hat that appropriately denoted, in the spirit of a true minimalist, “DOGS.” There were 30-somethings in tightly-checkered flannels, along with 20-somethings in shirts that bear rainbows, embroidery or any random ’90s meme. Most attendees looked like they were involved in a carefully manicured roll-in-the-dirt session to acquire what can best be referred to as a dirt-glow.

Once the playing halted for enough time to catch a breath, some catch wind of a “castle party.” Upon arriving at the castle that evening, people were greeted by many strange and wonderful sights that felt inherently unique to the SXSW experience. While sauntering about the grounds, a lot of the faces that had been on stage, behind lenses and running many of the week’s events and concerts were seen similarly trudging around the property. People were happy to be almost done with the week, most nearly enjoying each other’s company in this festival oasis. It gave the people running the week behind the scenes an opportunity to take a deep breath among the madness and non-stop action of the festival.

That’s what the festival is: A marathon with a bunch of manic sprints in between. After a performance, pleasantries are exchanged, fans approach, rinse, repeat.  The festival tests what it means to be a musician, music fan and a music lover.

It’s amazing the number of people and perspectives that are there. The festival could be broken up by genre and last a month, but it would still feel like it wasn’t enough time to experience it all. It’s like going to a good all-you-can-eat buffet. It’s the festival for music gluttons. Want some rap? Sure, the best up-and-coming talent from anywhere is here. Oh, you would like a little indie? Well, you had better be Augustus Gloop, because you’re going to get filled to the brim until they have to roll you to your plane. Name any genre. It’s there.

The world is an oyster bestowed to the SXSW-goer to do with as they please. Unfortunately, doing this festival without a badge or wristband means Six Flags-esque waiting for concerts, cover charges and a wholly different experience. But the beauty of this place is that everyone can make it as special as they want.

Overall, there isn’t much to do at South by Southwest.
﻿