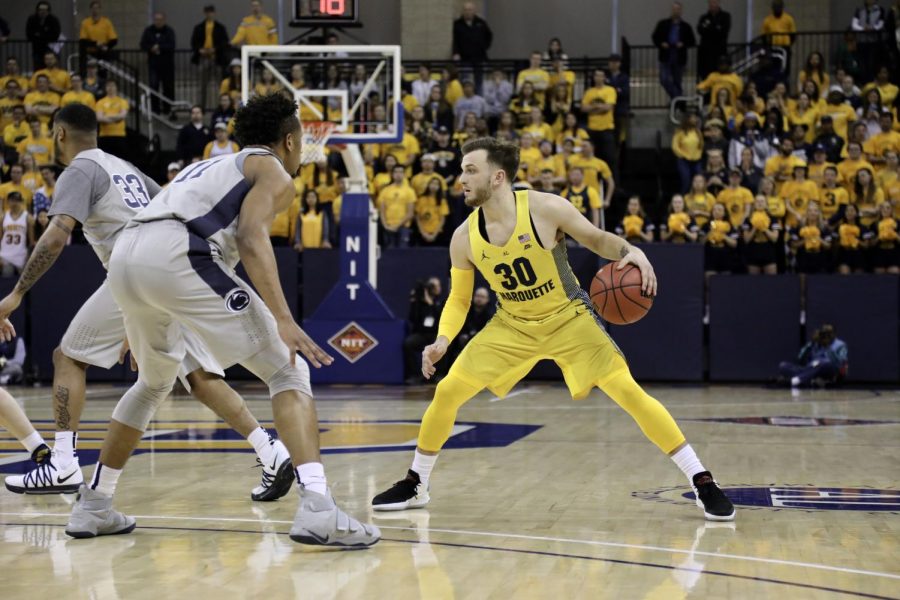 When Andrew Rowsey took his jersey off in the locker room after Marquette’s NIT loss to Penn State, he thought it would be the last time he represented the Golden Eagles on a basketball court.

However, Rowsey will have one more chance to play college ball next weekend in San Antonio. He’ll be competing solo in the 3-point contest and as part of the BIG EAST squad during the inaugural 32-team, three-on-three tournament.

“It’s a once-in-a-lifetime experience for me, being able to do something I’ve never been able to do in my career,” Rowsey said.

Each conference has a team, which will compete against each other in pool play for the preliminary rounds. The top finishers in each pool will advance to elimination play. Pool rounds are Friday and Saturday while the championship bracket tips off Sunday afternoon.

Rowsey will team up with Xavier’s Trevon Bluiett and J.P. Macura and Seton Hall’s Desi Rodriguez. All four players are graduating seniors and have no remaining collegiate eligibility. That will allow them to compete for a considerable amount of money. Each victory earns the team $1,000 to split, and the team that wins the championship will take home $50,000.

“I might actually play a little defense this tournament,” Rowsey said with a chuckle. “This is the first time my entire life I’ve ever been able to play for money, so it’s definitely going to bring out another level in me.”

Because of the BIG EAST’s double round robin conference play structure, Rowsey has played against Bluiett and Macura four times in his two years of eligibility at Marquette. He’s seen Rodriguez five times: twice in each regular season and once in Marquette’s 2017 BIG EAST Tournament loss.

According to Rowsey, the familiarity with each players’ games from prior experiences will lead to better performance on the court.

“You definitely gain that relationship when playing against people throughout the BIG EAST, especially when they’re players you respect and players that you look at,” Rowsey said. “I would definitely say that helps a lot.”

Playing with Macura will be an especially interesting experience for Rowsey because the two have a well-documented history of playing with emotion on the court. When asked if he and Macura can get under opponents’ skin, Rowsey laughed and said, “Yeah, we can do that.”

What happens after Final Four weekend concludes is slightly murkier. Rowsey will be participating in the Portsmouth Invitational Tournament, a four-day basketball tournament for the nation’s top graduating seniors in New Hampshire. NBA scouts will have an opportunity to evaluate him at that point.

Rowsey has not yet hired an agent, nor does he have a timeframe when that will happen. He compared it to the experience of being in high school and getting calls from college coaches without any real idea of how to handle them.

“It’s a process I’ve never been a part of and it’s a process I’m learning things about each and every day,” Rowsey said. “Me and my parents and my family are trying to figure out what’s best for me.”

Going forward, Rowsey hopes to play basketball at the highest level he can. “That’s been my goal since I first started to walk, so that goal is definitely not changing now.”

For this week, though, all that matters is wearing a Marquette uniform one last time.

“Being able to put (the jersey) on and represent Marquette at another event whether I’m playing with my teammates or not means a lot.”