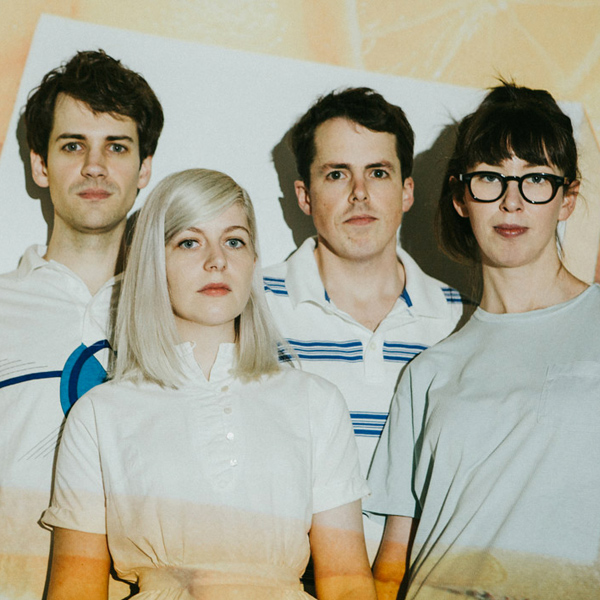 The Canadian dream pop band, Alvvays, graced Milwaukee with their presence March 24 at the Pabst Theater. Upon taking the stage, front woman Molly Rankin said, “It’s great to be here,” followed by a joke about how she has the same chandelier hanging in her living room. “We usually play in basements,” she added, obviously in awe of the beautiful venue.

From there on out, Rankin was absolutely charming. Her stage presence was important too, as the theater was almost completely full, and it would have been easy to feel distant sitting in the way back of The Pabst. Aside from her witty jokes and charming stage presence, Rankin’s voice was flawless throughout the band’s 17-song setlist. She also played lead/rhythm guitar without fail on all but one song where she ditched the instrument and focused solely on singing.

Alvvays opened with their song “Hey,” from their 2017 (and most recent album) “Antisocialites.” This isn’t necessarily the most obvious choice for an opening song, as it’s certainly not their heaviest, but the band used it to give the crowd a proper greeting with it’s fitting title and lyrics.

“In Undertow” was definitely one of the most impressive songs of the night. This was to be expected as it is one of the band’s most popular new songs. Rankin’s voice shone bright on this as it is a song that challenges her range in high and low notes. Rankin hit all of them as usual, including the song’s ending note which goes up very high as she sings the lyrics “no turning back.”

Another notabale aspect of Alvvays’ show was their keyboardist, Kerri MacLellan. A lot of bands tend to have their keyboardists at the back of the stage or off to the side. But due to MacLellan’s large role in the band, she was front and center right next to Rankin all night. While MacLellan’s key skills were impressive, it was her backup vocals that complimented Rankin’s voice so well and really caught the listener’s ear. The two of them clearly have a lot of chemistry. About halfway through the show, Rankin introduced MacLellan and asked the crowd to give her a hand. She never introduced any of the other members.

They are worth mentioning, however. Guitarist Alec O’Hanley traded back and forth with Rankin throughout the night on rhythm and lead guitar. Brian Murphy was steady on bass all evening long, and the band’s relatively new drummer, Sheridan Riley, left the crowd with nothing to complain about either. Riley joined the band in 2017 to replace ex-drummer Phil Maclsaac. Riley’s speed and tempo were especially noteworthy during the show.

Rankin did a nice job of breaking up their songs with some entertaining stories and jokes. At one point, she told a story about the band crossing the U.S.-Canadian border and how it wasn’t the most smooth experience due to her bandmates’ tendency to make jokes at the wrong time. Even with these anecdotes, the show felt short. This is likely because  the majority of Alvvays’ songs are “short and sweet.” This seems to be the flawless formula for their dream pop, beach rock genre. Including the encore, which was two songs long, the entire show was just under 90 minutes.

The underdog song of the night would have to go to “Saved by a Waif.” According to Apple Music, this is the band’s 15th most popular song out of just 19 total. However, the whole band seemed to shine on their individual instruments during this track. The verses allowed Rankin to sing softly while the band carried an upbeat tempo through the venue. As the chorus came in, Rankin exclaimed her lyrics “you cut your hair, now you look like a little boy.” The song’s abrupt ending left the crowd blown away. I definitely overlooked this excellent song before seeing it live.

Alvvays definitely offered more live than meets the ear on their recorded albums. On their classic song “Archie, Marry Me,” Rankin added a distorted whammy bar sound that is unique to the live performance of the song. The most surprising part of the show for me, was the atmosphere. As crowded as it was, not many people were dancing, even up front in the non-seated area. Some people sang along with Rankin, and swayed back and forth a bit. But for the most part, everyone seemed to be in too much awe of Rankin and her astounding vocals. It was a large group of concertgoers simply there to enjoy the music. And Rankin had a hypnotic affect on the crowd, as it was hard to take your eyes off of her with her black and white referee-like shirt.

Overall, Alvvays put on a great show. Rankin’s voice was the highlight of the night. She could sing the alphabet or “Mary Had a Little Lamb” and it would still sound great. If the band returns to Milwaukee, do yourself a favor and buy a ticket.