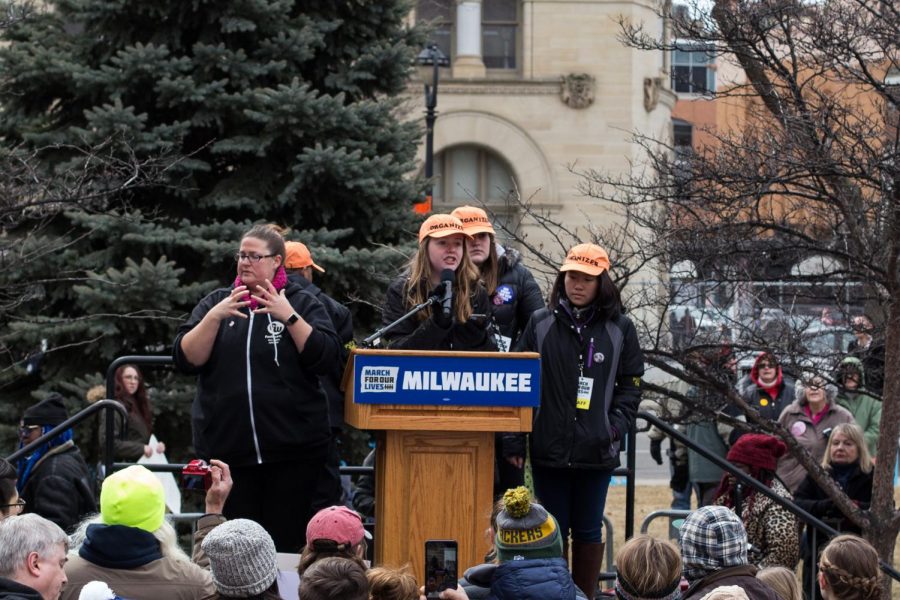 Two Marquette students were the lead organizers of Milwaukee’s March for Our Lives, a protest against gun violence and a call for tighter gun control Saturday, March 24.

Survivors of the Stoneman Douglas High School shooting organized March for Our Lives in Washington, D.C. Hundreds of sibling marches across the nation sprung up in response.

“The day after the Parkland shooting, and the days following when the Parkland kids were saying they were going to do March for Our Lives,” Stanton said, “I literally texted my friend Izzy … let’s start a march.”

The march began at the Milwaukee County Courthouse and ended in Red Arrow Park, across from City Hall. Thousands of protesters walked along the streets, chanting “books, not bullets” and “this is what democracy looks like.”

Stanton and Staton were joined by two Milwaukee-area high schoolers, Marvell Reed, from the Barack Obama School of Career and Technical Education in North Milwaukee, and Sophia Zhang, from Homestead High School in Mequon. They coordinated their own schools’ movements against gun violence.

“The four of us worked tirelessly to coordinate this march,” Reed said at the protest. “(Now) we stand here demanding change.”

Staton said she wanted to make this march happen so that no one feels at risk in public spaces, especially schools. While the protest was inspired by recent high school shootings, march organizers pointed out that this was a push to end gun violence in all aspects. The march paid tribute to the victims of the Orlando nightclub shooting in June 2016 and the Las Vegas concert shooting in October 2017.

“People are dying every day from gun violence,” Staton said.

Many Marquette students were among the thousands of protesters. Vivian Walbrun, a sophomore in the College of Arts & Sciences, took her eighth-grade sister with her to the march. She said the thought of her sister being attacked during school is frightening.

“Like everyone here, I’m so sick and tired of every month having dozens of kids murdered, each time by someone with a gun,” Walbrun said. “I don’t want my little sister going to school and getting shot. I want to know that she’s going to be okay.”

Another student, Nicolle Kaytsner, a senior in the College of Health Sciences, said she is an indirect victim of gun violence. She said one of her friends was shot and killed in a drive-by shooting, and her death helped inspire her to march. Her friend was 15 years old when they were killed.

“It’s hard to come here and see that this happens to people that we know,” Kaytsner said. “It can easily happen to any one of us.”

Stanton said she thinks one of the most powerful things anyone can do to have their voice heard is to vote. Voter registration was held at City Hall during and after the march in affiliation with the League of Women Voters of Milwaukee County, a political organization that fights voter suppression.

Early voting for Wisconsin primaries was available at City Hall during the march and will be open from March 26-30.

“We’re going to be working on increasing voter turnout,” Stanton said. “Twenty percent of people from 18 to 24 (years of age) vote in Milwaukee County. Our goal is to double that by November.”

Other future plans include another school walkout April 20 to commemorate the 19-year anniversary of the Columbine shooting. Stanton also said she hopes to play a role in making March for Our Lives a nonprofit organization that will work to prevent gun violence.

Short-term change is possible if people focus on the issue, Stanton said. She said she believes the country’s lawmakers are not giving gun control enough attention.

“I think it’s definitely possible,” Stanton said. “Just yesterday in Madison, there was a bill passed about school safety regulations, but there was no comprehensive gun reform presented in that bill. There are … opportunities to enact change that are just not being taken. I’m looking for immediate, short-term change.”