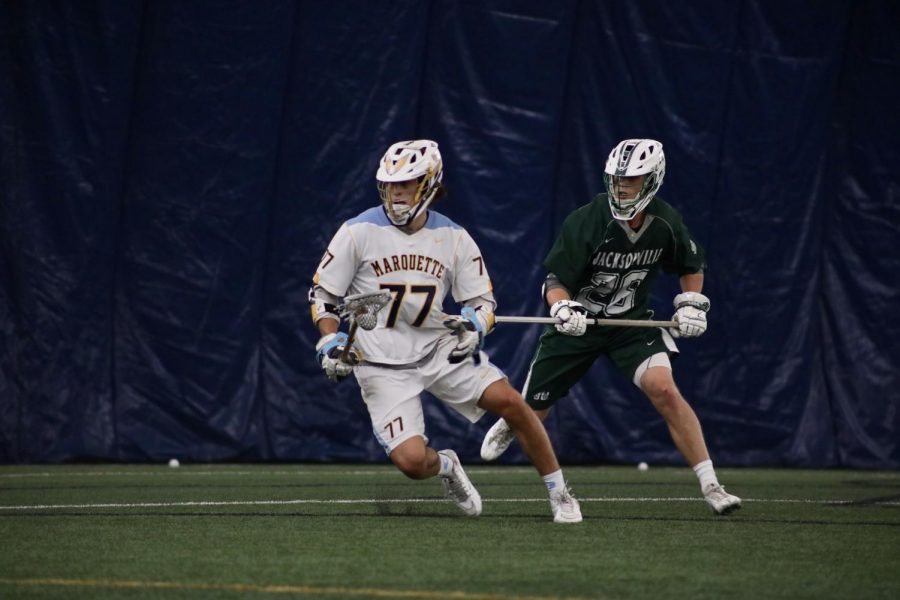 Men’s lacrosse coach Joe Amplo is familiar with one-goal games against No. 16/18 Georgetown. Saturday was the fourth time in the last five games against the Hoyas to be decided by one goal. Amplo seems to find a way to win in most of those.

That was the case again Saturday, as John Wagner’s third game-winning goal of the season helped Marquette end its three-game losing streak and walk away with a 9-8 overtime win.

“We are built on discipline and toughness and it shows,” Wagner said. “We don’t have the most skill in the world and we know that, but it’s about how hard you play and execute it and we were able to do that today.”

Marquette exhibited its toughness particularly in the first quarter when after taking a 4-1 lead after the first quarter. Wagner, Griffin Fleming, Connor McClelland and Luke Anderson all scored goals. It was a 180-degree change from last weekend, when Michigan led 6-1 at the end of the first quarter.

However, the Hoyas found an answer in the second quarter, having a 14-5 shot advantage and notching five goals in the quarter. Following four consecutive Georgetown goals to tie the game at halftime, Amplo told his team he knew the second half would be a dogfight.

“We kind of compared it to a heavyweight fight,” Amplo said. “That’s the way it goes. If it’s two really good opponents that are going after something that means something, you’re going to get that… There’s no doubt in my mind that they were going to make a run and try and fight to win this game.”

The Hoyas’ second leading goal scorer, Daniel Buccaro, scored five goals of Georgetown’s eight goals to keep the Hoyas in the game. His fifth and final goal with 12:27 remaining in the fourth quarter gave the Hoyas its first lead of the game at 8-7.

However, Marquette has found a way to respond down the stretch and they found an answer through Connor McClelland, who scored his second of the game to knot the score at eight until overtime.

In the extra frame, sophomore faceoff specialist Jared Hershman, who filled in for an injured Zach Melillo, chipped free a faceoff. Goergetown’s Gibson Smith picked up the loose ball, took a few steps, but a diving Noah Richard jarred the ball loose. Anthony Orsini picked up and Amplo called a timeout.

Then, it was John Wagner time.

Even goalie Cole Blazer, who kept Marquette in the game with 15 saves, saw it coming.

“That’s how we have the most fun and everything,” Blazer said. “That’s where Johnny Wagner steps it up in overtime and is like, ‘I’ve got this, watch out guys, watch me ball.’ That’s where we have fun, and I could see that it was coming after the faceoff win.”

Wagner beat a Georgetown defender step-for-step and scored off his signature left-handed shot.

“We played free all week and it resonated in the game today,” Wagner said. “I just went with it. There was no slide, so I tried to stick it and I did.”

Amplo has called on Wagner to step up throughout this season, and he Wagner converted again despite feeling under the weather.

“Johnny (Wagner) is a warrior,” Amplo said. “He didn’t practice the last two days, he’s been sick, he’s had a hurt back. We put some plays in for him this week and those plays, they mean a lot to me because it’s our guy.”

The win marks Marquette’s fourth one-goal win over Georgetown (6-2, 0-1 in BIG EAST) in the last five seasons and the end of Marquette’s three-game losing streak.

“You just have to keep looking forward and we did,” Wagner said.