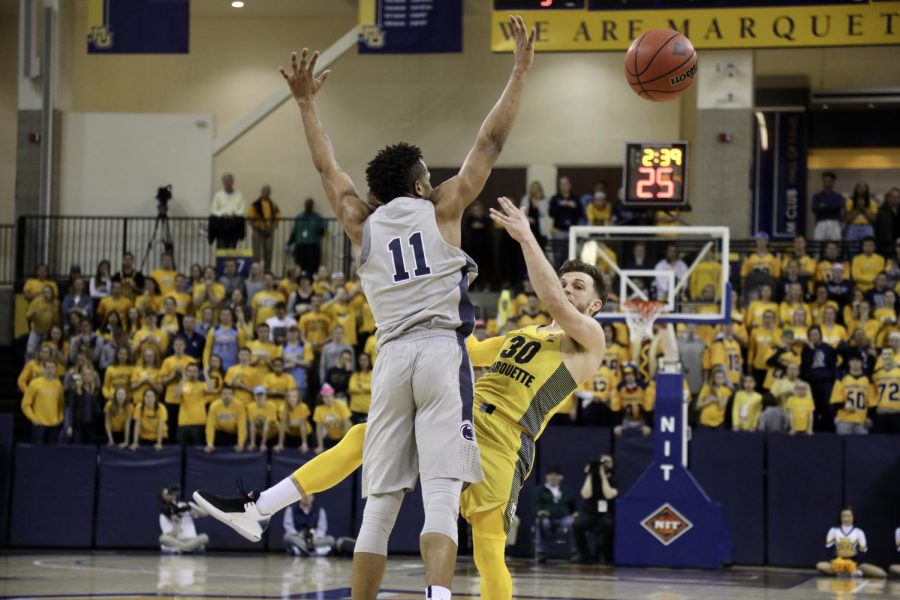 Sophomores Markus Howard and Sam Hauser propelled Marquette to the NIT quarterfinals, combining to score 1,188 points this season. A different pair of sophomores ended it.

“It’s not how we wanted it to end,” Howard said. “I didn’t want to stop playing with this team. I love this team. I think we really fought hard.”

Marquette had no answer for Stevens all game long. The forward had 12 points on 5-for-6 shooting in the first quarter alone.

The Nittany Lions’ sophomore duo was uber-efficient, shooting 21-for-37. Stevens finished the night with 30 points and played all 40 minutes.

“Carr and Stevens are two of the best in the country, and they showed that tonight,” Howard said.

Howard had the challenging Carr, who had 25 points in 39 minutes, for much of the game at the point guard position.

“His size really gave us some issues just from an aspect of guarding him from the point guard position,” Howard said. “He’s really crafty. He kind of plays at a slower pace, which puts you on edge a little bit.”

Two of Marquette’s biggest defensive flaws all season were guarding scoring-heavy stretch-fours and crafty point guards. Stevens and Carr fit those descriptions perfectly. Guard Shep Garner chipped in 19 points on 7-of-11 shooting and 5-for-8 shooting from beyond the arc. Penn State had a 40-24 scoring advantage in the paint.

“They were very physical inside,” Hauser said. “They can really finish … A lot of led to easy buckets around the rim.”

Meanwhile, Marquette failed to achieve any offensive balance. Howard and senior point guard Andrew Rowsey shot 16 for 34. The rest of the team was 12 for 27.

“When the offense is kind of stuck in a situation like that, me and him or going to have to create,” Howard said. “It was just what the game called for at the time.”

Marquette had the game at 76-70 with just 1:26 remaining. Carr missed three free throws in the final minute to even let Marquette cut the game to 83-80 with six seconds left. Rowsey’s five points in the final 15 seconds made the score look predictable, but the lone senior ran out of time to complete the comeback.

“We kind of knew that we would have to come down and try to get a quick bucket,” Howard said. “We weren’t thinking anything besides how to win the game.”

“Our guys left it all on the floor,” Marquette head coach Steve Wojciechowski said. “Our guys showed great resolve to not quit fighting.”

The loss also marks the end of the career for Rowsey. The Lexington, Virginia native scored 1,087 points in two seasons at Marquette after transferring from UNC-Asheville. His 715 points this season breaks a program record previously set by Dwyane Wade in 2003 when he led the Golden Eagles to the Final Four.

Marquette is slated to return the other eight rotational players although at least one player has transferred or left the program early in the Wojo era.

“A lot of young teams would have mailed it in,” Wojo said. “Our team didn’t.”

The Golden Eagles will add Joey Hauser, the younger brother of current sophomore Sam Hauser, and Brendan Bailey as incoming freshmen next year. Meanwhile, transfer Ed Morrow will be eligible to play next season.

“We’ll finally have more than one or two upperclassmen next year, which will be nice,” Wojo said. “We’re going to look at this year as a year where we did some things and had some experiences that will allow us to leap into the future.”