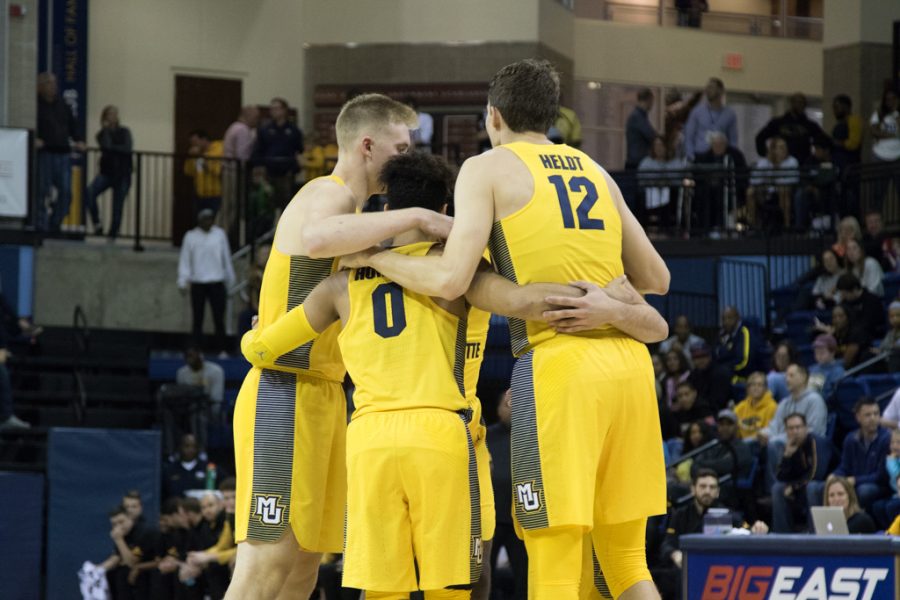 Marquette will be looking to make it to the NIT semifinals against Penn State for the first time since the 1994-'95 season when coach Mike Deane led the team to a second-place finish.

In the final home game of the 2017-’18 season, Marquette has a chance to make history against Penn State in the quarterfinals of the National Invitational Tournament. Guard Andrew Rowsey can tie Dwyane Wade’s all-time Marquette scoring record with 23 more points and fellow guard Markus Howard can do the same with 37 points.

Marquette would advance to the NIT Final Four in New York City with a victory. A loss would end the season.

Tipoff is slated for 6 p.m. on ESPN and will be played on campus at the Al McGuire Center.

PENN STATE’S TONY CARR WILL MAKE OR BREAK MU
Marquette’s recent scoring barrage in the NIT has made the Golden Eagles a formidable opponent in each of its first two games during the tournament, scoring 101 and 67 points, respectively. However, in order to find themselves back at Madison Square Garden, Nittany Lions guard Tony Carr could stand in the way of a return to Madison Square Garden.

The 6-foot-5 sophomore from Philadelphia was named first team All-Big Ten, averaged 19.5 points per game in conference and tore up Notre Dame in a 24-point, four-rebound performance.

Marquette head coach Steve Wojciechowski called Carr “as good of a young guard as there is in the United States.”

While Carr could break Marquette with his uncanny ability to get to the rim and finish, he also could have an off-night as what happened in the first game of the NIT. He shot only 1 of 12 in Penn State’s first round matchup against Temple and committed three turnovers. The Nittany Lions mounted an 11-point comeback against the Owls almost exclusively without Carr.

GOLDEN EAGLES GET CONTRIBUTIONS FROM UNLIKELY PLAYERS
Senior sharpshooter Andrew Rowsey has scored 687 points entering Tuesday’s contest, 23 points away from breaking the Marquette all-time record for points in a season set by Dwyane Wade in 2003. He’s also just six away from tying Jerel McNeal’s second-best mark set in 2009. While Rowsey has stolen the spotlight, some unexpected contributors have stepped up.

“Our freshmen have really stepped up,” Wojo said. “I think we are getting contributions from across the board, which is very positive.”

One of those areas has been on the defensive end. Through two games of the tournament, Marquette has forced 35 turnovers, 14 steals and seven blocks. The freshman trio have been a big part of that stretch with six steals and two blocks during the two-game span.

Additionally, sophomore Harry Froling is also seeing action. He played five minutes against the Ducks, an upgrade from just 14 minutes in the previous seven games combined. The Townsville, Australia native logged a rebound and a steal but was quickly subbed out after his third foul.

ATHLETIC NITTANY LIONS LOOK TO CONTROL GLASS
Penn State’s major advantage against Marquette is rebounding. In an interview with 105.7 The Fan sports radio yesterday, Wojo called Penn State “one of the most athletic teams we’ve seen.” He specifically cited guard Josh Reaves, calling him “As good of a defender on the ball throughout our season.”

Penn State’s athleticism overpowered Notre Dame as the Nittany Lions grabbed 38 rebounds against the Irish, including 14 offensive rebounds. In the comeback victory, Reeves recorded a double-double, grabbing 11 rebounds in a performance that saved the Nittany Lions’ season.

While Marquette has been more aggressive on the glass as of late, Penn State’s ability to overpower the Golden Eagles could become a factor down the stretch.
ONE LAST GAME AT THE AL
Regardless of the outcome, this will be the last home game of the season for Marquette. Wojo has frequently cited the need for a loud crowd and has had it during the NIT stretch. It was announced yesterday that Tuesday night’s game is sold out and the energy has been a big reason why Marquette has made a deep tournament run.

“The crowd has been great and we’ve fed off of it,” Wojo said.

If Marquette is to make it to Madison Square Garden, he says that it will be more than just the crowd support that will get them there.

“I don’t want it to end I really love this team,” Wojo said. “They’ve grown in so many ways and they fought through adversity, Sam Hauser’s playing on one leg; Greg Elliott’s played the whole season with a broken thumb… One of these things you want as a coach is for your guys to give everything that they’re capable of giving at this moment. This team has done it and I hope I get to coach them for a while more.”