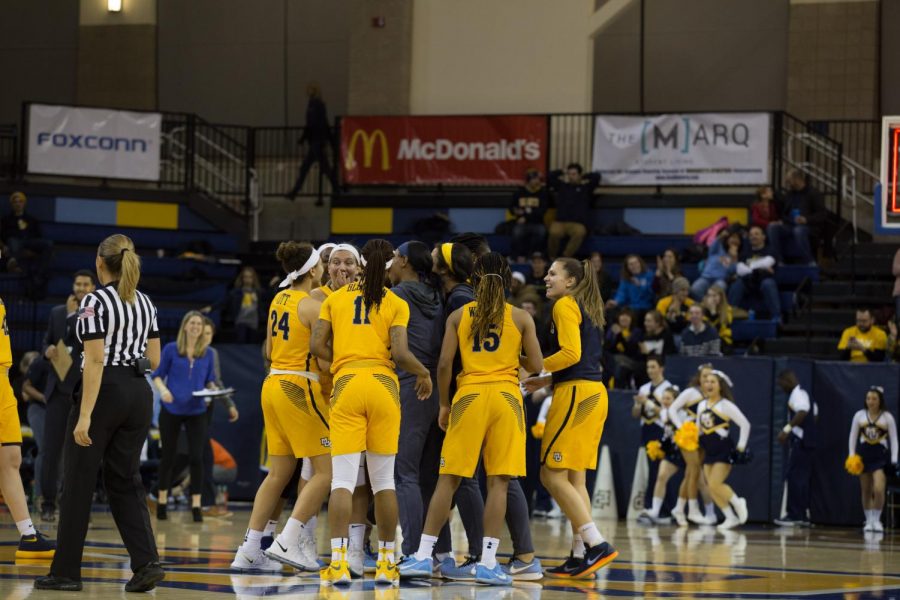 Marquette women's basketball's season ended with a 90-72 loss to Louisville in the NCAA Tournament's second round.

As Marquette’s women’s basketball took the floor at the KFC Yum! Center in Louisville, Kentucky last Sunday, the Golden Eagles were going up against a powerhouse. Louisville was the top seed in the Lexington region, had 8,047 fans in attendance and was 40 minutes away from its fifth Sweet 16 appearance in the last six seasons.

Now Marquette head coach Carolyn Kieger is trying to replicate the Cardinals’ rapid ascent in the college basketball world at her alma mater.

“(Kieger and Marquette) have a great ballclub,” Louisville head coach Jeff Walz said. “She’s done a remarkable job and has that program right back on the verge.”

Penetrating the upper echelon of women’s college basketball has proved to be nearly an impossible task. The same set of teams have dominated the women’s landscape for the last decade. The four No. 1 seeds in this year’s tournament — UConn, Louisville, Notre Dame and Mississippi State – have been perennial heavyweights for nearly all of that time period.

Kieger got a firsthand look at a blueprint for how to break into the top tier of women’s college basketball this weekend at Louisville.

“If we want to become a top-10 program or keep evolving as a women’s basketball program that gets into the top 25 annually, we’ve got to look at the best teams, and what they do, and what they do on a consistent basis,” Kieger said.

Louisville was not always a power. When Jeff Walz took over the Louisville women’s basketball program in 2007, the Cardinals were far from where they are today.

The Cardinals averaged 3,104 fans in an 18,789-seat venue in Walz’s first year. Since then, the Cardinals have been in the top five for attendance for seven consecutive seasons.

“Jeff (Walz) has done a phenomenal job with this program and where he’s taken them,” Kieger said. “I’ve watched Louisville from afar for a long time and seen the rise.”

In Kieger’s first season, Marquette averaged 1,185 fans, filling roughly a third of one of the BIG EAST’s smallest venues, the Al McGuire Center. This year, Kieger averaged a respectable 1,865 fans per home game, a considerable improvement over the last few seasons.

The Cardinals head coach was impressed with Kieger’s leadership at Marquette.

“She has a plan,” Walz said. “You can tell the kids play hard for her … When she talks to them, the eye contact they make, you can see they’re nodding their head like, ‘I’ve got you, I’ve got you.’ That’s what it’s all about.”

This leadership is not exclusive to developing her team chemistry. Kieger’s unpredictability regarding in-game adjustments makes her harder to scout against.

“She’s very good Xs and Os,” Walz said. “She comes out of a timeout, and she draws up something they haven’t run all year.”

The reconfiguration of the BIG EAST five years ago helped open the door for Marquette’s rise. Previously, UConn, Notre Dame and Louisville were essentially locks for the top three spots in the conference each year, which limited opportunities for new teams to achieve elite status.

“I’ll probably get in trouble for it, but the old BIG EAST is the best basketball league I’ve ever been a part of in women’s basketball,” Walz said. “You throw West Virginia in there, Rutgers, Marquette, DePaul, Villanova, UConn, Notre Dame — just go through the list, and it’s pretty impressive.”

Now with UConn in the American Athletic Conference and Notre Dame and Louisville in the ACC, there are more chances for members of the old BIG EAST to thrive.

“When the old BIG EAST broke up, that’s why I think everybody has had success because you’re used to playing in it,” Walz said. “It was a war night in and night out.”

Kieger said she believes the program needs to improve in two areas before being able to catapult itself into the aristocracy of college basketball: Do better against top-tier opponents and recruit bigger players.

Those problems were apparent in games against No. 2 Notre Dame and No. 11 Tennessee. Marquette flirted with a few major upsets this year, taking both opponents to overtime, but fell both times.

“You need to beat the best to be the best,” Kieger said. “We’re going to have to go through a No. 1 seed at some point (and win).”

Marquette has shown that any starter is capable of huge performances, but still lacks the consistency of a team such as No. 3 Louisville or No. 1 UConn.

Key contributors have not stepped up for Marquette in every game this season. Guards Danielle King and Natisha Hiedeman, both of whom regularly play 30-plus minutes, combined to shoot 30 percent in Marquette’s three BIG EAST Tournament games.

Kieger’s junior class is the first to bring in this culture. Highlighted by BIG EAST Player of the Year Allazia Blockton, the junior class has accounted for at least 69 percent of the team’s minutes in the last three seasons.

“Louisville has a great culture,” Blockton said. “And that’s what we’re establishing here … I’m glad that (our) class will be the first ones to start this culture.”

The class has already ushered three top-three finishes in the BIG EAST and two NCAA Tournament appearances after the program only had one in the previous nine seasons.

“You watch classes come in and go out, and their junior class is as good as anybody’s in the country,” Walz said. “They’re starting five juniors who are big-time players, and they play with a swag.”

As those juniors become seniors, Marquette will look to take the next step forward: becoming a regular mainstay in the Top 25 in 2018-’19.

“I don’t want to play them. I’ll tell you that,” Walz said. “They’re really, really good.”

But the players realize this process isn’t going to happen overnight.

“I hope in 10 years, or whenever we come back to Marquette, Marquette is like (Louisville,)” Hiedeman said. “It started with us, so just hopefully seeing that, it’ll mean a lot.”