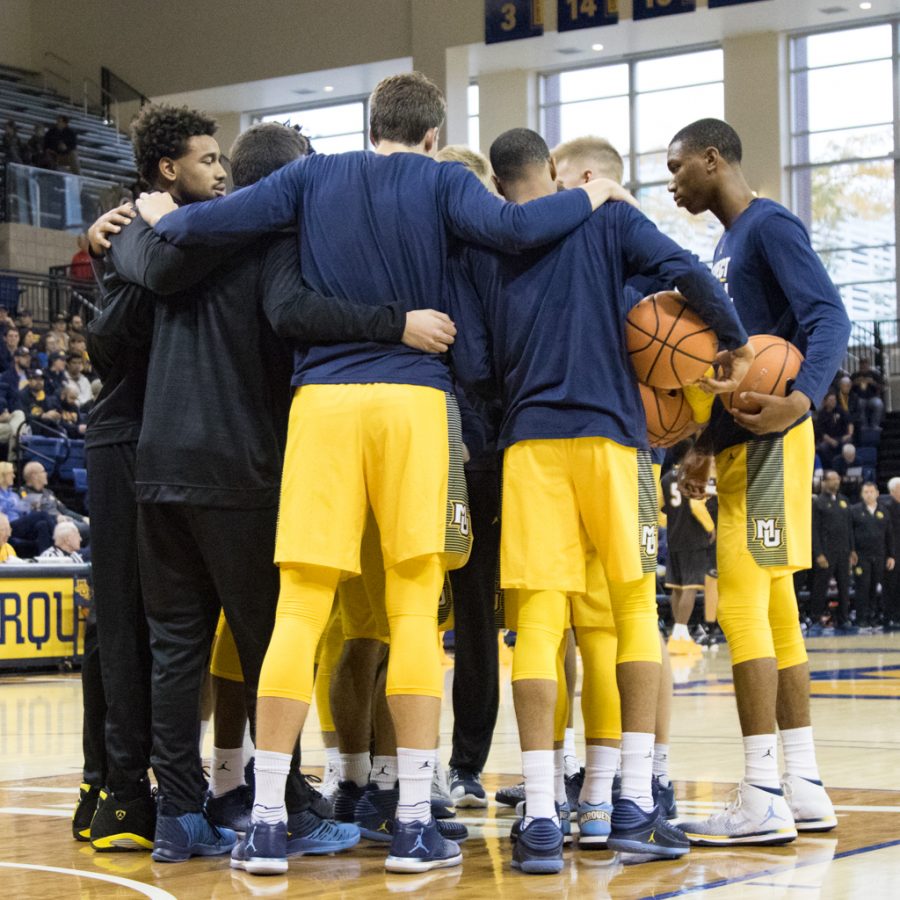 Eight of nine scholarship players that received minutes for Marquette in conference play are slated to return to next year's team.

To the average college basketball fan, it may seem like the National Invitation Tournament (NIT) is hardly worth paying attention to.

For the Marquette Golden Eagles, there’s still every reason to keep competing, according to sophomore guard Markus Howard.

“We get to practice still and compete. It’s a real motivation factor for us. That’s really important, especially now in March.”

A 94-70 walloping by Villanova in the quarterfinals of the BIG EAST Tournament one day after narrowly beating last-place DePaul revealed Marquette as a below NCAA Tournament standards. Playing in the NIT is all about bringing the team up to par.

“We put back-to-back wins together in March,” head coach Steve Wojciechowski said after Marquette’s 101-92 win over the Oregon Ducks last Sunday. “Hopefully that’s something that will get (our guys) even more excited to continue to do that.”

Most of Marquette’s players have never even had the opportunity to win in the postseason. Three of the Golden Eagles’ nine rotational players are freshmen and two are coming off redshirt seasons. The NIT is a chance for a young core to get regular playing time in win-or-go-home situations. Point guard Andrew Rowsey is the only scholarship player slated to graduate after this season.

“That’s a big part of it,” sophomore Sam Hauser said. “All of our youth gets more experience, we learn how to win in March and obviously (we) build chemistry.”

Marquette’s youth gives the team a different approach. This is not a group of upperclassmen that took one last run at March Madness and fell short. Howard said he views it instead as a step on the road to something bigger.

A lack of experience contributed to several botched opportunities that kept Marquette out of the tournament. One notable example came in the final two minutes of a loss to Xavier in December. The Golden Eagles failed to execute a three-on-one fast break that would have put them ahead. Poor open-floor decision-making, one of the hallmarks of inexperienced teams, probably cost Marquette an NCAA Tournament spot.

That fast-break attack looked noticeably better in Marquette’s victory over Oregon. Marquette outscored the Ducks 36-15 in transition and converted 13 Oregon turnovers into 30 points.

Howard said the improved productivity was all about increased awareness of his teammates, something the NIT gave Marquette more time to cultivate.

“A big part of our transition offense is advance passing,” Howard said. “When our guards look up the floor and hit our wings, our wings are so good at being able to create in transition. Just being able to do that when they turn the ball over is really important for our offense.”

While the bright lights of the NCAA Tournament are a far cry from the NIT’s more humble offerings, the tournament is anything but a series of casual scrimmages. Playing the Ducks and the Penn State Nittany Lions, two major conference programs that just missed out on March Madness, has generated excitement.

“When you see guys with ‘Oregon’ on their jerseys walking on the court, there’s an instant respect,” Wojo said. “That (program) was in the Final Four last season.”

It also helps that Marquette is able to play on a friendly floor. As the higher seed in each of their first three matchups, Marquette has hosted all three at the Al McGuire Center on campus, where a sold-out crowd awaited them for each contest.

On Sunday, the bleachers were rocking for several key moments of the Oregon win. Because of the lower ceilings and gymnasium-style enclosed setup, the crowd noise reverberated through the space much more intensely than it did in the BMO Harris Bradley Center. The 3,600 fans sounded far louder than crowds four times that size earlier this year.

“I’ll tell you what, the crowds have been awesome,” Wojo said. “Our kids have fed off the energy of the support we get. I’m so thankful for the students that are here.”

As much as the team is enjoying playing in its on-campus space, there is one larger venue that Marquette wouldn’t mind returning to: Madison Square Garden in New York City, the site of the NIT’s Final Four.

“It would be great to go back. We want to definitely wrestle some demons in New York,” Howard said. “We didn’t end the way we wanted to there.”

There’s no proven correlation between making it to the NIT’s final stages and reaching the NCAA Tournament the following year. Last year’s champion, Texas Christian University, drastically improved to a No. 6 seed in this year’s Big Dance. George Washington University won it in 2016 and took a step back in the last two seasons.

However, any talk of a March Madness bid, whether this year’s missed one or next year’s hopeful one, is the last thing on the players’ mind.

“We don’t want our season to end. We want to keep playing with each other,” Howard said.