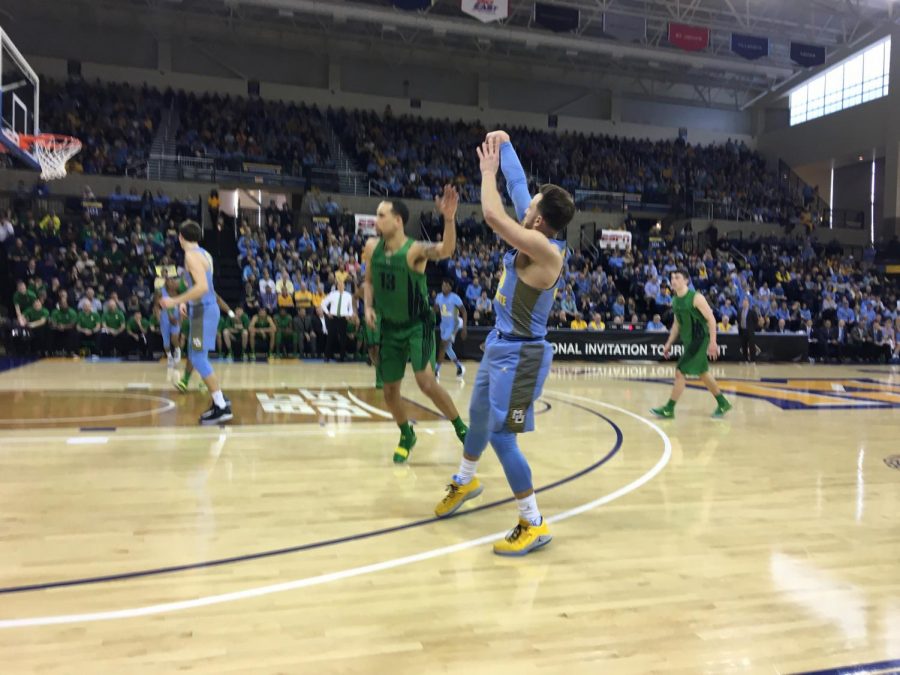 Andrew Rowsey has scored 20 or more points in 18 of Marquette's 34 games.

The Golden Eagles forced 13 turnovers and scoring 30 points off of the Ducks miscues en route to a dominant 101-92 win at the Al McGuire Center Sunday afternoon. Here are the “floor slaps” of the game:
FAST BREAK POINTS LEAD TO STELLAR FIRST HALF
Marquette forced 13 Oregon turnovers and scored 36 points off the fast break, including 24 in the first half. Oregon meanwhile scored just one point off five Marquette turnovers.

“Our activity on defense was good,” Wojo said. “We got deflections. We wanted to be in attack mode and for 32 minutes of the game, we were. That’s the mindset that we had coming into this game.”

“We wanted to make sure to get stops,” Redshirt sophomore Sacar Anim said. “I think one of the best things that we do is we get out and run. We’ve got so many shooters and to compliment that; we’ve got a lot of slashers as well like Jamal (Cain), Greg (Elliott) and I … We can finish around the rim.”

3-POINT SHOOTING BARRAGE CONTINUES IN MARCH
The Golden Eagles continued to excel from beyond the arc on Sunday, hitting 12 3-pointers. Marquette has hit 19 threes in the NIT while limiting opponents to just 11. The Ducks shot just 4 of 13 from beyond the arc.

Senior guard Andrew Rowsey scored 29 points and chipped in nine assists thanks to a hot start. He drained all six 3-pointers in the first quarter and finished the quarter with 22 points.

“We were on today,” Rowsey said. “We have days like that with the way we play and today was just one of those days. We came out, we played to our game, our style and it ended up working out well for us.”

ENERGY AT THE AL REIGNITES PLAYERS, FANS
Heading into the NIT, Marquette fans questioned whether the Al McGuire Center was the right fit to host games as opposed to the much larger BMO Harris Bradley Center.

Through two sold-out games at the Al, it’s safe to say the players have gotten energy from the smaller venue.

“I actually really like (playing at the Al),” sophomore guard Markus Howard said. “It’s really intimate. The fact that we are able to pack in a lot of people, it means a lot.”

“This is a very special place and I wish we could have played more games here this year.”

“I tell you what, the crowds have been awesome,” Wojo said. “Our kids have fed off of the energy from the crowd.”

Wojo particularly thanked the men’s lacrosse team, who created elaborate distractions during Oregon free throws from a wedding to even a rock-paper-scissors tournament. The Ducks shot 30 of 38 from the charity stripe including 15-20 in the second half when they were shooting towards the lacrosse team’s end of the court.

“The fan support has helped and lifted our team and for that, I am very appreciative,” Wojo said.
QUOTE OF THE NIGHT
“Andrew played today like a senior who didn’t want his season to be over with,” Wojo said. “That’s good because I don’t want his season to be over with, either.” -Wojo on Rowsey’s performance.
STAT OF THE NIGHT
Marquette scored 100 points for the first time since last season when they scored 102 on the road against Creighton.
UP NEXT
Marquette will need the fan support when they will host Penn State Tuesday night at the Al McGuire Center. Tipoff time has not been determined.