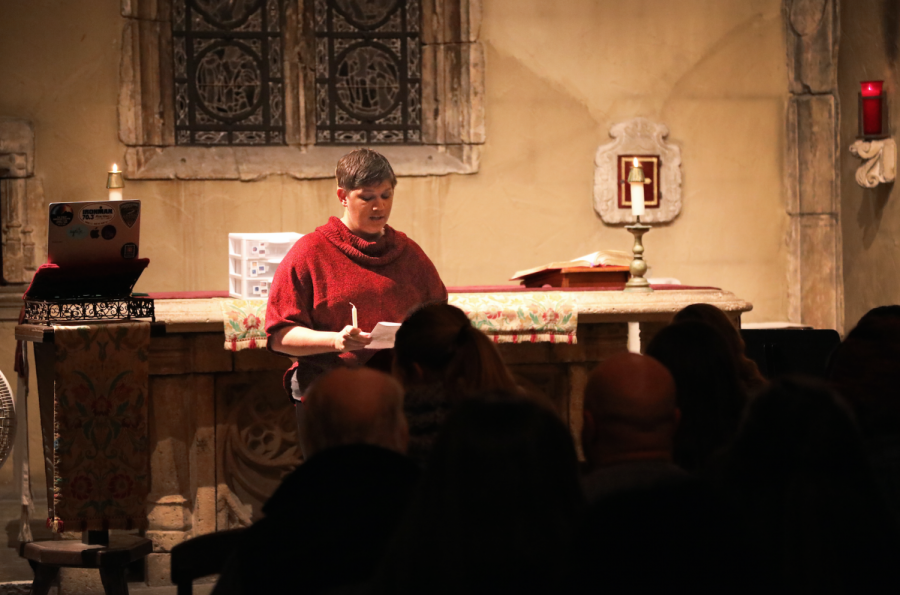 When Lutheran Campus Ministry distributed glitter ashes supporting the LGBTQ community last spring, members were hopeful it would be fully supported. It was not.

The Campus Ministry office said they received phone calls from parents and other non-university individuals.

“(LCM) was not penalized, but scolded,” Ryan Twaddle, an LCM member and third-year graduate student in the School of Dentistry, said.

Twaddle did not let Campus Ministry’s disapproval of glitter ashes stop him from advocating for LCM’s inclusive mission. He was part of LCM’s first task force meeting March 1 this year to discuss creating a separate student organization. If the organization is created, it would not be under the authority of Campus Ministry.

Mary Sue Callan-Farley, the director of Campus Ministry, said glitter ashes will not be supported by the office and “will not happen out of the Catholic tradition.”

The problem appears to be controversy over glitter ashes, but Twaddle said it can show differing views, especially regarding supporting the LGBTQ community.

Glitter ashes happened again this Ash Wednesday in the Chapel of the Holy Family, and although LCM didn’t receive any official complaints from Campus Ministry, their decade-long back-and-forth disagreements continue.

LCM’s Rev. Jessica Short said the group has struggled to build a communicative relationship with Campus Ministry. Last year, the issue manifested because the group not have a proper meeting space on campus.

LCM members have met with Campus Ministry over the past academic year to discuss their concerns.

Yana Rawinski, LCM peer minister and senior in the College of Engineering, said she feels like the meetings were an effort to silence the group. She said she met with Campus Ministry multiple times and never received a different response to her concern.

“I told the other members of LCM that I can’t mentally and emotionally deal with this situation anymore,” Rawinski said. “After over a year of trying to have conversations with Campus Ministry, I can’t continue this — every time I leave that office, I feel degraded.”

Rawinski said she understands why Campus Ministry would pushback against LCM, especially with glitter ashes.

“If a parent has an issue with something religious based, Mary Sue is probably the person that is going to receive a phone call,” Rawinski said. “So I understand where she comes from wanting to know what is going on in (LCM).”

But Twaddle said it is unreasonable for Campus Ministry to not support LCM’s backing of the LGBTQ community because it aligns with the Lutheran faith tradition.

The Evangelical Lutheran Church in America released a statement titled “A Social Statement on Human Sexuality: Gift and Trust” in 2009, declaring that human sexuality is a gift.

Twaddle said the statement created a rift in the Lutheran community but also resulted in a positive framework for addressing any controversy on sexuality and the church.

Last fall, Twaddle wrote letters of complaint about finding space on campus. This spring, he wrote a letter detailing concerns about how LCM’s pastor was negatively treated after her attempts to be inclusive of people on campus.

“I said, ‘Individuals are bullying someone on our campus, and I’m going to take a stand against it, because that’s what (Marquette) stands for,’” Twaddle said.

Twaddle said he was optimistic that Provost Daniel Myers would help construct a solution for LCM and Campus Ministry. He assumed Myers would advocate for LCM because Twaddle said he had a positive track record with other groups on campus.

“To see him stand there with a banner when everything with DACA was going down, we thought, ‘Hey, he’ll be a champion for us as well and stand up for the issues we’re seeing,” Twaddle said.

Myers said Campus Ministry does not report to the provost, and therefore, he has not been involved in any conflict resolution other than to relay concerns to others who he said can address any issues. Myers said Rev. Gerald Thomas Krettek, the vice president for the Office of Mission and Ministry, would be able to answer any questions.

Krettek said he did not receive any letters of concern from any students. He said he was aware students sent them to other individuals in the university.

Callan-Farley said she is aware of the letters. She said creating a solution is a two-way street.

“Over the years, there have always been a number of opportunities (for communication) that come up,” Callan-Farley said.

Bernardo Avila-Borunda, who works with the multi-cultural ministry, said while Campus Ministry does not support glitter ashes, there is a constant effort to try to improve ministries across campus.

Callan-Farley said she is not sure if the communication has increased over the years, but said she continues to listen to LCM’s concerns.

“We have taken these issues seriously and will continue to do so,” Callan-Farley said. “They are all our students, and we are their ministers.”

The board suggested LCM look into creating the student organization. This recommendation came from section eight: “Ecumenical and Interfaith Relationships,” writing they “recommend exploring the concurrent formation of a student group which may allow more freedom.”

At the task force meeting, LCM members decided the new student organization would be part of the national organization Reconciled in Christ. A RIC ministry actively works to confront ageism, racism, sexism and homophobia.

Short said LCM would also become RIC. She said it fits with the group’s mission, as the ministry already has an LGBTQ pride flag in its logo.

Creating a separate student organization would not mean LCM would be eliminated from the Campus Ministry’s office.

Short said she hopes the organization will branch out to individuals who may not feel comfortable approaching a church setting.

“I think in a student group, the main point is to be diverse and inclusive,” Short said. “We shouldn’t be like, ‘Oh this is for Lutherans or folks that hang out in Lutheran Campus Ministry.”

Megan Hessler, LCM Peer Minister and senior in the College of Health Sciences, said the new student organization would be able to better support the LGBTQ community on campus.

“Just get the word out to the LGBTQ+ Resource Center that we exist, and we’re here for you as spiritual guides and religious guides,” Hessler said. “We are fully in support of you guys.”

The student organization would also be able to apply for funding through MUSG, which Rawinski said would help the organization create more events and programming.

“This will solve a lot of our issues, and I feel like sometimes we’re just a burden to their office,” Rawinski said. “Can I say I’m optimistic? I don’t think so. We continuously get rejected.”

After the task force meeting, Twaddle emailed Callan-Farley to discuss the new student organization. Twaddle met with Callan-Farley, but was not willing to release any details to the Wire for fear it might interfere with any progress.

However, Rawinski continues to be hopeful the student organization will have a positive outcome for both groups. She said despite any tension, the main goal is to grow the relationship and work together.

“I think being a student org could give us more leverage to work with Campus Ministry and put on events together, which would, in my opinion, be beautiful,” Rawinski said.