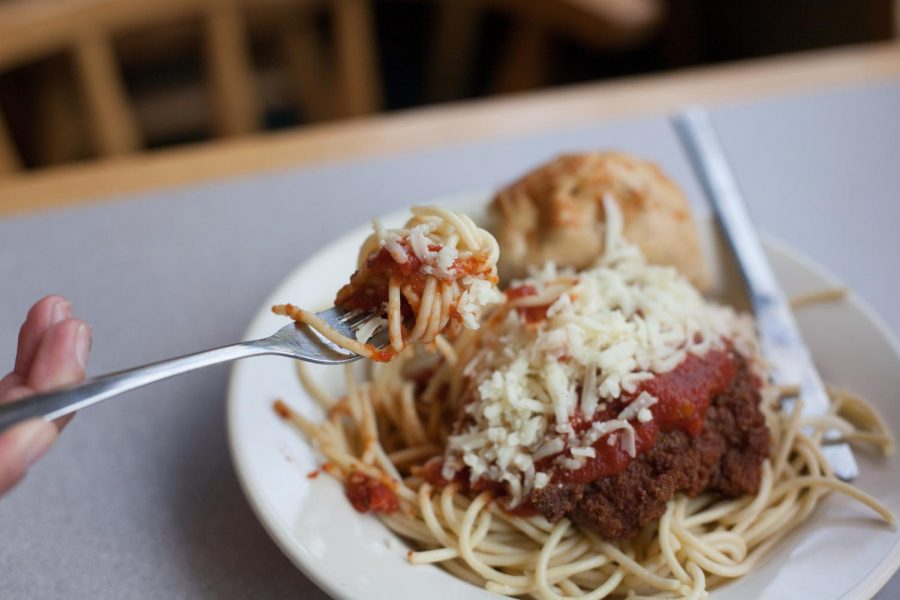 Donato Guida, the general manager of Sodexo, said all of Marquette's dining hall food is fresh.

Every food item provided to students is “100 percent fresh,” Donato Guida, the general manager of Sodexo at Marquette, said.

Sodexo gets shipments from local produce companies five days of the week, and none of it is frozen or prepackaged, Guida said. The bread used in sandwiches and burgers is baked in the campus bakery, located in Humphrey Hall.

“All of our bakery, all of our breads, all of our desserts, even the grab-and-go stuff to-go, is all made in-house,” Guida said. “The only time you will see something come out of a can is sometimes our tomato sauce.”

Every prepackaged item in the Brew is prepared in the kitchens of Schroeder Hall every morning, seven days a week, and delivered by truck to each location. Guida said every item has a 48-hour shelf life.

Rick Arcuri, executive director of business operations and auxiliary services, said Sodexo donates every leftover food item to the Marquette branch of the Campus Kitchens Project, a non-profit organization which has over 60 chapters in high schools and colleges around the nation, according to their website.

“It’s a nationwide effort where, on college campuses, students can volunteer to help prepare meals for folks who live in the community they’re in,” Arcuri said. “It’s actually based out of O’Donnell Hall. They feed over two hundred people a day.”

Sodexo’s commitment to fresh food isn’t just a preference. It’s also a part of their contract with Marquette, Arcuri said. As long as Sodexo is serving food on Marquette’s campus, everything must be fresh, from baked goods to produce. Arcuri said serving anything frozen is “not an option.”

“We are very conscious of what we serve,” Guida said. “It’s just the right thing to do. We’re restaurants.”

Brad Dawson, the executive chef of catering in the Alumni Memorial Union, has worked with Sodexo at Marquette for eight years. While his other restaurant experience has been in fine dining establishments, he said the spirit of the job is the same across platforms. He said Sodexo is like other restaurants in using only fresh food.

Dawson noted that there are benefits to only using fresh food. He said the cost is actually higher to buy prepackaged items than to directly buy fresh food, such as produce, or to make it from scratch, such as bread. He also said fresh food has a better taste and is healthier to eat.

“The restaurants where I worked at, there wasn’t a lot of prepackaged (food), we didn’t do that,” Dawson said. “We’d rather make it ourselves, for sure.”

Maranatha Ovbiagele, a senior in the College of Arts & Sciences, said she doesn’t mind if her food is frozen, but she can tell the difference between fresh and frozen produce.

“I’m not used to frozen food because I’m from Nigeria,” Ovbiagele said. “I think you’re kind of limited in the dorms.”

Maya Turner, a sophomore in the College of Education, said she is indifferent to frozen food.

“I’ve never thought about it,” Turner said. “It’s not a priority. I’ll just eat it.”

Sondra Vickstrom, a freshman in the College of Nursing, said she has faith in Sodexo’s food being fresh.

“I think it’s all pretty fresh — it’s like Subway,” Vickstrom said. “It’s definitely not restaurant-style food, but I like the food here.”