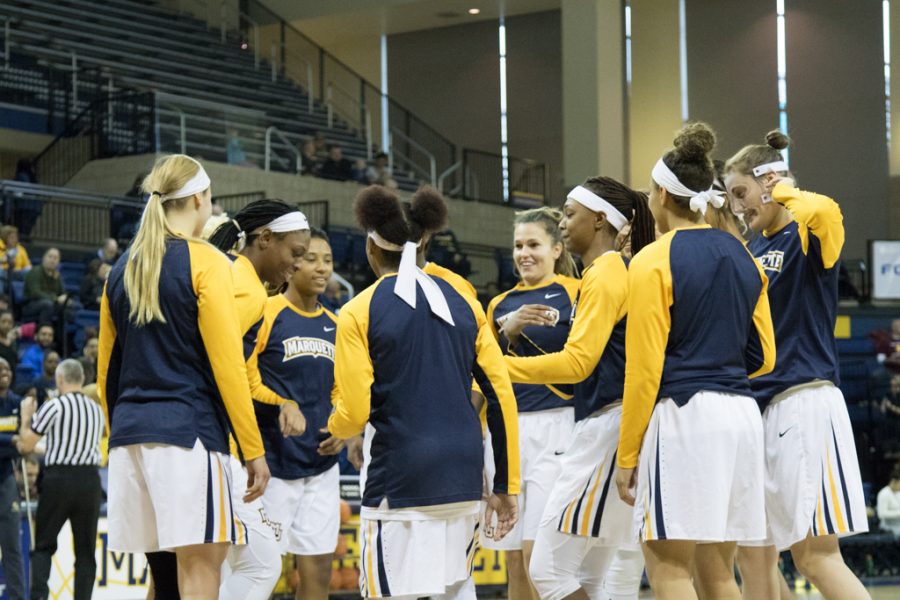 After blowing out Dayton 84-65 Friday afternoon in Marquette’s first NCAA Tournament win since 2011, women’s basketball head coach Carolyn Kieger couldn’t help but reflect on how far her team had come.

“What a difference a year can make,” Kieger said.

A year ago, Marquette was heartbroken following an upset at the hands of 12th-seeded Quinnipiac. The Golden Eagles won its first BIG EAST Tournament and had the highest seed in program history, but it didn’t matter.

“I still remember the locker room feeling at the end of the Quinnipiac game,” Kieger said. “(Our players) were really disappointed last year.”

“We knew we could do better,” junior guard Amani Wilborn said.

Fast forward to the 2018 NCAA Tournament and the Golden Eagles are exactly what they weren’t a year ago. As a tired Dayton team struggled to keep up with the 151 combined possessions, Marquette’s experienced offense flowed seamlessly.

“(Last year) was our first time being in the tournament, whether we admit it or not,” junior point guard Danielle King said. “We were ready to redeem ourselves and our name this time in the tournament.”

The Flyers had an 11-3 lead halfway through the first quarter, holding Marquette scoreless on 10 of its first 11 possessions. Last year’s team got in a similar early hole against Quinnipiac and stayed there.

But not this year.

Instead, Marquette found its composure during a timeout, regrouped and went on a 19-0 run to permanently seize the lead.

“Our team did a phenomenal job of weathering the storm and staying tough and battling through adversity,” Kieger said. “Which is something that we’ve talked a lot about since the DePaul game.”

Last year, Marquette was one defensive-minded player short of competing against top-tier teams. That all changed with the addition of 5-foot-11 freshman Selena Lott, whom Kieger has described as one of the best defenders in the country and a go-to player off the bench.

“(The depth) was great because we knew we could keep the foot on the gas,” Wilborn said. “When (Dayton) ran out of gas, we started going harder.”

Lott’s efforts are in support of Marquette’s juggernaut junior class, which have grown up considerably since last year. All five players on the floor to start the Dayton game came into the program in 2015-’16. Kieger calls her core backcourt of Wilborn, Natisha Hiedeman, Danielle King, and Allazia Blockton the team’s “four point guards.”

“That means everybody is smart enough to make a high IQ play,” King said. “We can get it and go, and anybody can start our offense.”

In previous years, Marquette’s success was heavily predicated on Blockton, who has led the team in scoring for all three seasons of her college career and was the fastest player in program history to 1,000 points. Now when Blockton’s shot isn’t falling, Kieger doesn’t need to be concerned.

“Any given night, we could have four or five players go off for 20 points,” Kieger said. “So it’s fun to win in March.”

That was precisely the case Friday against Dayton. The BIG EAST Player of the Year started out 1 for 8 from the field, but Hiedeman stepped up instead, scoring the team’s first 15 points.

“Some nights it’s not going to go in,” Blockton said. “(Hiedeman) was hot. When she’s shooting like that, I don’t really need the ball anyway.”

This has been a work in progress for the 363 days since last year’s upset in Miami, which wasn’t the only heartbreaker in that span. This season, Marquette took No. 2 Notre Dame and No. 12 Tennessee into overtime in its non-conference slate, barely falling to both teams.

“We’ve been waiting for this moment the entire year,” Kieger said. “This is a reflection of how hard we’ve worked in the last year.”

Marquette is beginning to reap the rewards of all that hard work and all that heartbreak. Two years after being picked to finish second-to-last in the BIG EAST, Marquette has a chance at knocking off No. 1-seed Louisville at the Cardinals’ home venue to advance to the NCAA Tournament’s Sweet 16.

“Last year, we won the BIG EAST and lost our first-round game,” Kieger said prior to the Dayton game. “This year we’re planning on doing the opposite.”

What a difference a year can make, indeed.