Women’s lacrosse falls to No. 9 Northwestern on the road 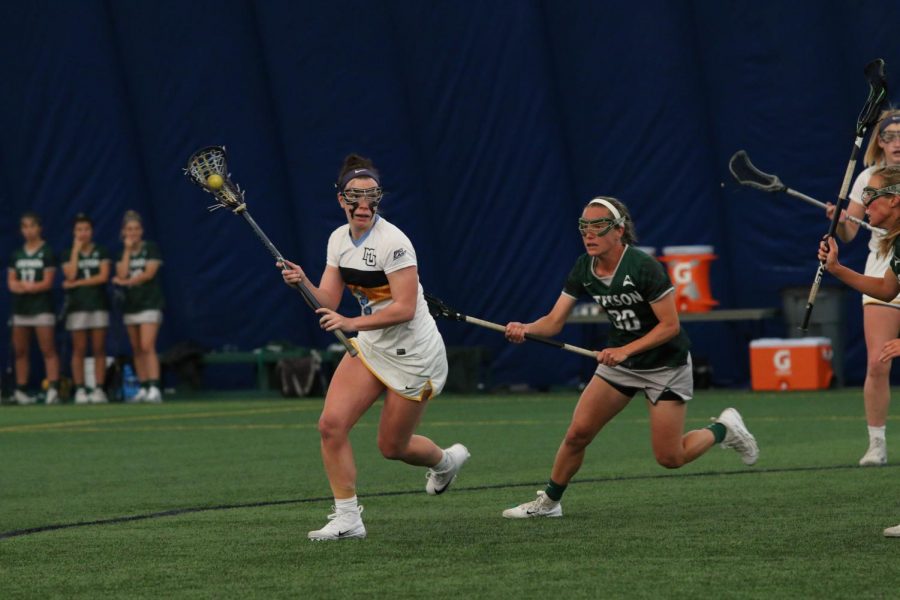 Marquette women’s lacrosse (4-4) have made program history by finishing .500 in non-conference play for the first time, but the final game in that span offered reason for concern.

The No. 9 Northwestern Wildcats (5-2) ran roughshod over Marquette, scoring seven straight goals in the first half to pull away to a 20-9 win. Marquette head coach Meredith Black thought Northwestern’s early run deflated her team.

“We’ve got to figure out how to play for the full 60 (minutes) and just be OK with the other team going on a run here or there,” Black said. “When they do go on a run, we’ve got to find a way to dig in and make a stop.

Northwestern got on the board first with goals from sophomore midfielder’s Lindsey McKone and Megan Kinna, but the Golden Eagles countered with goals from junior Grace Gabriel and senior Allison Lane to tie the game at two. Lane and Gabriel become the sixth and seventh Marquette players to tally at least 100 career points by game’s end.

The Wildcats broke the tie with that 7-0 run. Five different Northwestern players scored goals in the run, which took just under nine minutes of the first half.

Senior attacker Charlotte McGuire struck back, initiating a 3-0 for Marquette with back-to-back goals. Gabriel followed it up by scoring off a free position shot 9-5.

Maybe that run would have sparked a larger Golden Eagle comeback if the Wildcats didn’t dominate the draw control circle so thoroughly. The Cats won 20 of 29 draws over the course of the game and 13 of 19 in the first half.

Northwestern led 13-6 at the half and that lead would only expand with a quick 3-0 run. McGuire and Gabriel answered back each with a goal apiece – both players’ third goals of the day – to make the score 16-8. After those goals, Northwestern pulled starting goalie Julie Krupnick from the game and put in junior Mallory Weisse, who finished the game to seal the Wildcats’ victory.

The Golden Eagles will return to Valley Fields Sunday at noon, where they’ll open BIG EAST play against Cincinnati Bearcats.

“(We’re) getting excited for our conference season,” Black said. “We’re believing in ourselves and what we’re capable of.”