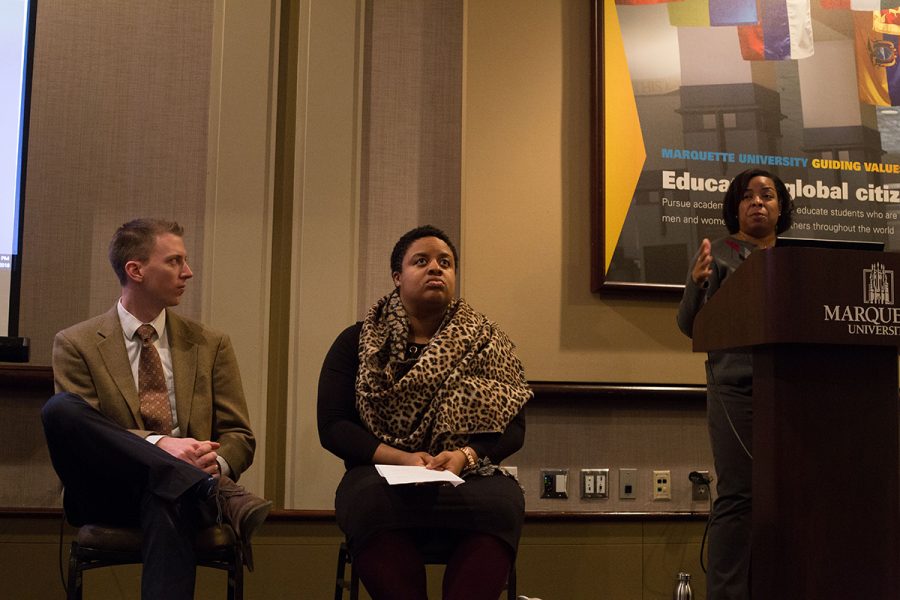 Conor Kelly, an assistant professor of theology, and Monique Liston, an adjunct instructor of Gender and Sexualities Studies participate in a panel discussion.

The Center for Gender and Sexualities Studies and Campus Ministry hosted a panel that addressed complexities of human life, personhood and abortion. The discussion took place at the Alumni Memorial Union March 6.

Empowerment and Marquette for Life were invited to be co-sponsors. The groups began meeting earlier this year in hopes to resolve conflict between them over Marquette for Life’s “Memorial to the Unborn” display during Pro-Life Week.

Members aimed to reach a compromise regarding the memorial and to collaborate on a discussion-based event. This desire to open a dialogue prompted the “When does human life begin?” event planning.

The event’s faculty panelists — Conor Kelly from the theology department and Monique Liston from the Center for Gender and Sexualities Studies — provided two viewpoints on the issue at hand.

Marquette for Life said the organization does not support some of the claims made at the panel.

Because the Catholic Church is unable to pinpoint the exact moment personhood begins, Kelly said the church has developed an assumption that human life begins at the moment of conception. He said this is to protect all potential human life.

“In theology, there’s an ongoing conversation about how to identify exactly when personhood begins as a better way of describing not just life in the biological sense, but life in the moral sense,” Kelly said. “The Catholic Church says it doesn’t know when life begins in the sense of personhood.”

“This is a belief which Marquette for Life, as well as the Catholic Church uphold unapologetically,” the statement said. “There is no debate on the biological factors of this, and furthermore no debate about when the soul joins the body, contrary to claims conveyed (at the panel).”

She said individuals should recognize the community contexts that contribute to individuals’ views on this topic. Members of the Marquette community are privileged to be given the opportunity to attend a panel like this, she said.

“When we kind of see that reality, it very much complicates this picture and puts a lot of the onus, I would say, on our society to rethink what we’re doing and how we can be supportive, even if we want to affirm the autonomy of people to make choices,” Kelly said.

The Catholic Church believes that two persons must be considered during a pregnancy, which means respecting both the mother and unborn child, Kelly said.

“That means thinking about social structures in place that allow women to say, ‘Yeah, I would like to have this child. I would like to bring this child to term. And you know what, I don’t have a lot of resources to do that,’” he said.

Kelly and Liston agreed that more resources — such as universal healthcare — must be provided to women if pro-life movements are to gain momentum in the United States.

Marquette for Life disavowed this claim as well.

“We believe that women’s healthcare needs both before, during, and after pregnancy can be adequately met without socialized medicine,” organization leaders wrote in a statement.

After the speech, some students expressed shock at the cordial nature of the dialogue between the panelists.

“What I took away from (the panel) is just how pro-choice and pro-life views can dialogue in a more peaceful manner,” Yvonne Danko, a sophomore in the College of Nursing, said. “In social media and other outlets, you don’t really see that at all. I was just very shocked at the kind of understanding between them both.”

Zac Wierschem, a senior in the College of Business Administration, said the ability of the speakers to address the root of the issue showed their awareness of the topic.

“Issues like this are highly partisan, highly politicized. I was worried about this panel becoming something like that, specifically from the question and answer aspect of it,” he said. “That kind of was the case, but the eloquence that the speakers had in answering questions (was impressive).”

Maria Bunczak, a sophomore in the College of Nursing and Empowerment social media manager, said she wishes the panelists further discussed how to resolve the issues at hand.

“The professor who was talking brought up the fact that our government is not working, which I completely agree with, but how do we make it work? How do we reach that idealized form of government? What do we do with the government we have now? It was frustrating that that part was not addressed,” she said.

However, she said she was happy with the turnout of the event and hopes to sponsor similar events in the future.

“I feel the faculty in the discussion conducted themselves very professionally, and both brought up great points,” she said. “I think we will do something like this again in the future as it went so well, and I have high hopes for discussion between Empowerment and Marquette for Life moving forward.”