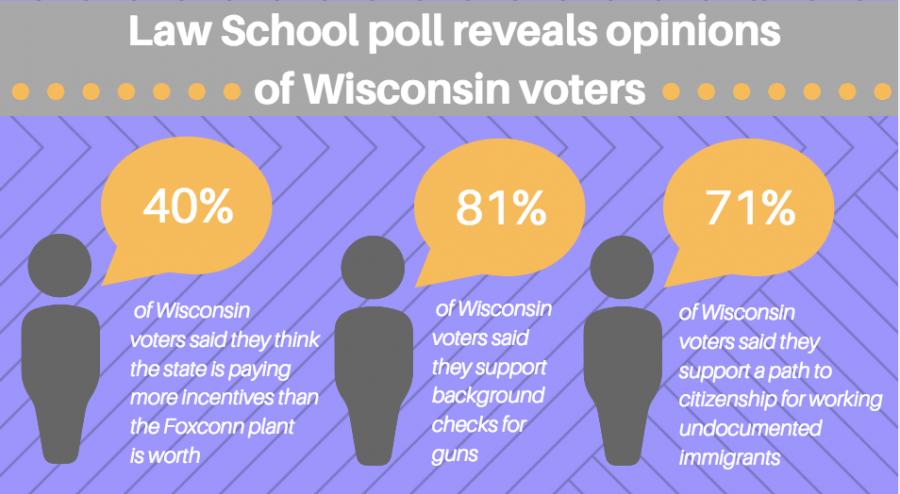 Forty percent of voters said they think Wisconsin is paying more incentives than the Foxconn plant is worth, and 39 percent said they think the plant will provide at least as much value as the state’s investment.

Residents in the City of Milwaukee are more likely than the rest of the area’s residents to think the plant is not worth the state’s subsidy. They also answered negatively when asked if Foxconn will improve Milwaukee economically. The $10 billion manufacturing plant is set to operate by 2019.

Voters expressed a 43 percent approval rating of President Donald Trump, a 2 percentage-point increase since the Law School’s poll in June 2017. Eighty-nine percent of Republicans said they approve of Trump and 89 percent of Democrats said they disapprove of him.

About half of Wisconsin voters said they think Trump is keeping his campaign promises.

However, the governor had a slightly higher approval rating. Wisconsin voters are evenly split between a favorable and unfavorable view of Governor Scott Walker. This changed from a year ago, when more Wisconsin voters viewed Walker unfavorably than favorably by a small margin.

With incoming senate elections near, incumbent senator Tammy Baldwin received a 39 percent unfavorable rating, with a 37 percent favorable rating. A year ago, more voters viewed Baldwin favorably than unfavorably by a small margin.

These levels of enthusiasm are up from the last midterm election four years ago for Democrats, when 52 percent said they were very enthusiastic. Republican enthusiasm has decreased by 1 percent from four years ago.

The poll also addressed the topic of immigration.

Wisconsin voters also weighed in on Trump’s proposal for a wall on the U.S.-Mexico border. Most voters — 59 percent — said they oppose building a wall along the entire border.

The majority of Wisconsin voters expressed that they are very or somewhat concerned about Russian attempts to influence the last presidential election. About a quarter of respondents said they are not at all concerned.

The poll, conducted Feb. 25 through March 1, reached 800 registered Wisconsin voters. The voters were surveyed by telephone. The margin of error is +/- 4.5 percentage points.