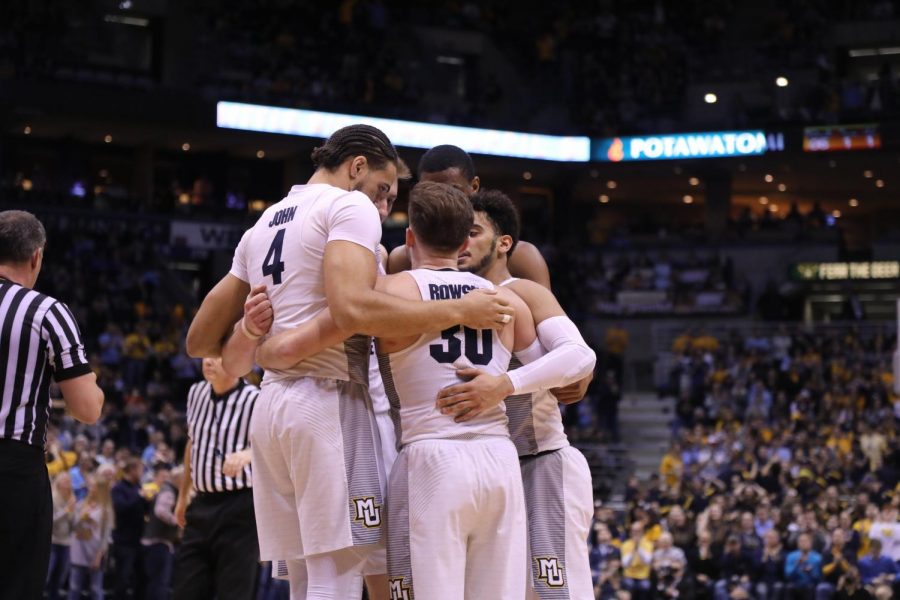 Marquette defeated Creighton in the final game at the BMO Harris Bradley Center.

In senior guard Andrew Rowsey’s final game at the BMO Harris Bradley Center, he demonstrated why he’s one of college basketball’s most exciting players to watch, scoring 26 points in a dramatic 85-81 victory over Creighton Saturday afternoon. However, for all the excitement that Rowsey gave the Bradley Center crowd, it certainly wasn’t the only important thing to happen.

LACK OF RHYTHM CONTROL NOT AN ISSUE FOR MU
Creighton controlled the tempo for large portions of the game, outscoring Marquette 25-12 on fast break points. Creighton also outscored Marquette in the paint, 40-12.

Sophomore guard Markus Howard, who finished with 25 points on 8-of-15 shooting and 5-of-8 from beyond the arc, believed that Marquette was able to turn a 14-point deficit around thanks to its defense.

“I thought we were competing,” Howard said. “I think the thing we lacked the most of in the first half was our competitive edge. Coach (Steve Wojciechowski) had some choice words for us at halftime that really got us fired up. Once he said that, with us knowing that it was Andrew’s last half of basketball, we wanted to come out and lay it on the floor.”

Bluejays head coach Greg McDermott thought that Creighton was not able to get as many clean looks in the second half as they did in the first half.

“I thought at times we settled for 15 to 17-footers that were open, but I am not sure that anybody stopped us from going to the rim. Maybe we settled a little bit for a 15-footer that we did not make, and we could have maybe got to the rim and got to the free throw line.”

KHYRI THOMAS SHUT DOWN IN SECOND HALF
One of Marquette’s biggest problems in the first half was stopping junior guard Khyri Thomas, who went into the locker room with 19 points on 8-of-10 shooting and 3-0f-4 shooting from beyond the arc.

However, it was a different story in the second half. Marquette’s defense locked Thomas up, only allowing him to score five more points the entire game. While Thomas grabbed five rebounds, he also picked up four personal fouls and turned the ball over twice.

“They got to him on the catch and some of the 3-point shots,” Creighton head coach Greg McDermott said. “Khyri got to the rim. There was some contact sometimes, and we weren’t able to get to the free throw line like we did in the first half, but we did not make them.”

“Khyri had a good game,” McDermott continued. “He played well defensively and obviously, had a big first half.”

“We knew we had to limit Thomas,” Rowsey said. “We knew that was going to be difficult but we made that change at halftime. We came back out with a little bit of an edge, we came out with a little bit more of a defensive mindset and it just played our way.”
FIN
It was a movie-script ending for both Rowsey and the BMO Harris Bradley Center in Marquette’s 502nd home game since moving to the arena in 1988-’89. The team will play its games in the new Wisconsin Sports and Entertainment Center next season.

“The Bradley Center has been an amazing home for Marquette basketball for so long,” Wojo said. “The games that have been played in here have created memories for families, fans, the entire Marquette community, that people will go to their grave with.”

The Golden Eagles never had a losing season at home, winning over 75 percent of their games in the BMO. Marquette has ranked in the top 25 in attendance for the last 16 years.
UP NEXT
Marquette will travel to New York City, where they will play  DePaul in the first round of the BIG EAST Tournament. The teams squared off last on Feb. 24, when the Blue Demons out-rebounded Marquette 49-30 in a 70-62 victory over the Golden Eagles at Wintrust Arena in Chicago.
STAT OF THE NIGHT
Marquette is 6-0 when Andrew Rowsey has eight assists or more.

QUOTE OF THE NIGHT
“The games that have been played in here have created memories for families, fans, the entire Marquette community, that people will go to their grave with.” — Wojo on playing at the Bradley Center.