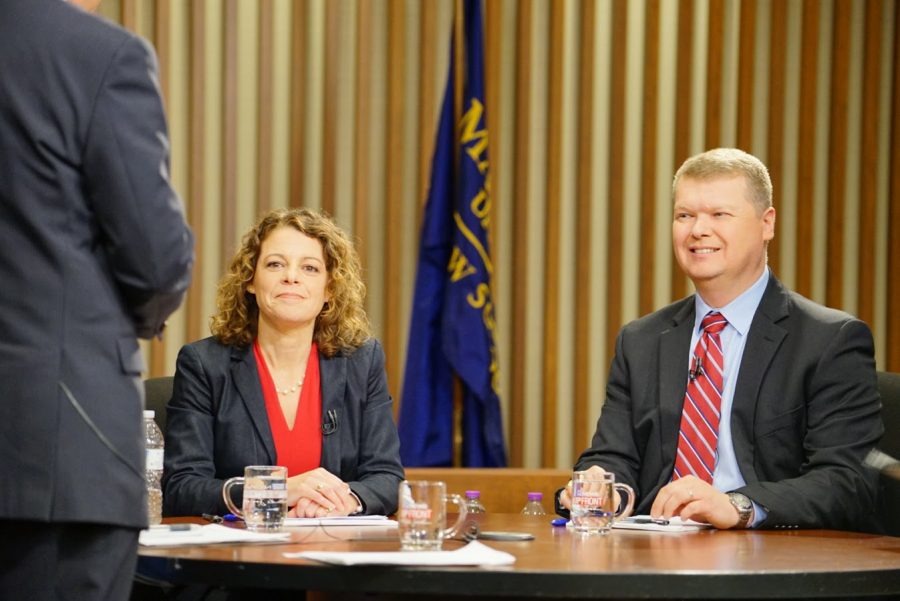 The election for the Wisconsin Supreme Court justice will occur Tuesday, April 3. The elected justice will serve a 10-year term.

Gousha began the debate between Screnock and Dallet by stating the rules.

“This is a conversation. We will be talking to the candidates about their qualifications, how they do the job, and about some of the key term issues that have emerged in this campaign,” he said.

Dallet, who has been within Wisconsin’s courtrooms for more than 20 years, had the opening remarks.

“We’re in a moment of time right now where our rights are under attack,” she said.

Dallet said the courtroom is broken. Rights regarding clean air and water, protection under the law and women’s rights were included in her opening statement. In the primary, Dallet was mostly supported by Democrats.

“What we need is someone with experience and values to stand up and repair that court,” Dallet said.

Supported mainly by Republicans in the primary, Screnock said he has experience court has not seen before. He said his work in both the private and public sectors sets him apart from his running-mates.

“The work that I did on those (previous) cases mirrors exactly what a supreme court justice does,” he said.

Screnock said he strongly believes in the rule of law, and finding all answers within it.

“I believe it’s critically important that the next justice of our Supreme Court actually does just follow the law, abides the laws they confide in and not as what they wish it to be,” he said.

Screnock said our constitution must be interpreted as it was originally intended when it was either adopted or amended.

“The reason I believe that so strongly is because to do anything else other than our constitution actually has the effect of the Supreme Court amending the constitution on the fly, case-by-case basis,” he said.

Screnock said the Supreme Court should not be based on justices’ suspicions of what the legislature meant to say with words, but didn’t.

Screnock said he does not believe Dallet follows the rule of law. Dallet said Screnock mischaracterized her.

“I’m the only candidate who knows what it’s like to follow the rule of law everyday for almost a decade,” Dallet said.

Screnock said the rule of law means following the rules where they fit into his political views of the world.

“He has shown in his past that he doesn’t follow the rule of law,” Dallet said. “I’m the only one who knows what rule of law means.”

The debate moved toward discussion of endorsements, interest money in both of the campaigns and self-imposing rules the candidates set on themselves throughout their campaigns.

Abortion, birth control and activism were briefly discussed. However, one of the biggest debates of the night was Screnock’s recent endorsement from the National Rifle Association.

Screnock expressed his sympathy for the victims of Florida school shooting, and said he is pleased to be supported by the NRA.

“I made one promise to the NRA that I have made to every voter across the state, and that is I am committed to upholding the rule of law, respecting the constitution, respecting the separation of powers and setting aside my personal beliefs,” he said.

Screnock said the reason the NRA supports him is because his originalist vision aligns with its desires.

“They want justices on our Supreme Court that will simply follow the rule of law, and interpret the constitution as it was originally intended,” he said.

Dallet said she believes this endorsement could affect Screnock‘s decisions on the court.

“Wisconsin voters should expect from their justices and judges that we are not going to take positions on issues that are going to come in front of the court potentially,” Dallet said.

Following the debate, both candidates reflected on what was said.

“She intends to be an activist and she apparently has a difficult time on the stand.  I can set aside my personal beliefs and simply abide the law,” Screnock said.

Dallet said she trusts voters to make the right choice.

“I think the voters will see the clear choice that they have between the candidates who can bring independence and fairness to our Supreme Court,” she said.