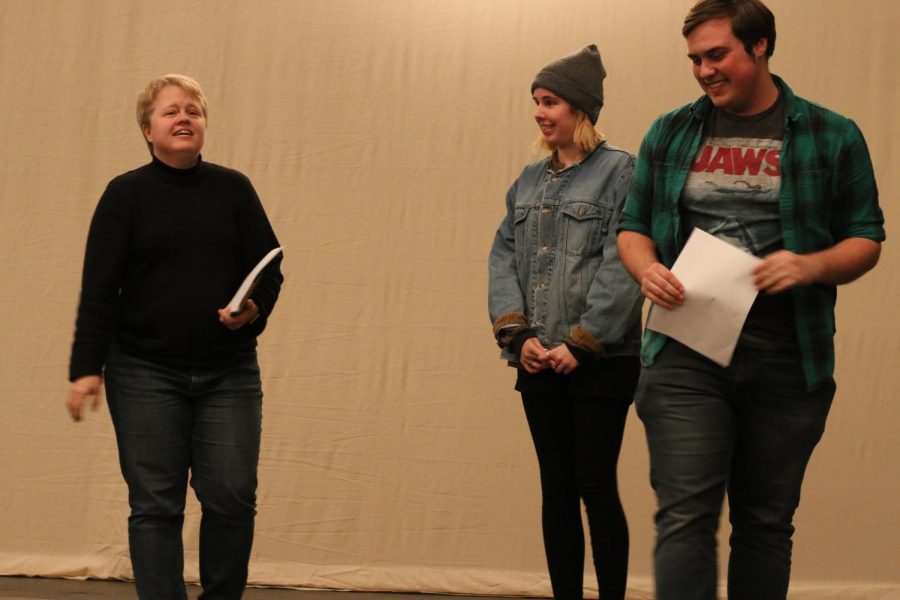 Twelve films were shown at the eighth annual Student Film Festival Monday night, but only one could win first place.

Alex Langosch, a senior in the College of Communication and Marquette Wire staff member, won Best Picture with his film “Cross My Heart.” The 7-minute film depicts a young woman betraying her boss, who runs a black-market organized crime group. Langosch wrote and directed the piece.

In second place was “Fallen for Ya,” created by College of Communication sophomore Nick Volkers and junior Neve Moos. In third was “Death of a Scriptwriter,” created by Paula Tews, Nora Richie, Maggie O’Keefe and Dean Cramer, who all graduated last spring. Tews and O’Keefe are former Marquette Wire staff members.

All three films’ creators won vouchers to submit their work to professional film festivals such as the Milwaukee Film Festival. First place received $150, second was awarded $100 and the third $50. Many festivals have free or reduced submission rates for students, while others can range from $15 to $50, festival organizer Kris Holodak said.

The films were critiqued by a panel of seven judges with professional film experience. Three were alumni, including Lauren Bradley (Class of 2012), Chris Visser (Class of 2012) and Emily Foster (Class of 2013). The panel used criteria to evaluate writing, production, cinematography, sound design and editing.

Joe Brown, an assistant professor of digital media and performing arts, also helped organize the festival and said he was a sideline “cheerleader” for Holodak. The pair are faculty advisors for the Film Club. He said he wants to emphasize how important it is for students to share their work with potential employers and collaborators.

“What’s rewarding and challenging about working with the festival is the process of trying to get students involved,” Brown said. “It’s really important for students to understand that they need to find an audience for their film. Even if the film’s not perfect, they have to get used to putting their work out there.”

Langosch said he originally wrote the film’s premise during a Marquette men’s basketball game. He said he wanted to tell a story without showing faces and instead focus on the power of body language. The film does not reveal anyone’s face until the very end and uses images of people’s feet and hands to convey emotion.

“I did ‘Cross My Heart’ because I wanted to tell a story in an unconventional way,” Langosch said. “I was really proud of the final product. I think it turned out really well. (The fact that) people in the industry saw it was really cool.”

Langosch said he considers filmmaking a hobby. His goal is to create one short film per semester, and eventually make a career out of it.

“I’m just happy that I won,” Langosch said. “I think all the other films were really good, too. It’s just nice to be recognized for that.”

“Creativity has a way of snowballing,” Brown said. “At first, the snowball is kind of small, but as it keeps rolling, it gets bigger and bigger. And I think that we’re doing a lot … to elevate the arts.”