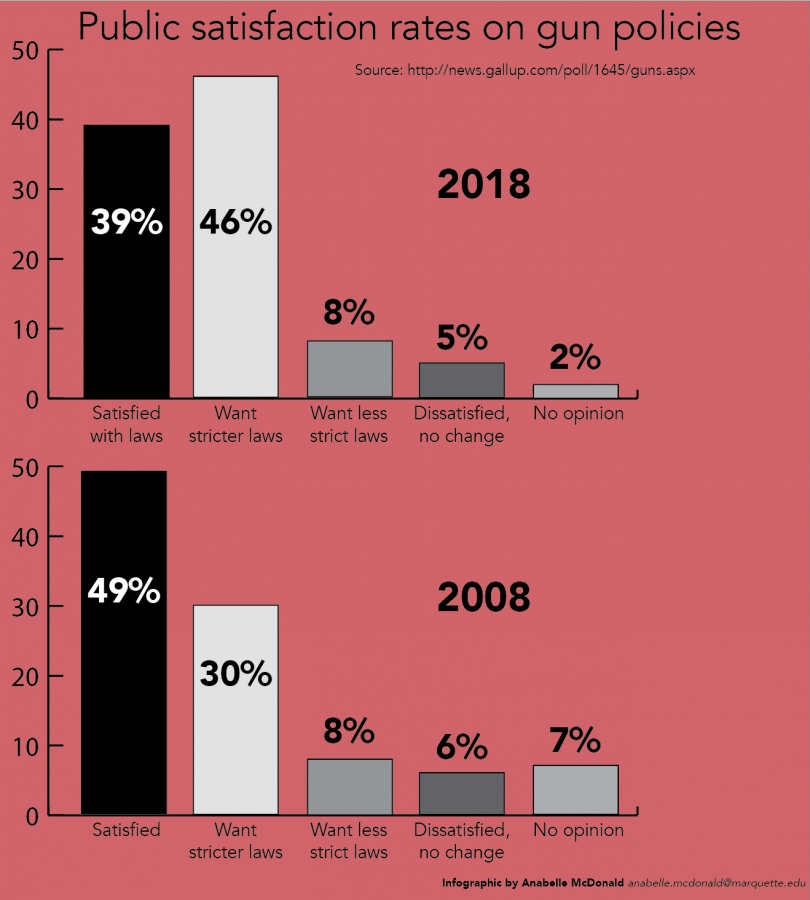 The Marquette Wire Editorial Board rarely comments on issues of national attention unless they have a tangible connection to the university. We try to pick topics that directly impact Marquette students and leave the national political analysis to The New York Times.

But we feel to be complicit in the conversation for national gun reform would be inappropriate and irresponsible. The personal is political. Students should not be afraid to go to school. Current gun regulations inadequately address this public safety issue, putting an untold number of lives at risk.

While this issue is of national importance, the threat of gun violence is also a private fear. We’re not alone in that, either. In December, nearly a third of CBS News poll respondents said they were less likely to attend large public events in light of recent mass shootings.

This also applies to public spaces such as a classroom on a college campus.

And when the conversation devolves into criticisms of sanctimonious liberals or obstinate conservatives, it becomes less important. There is no place for partisanship next to the viscera and loss that accompany these shootings.

We feel this personally. We have siblings who board school buses every morning, we have relatives in law enforcement and education and we see ourselves in the faces of the dead.

Our lives have been spent within the confines of school buildings, learning how to stay low and avoid windows, huddling together in small corners of dark classrooms during active shooter drills, hearing testimony from our counterparts who had lived through the reality.

The 2007 Virginia Tech shooting in Blacksburg, Virginia, was among the first mass-shootings we remember. It lasted two hours and left 33 people, including the shooter, dead. Cable news ran videos of students crying in fear and police officers walking the halls in the aftermath, explaining how it all happened.

The debate on gun control has finally begun to evolve in the aftermath of the Stoneman Douglas High School shooting in Florida earlier this month. Republican lawmakers are proposing uncharacteristic gun reform measures — like raising the minimum age to purchase a firearm — and corporations are enforcing their influence by cutting ties to the NRA.

But while we need reform, the attention cannot be on mentally ill teenagers and school security alone. The Virginia Tech shooter, Seung-Hui Cho, was 23 years old and attended college, not high school. The Las Vegas shooter, Stephen Paddock, was 64 years old.

Moreover, schools are not the only places these shootings occur. Movie theaters, military bases, mosques and public sidewalks have all been targets in these attacks.

There are realistic gun reform measures that could be implemented without inciting gun owners. Creating a federal gun registry, enforcing maximum ammunitions purchases and magazine capacities, and mandating a waiting period for firearm purchases wouldn’t disadvantage responsible current gun owners, and would be a small price to pay for a sense of security.

While there are realistic policies being presented, POTUS’ call to arm teachers is not among them, nor is allowing concealed carry on campuses.

The NRA and its supporters contend “the only way to stop a bad guy with a gun is with a good guy with a gun,” but guns are rarely ever used in self-defense. Victims of violent crimes used a firearm for self-defense in 1.1 percent of incidents between 2013-’15, according to the Violence Policy Center. That a gunman was able to kill 13 people at Fort Hood in 2009 also seems to discredit the theory that more guns mean increased security.

It also seems to be asking a lot of educators to be willing to risk their lives against a would-be shooter, and a spokesperson for the National Education Association told NPR that parents and teachers rejected the proposal.

More guns in schools will only increase the potential for campus shootings, the same way more guns anywhere increases the chances that somebody will be be shot.

Support for gun control is increasing, with upwards of 90 percent of Americans in favor of universal background checks, but the only way to begin to change the culture around guns is through policy. We’re not so much afraid of guns as we are afraid of lackluster, permissive or nonexistent laws that all but ensure mass shootings will continue to occur.