Women’s lacrosse remains undefeated at home with win over Stetson 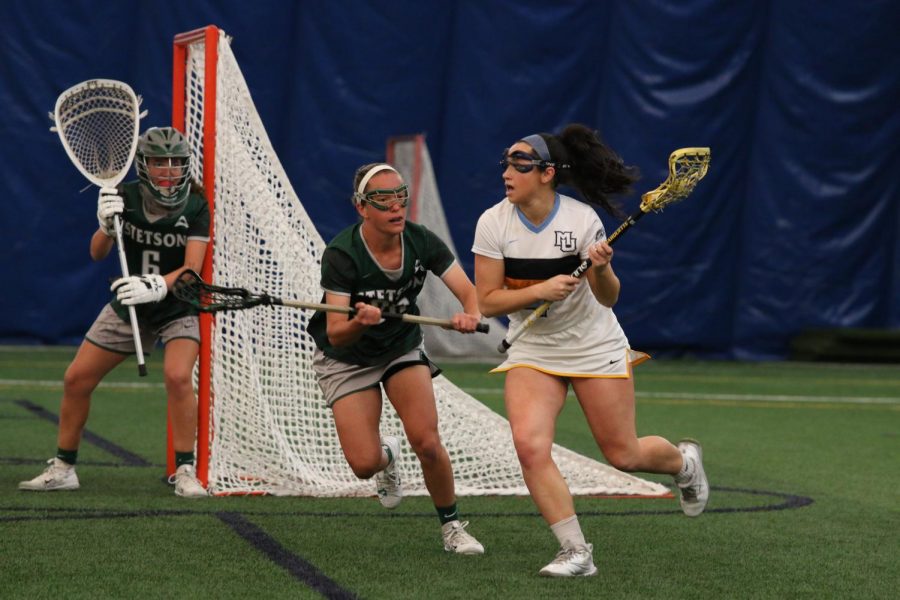 Marquette (3-2) closed out a three-game homestand Sunday with a convincing 22-12 win over the Stetson Hatters (0-3).

After back-to-back wins over Central Michigan and Kennesaw State last weekend, the Golden Eagles’ heightened confidence helped the team dominate from the first draw. Senior midfielder Allison Lane led a 7-1 run alongside Grace Gabriel and Megan Menzuber in the first 10 minutes of play. Stetson, finally answered back with a free position goal from Taylor Petrizi to make it 7-2.

Senior attacker Riley Hill then initiated a 5-0 run, which also included goals from Gabriel and Charlotte McGuire. Hill scored a hat trick during that run, making her the fourth player in program history to record 100 career points.

The Hatters thwarted the Golden Eagles’ 5-0 run four goals, forcing a Marquette timeout. However, Marquette dominated the remainder of the first half, finishing the half with a 15-7 lead.

Marquette added to its lead with a 5-0 run at the start of the second half with goals from McGuire, Gabriel, Hill and junior attack Cate Soccodato. Marquette head coach Meredith Black attributed the quick start in the second half to “using our momentum, coming out fresh, coming out in your mind the scores still 0-0.”

The Hatters answered with one goal but could not affect the Golden Eagles’ dominating attack. McGuire and sophomore midfielder Megan Menzuber sealed the deal answering back with the 21st and 22nd goals, breaking the program record for most goals in a single game.

“Alex Gamabacorta played amazing. She definitely was huge for us. I think she set the tone for the defense and also just for our team and kind of the shutdown mentality,” said Black.

Sophomore goalie Julianna Horning made six saves in the first half. Freshman Sophia Leva took over in goal in the second half and made four stops.

“Confidence is always built in these types of games,” Black said. “Every player contributed, and every player did a nice job.”

The Golden Eagles will hit the road this week as they take on No. 17 Notre Dame Wednesday in South Bend, Indiana.