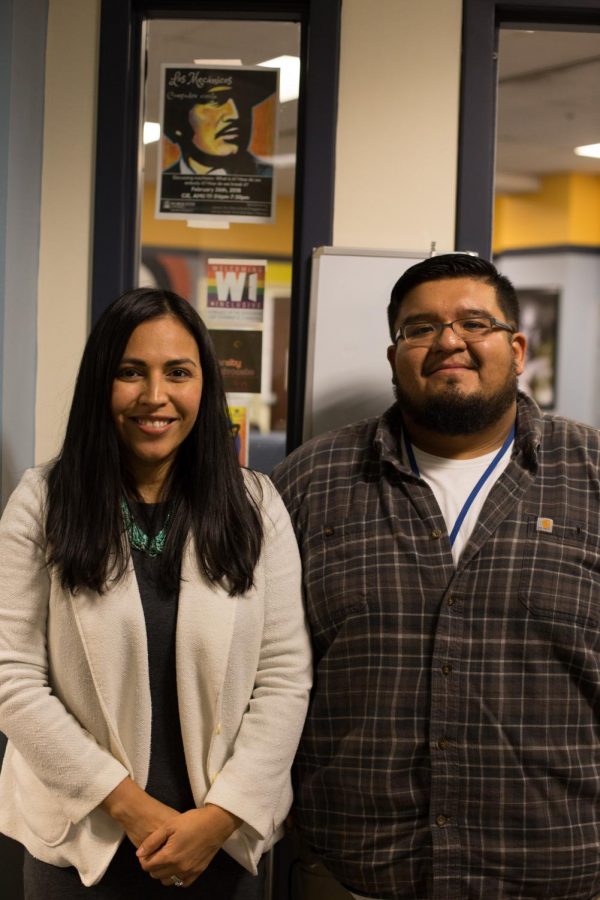 Eva Martinez Powless and Oscar Silva pose in front of the Center for Intercultural Engagement.

The Office of Intercultural Engagement recently hired a graduate assistant to work exclusively with Hispanic and undocumented students.

The university is working toward becoming a Hispanic-Serving Institution, which means Hispanic students will make up 25 percent of the student population. To become an HSI, it is crucial to pay close attention to the needs of Marquette’s Hispanic students, Xavier Cole said in a press conference last semester.

“In Student Affairs, we put out the challenge for all of our directors to think about how we serve these populations,” Cole said. “It’s first-generation students who need particular resources than more traditional students who have parents who went to college.”

Oscar Silva has worked in the Center for Intercultural Engagement since January.

The CIE is a hub for many minority students, especially Hispanic students, who make up the largest ethnic population on campus, Eva Martinez Powless, director of OIE, said. Because of this, there has been a high demand for academic support services for Hispanic students.

Silva also works as a high school English teacher at Ronald Wilson Reagan High School in Milwaukee. He said he often works with undocumented students in his classes, which made him a good fit for the CIE.

“A lot of the stuff I was doing there for high schoolers — getting them ready (for college) — we have a lot of undocumented students, but now this is a bigger scale,” he said. “Eva and I connected in a class, and she saw what I was doing, and she was like, ‘Let’s bring him over here.’”

More Hispanic students have been coming through the doors of CIE now than ever before, Martinez Powless said. Many students are looking for mentorships, coaching and guidance in navigating the college process. She said she reached the point where she was unable to help every student single-handedly.

Silva works with students in one-on-one and group settings, but he said he also works with several Hispanic organizations such as Sigma Lambda Beta, Marquette’s Latino fraternity.

“I’ve been talking with (Sigma Lambda Beta) about marketing,” Silva said. “(I’ve been helping) the other organizations around here that are Latino-based, helping them get the word out about who they are.”

Marquette’s biggest problem for its Hispanic students is its lack of representation on campus, Silva said. He said that in four or five years, he would love to see Hispanic students become comfortable accessing every corner of the university.

Silva said he wants to help Hispanic students become more involved at Marquette while still remaining true to who they are.

“I don’t want them to assimilate,” he said. “Assimilate would essentially mean become someone other (than themselves). I want to make sure that they are welcome and comfortable in the university.”