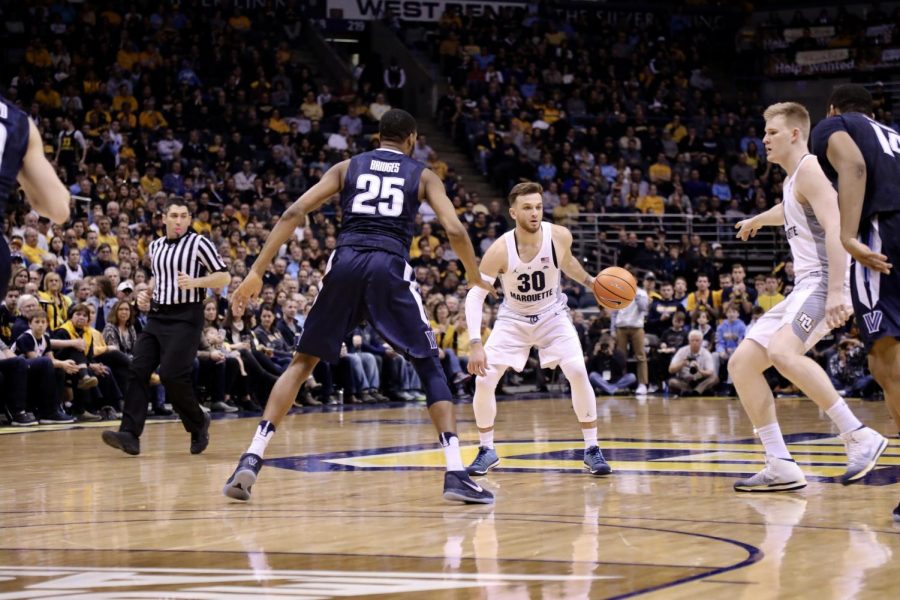 With Selection Sunday looming 16 days away and Marquette ranked 58th in RPI, the Golden Eagles sit on the edge of the NCAA Tournament bubble. ESPN bracketologist Joe Lunardi has made a career out of predicting which teams will be playing in March Madness ever since he first predicted the field for the Blue Ribbon College Basketball Yearbook in 1989. He discussed Marquette’s tournament odds with Marquette Wire assistant sports editor John Steppe after Marquette’s 85-73 win over St. John’s:

Where do you see Marquette’s tournament odds?

“I’d say their tournament odds are about 40 to 45 percent at this point. They’re in excellent position now I think to get to .500 in the league … If they can split the road games, 9-9 in the BIG EAST is going to put them right there, provided that they don’t lose to any of the bottom teams in New York.”

Do you see a possibility where Marquette wins the rest of its regular season games and doesn’t make the tournament?

“That would depend more on other teams I think, but it feels unlikely to me that they would miss at 10-8. Plus, that would have meant kind of turning around the losing streak in the middle of the conference season. They would’ve won five out of six to finish the season. At that point, you’re just trying avoid the dreaded bad loss … At worst if they’re sixth and they lose to three (in the BIG EAST Tournament), that shouldn’t be a deal-breaker.”

How much does Marquette’s stretch of five losses in six games affect their tournament hopes?

“It knocked them out of the field, and then it knocked them out of the bubble. They were still on my board because they were close enough to move back in. Right now, as we speak, I have them 77th, which is one out of ‘next four out.’ Their margin of error for something like that would be two or three spots, so you could certainly say that they’re on the bubble … but they’re there because they went through a stretch where they weren’t winning.”

How much do the road wins at Seton Hall and Creighton improve their resume?

“I think road wins are almost worth two wins. Officially on the RPI, they’re worth 1.4 wins because it’s been weighted as such. A road win is worth 1.4 wins and a home win is only worth 0.6. And now in the way they break down wins in the quadrant system, let’s say Seton Hall is 40 and you beat them at home, that’s not a quadrant one win anymore … You’re piling up the good wins faster when you win away from home.”

How have you seen the quadrant system play out across college basketball so far?

“I think it’s subtle, but I also think it’s important because at least in the short run, kind of what it’s doing is diminishing the excessive quantity of win totals of power conference teams that get a ton of opportunities … whereas for non-power conference teams or a lot of non-football schools, they don’t get as many of them at home, so it’s an effort to level the playing field a little bit.”

How does the double round-robin affect teams’ abilities at making it to the tournament?

“I think it makes it easier to evaluate because 10-6 is better than 8-8, whereas in a league where you have to break down who everybody played twice and who everybody played once and where were the games is more difficult. Where it really helps though is smaller conferences generally have better RPI for their middle and lower teams than bigger conferences, and the reason for that is they have a smaller bottom. There are fewer bad teams to play that kind of infect your numbers and spread to the rest of your league in the course of a schedule. That’s why typically in recent years, the Big 12 has put up some incredible power numbers and kept more teams on the bubble. I don’t know that it makes it harder; I just think it makes it different, and I think the difference is positive.”

Could St. John’s make the tournament after wins against No. 4 Duke and No. 1 Villanova?

“They need to get the automatic bid. Even with that stretch of beating Villanova and Duke, they weren’t getting an at-large bid starting the league at 0-11. I don’t care if they’re playing in the NBA West in the Pacific division; 0-11 is 0-11. You’re neither going to get the committee’s attention nor deserve it.”