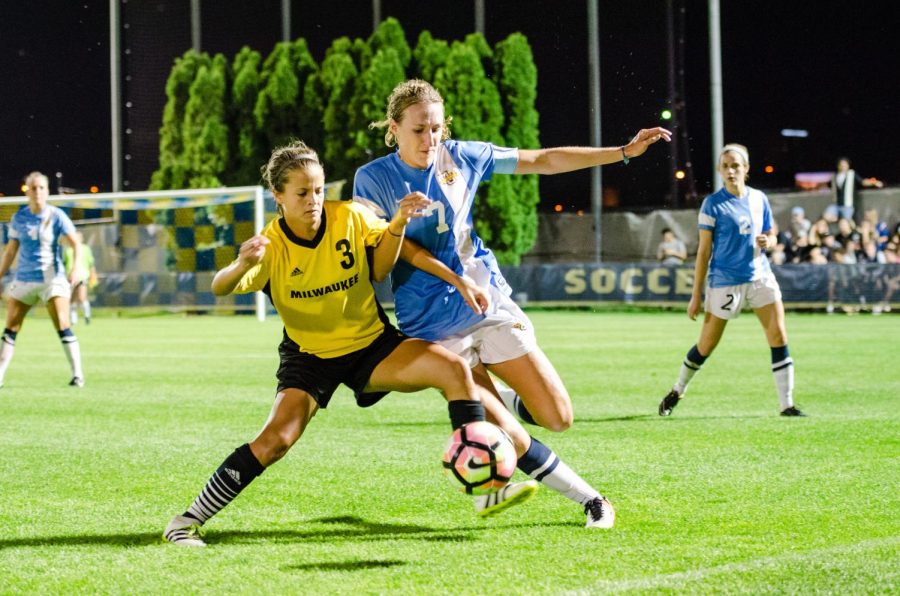 “It’s great to see each other when we’re all on road trips or away. It’s good to see a friendly face, good to catch up,” Kelly said. “We are all happy that everyone is doing well.”

Luba, a 2015 graduate of Marquette, was the first of two former Golden Eagles to land in Chicago. After playing with the Chicago Red Stars’ reserve unit, she was promoted and signed her first pro contract in 2015 with the Red Stars. Proffitt joined her in Chicago two seasons later when the Red Stars selected her with the 12th overall pick in the 2017 NWSL Draft. After playing two seasons with each other at Marquette, Proffitt’s arrival was like a family reunion about 90 miles south of campus.

“It was awesome, just like one more familiar face in the Marquette fam(ily),” Luba said. “We played together obviously for a year or two here, and we know each others’ tendencies, so it was fun to pick that up where we left off.”

Proffitt’s first career game came against a familiar face: Kelly, a 2014 graduate and FC Kansas City draftee. It harkened back to the days when all three members of Marquette’s 2013 BIG EAST Championship team when they regularly shared the field together.

“It’s weird almost because you’re used to having them on your team and now they’re on the opposite team,” Kelly said. “It’s really nice. You’re like ‘Mo, what are you doing?’ or like, ‘Get out of here, Luba.’ Just like it’d be at practice.”

All three players have found that the transition from Marquette to the NWSL has hardly been seamless. Profitt went from a tight-knit program to a more cutthroat NWSL atmosphere, which required some adjusting.

“Everyone’s friends and family, but I think it’s more of a job,” Proffitt said about playing in the pros. “You go out to practice and you go out on the field and you know you need to prepare and stay focused.”

She had to make another adjustment last August when the Chicago Red Stars released her and the Washington Spirit claimed her with a month remaining in the 2017 schedule.

“You have to figure out their tactics, their playing style, new players, you have to learn names,” Proffitt said. “Being the rookie was hard at Chicago, but then going to a new team, it’s like being a rookie all over again.”

Adverse moments like those make communication between the three essential.

“We keep each other in the loop on what’s going on, how we’re doing just here and there,” Kelly said. “Mo (Proffitt) has asked me some stuff about playing in the NWSL, or playing overseas and things like that before she even got to the pros. So, it’s useful sometimes.”

Communication varies from advice on where to play after college to text messages congratulating goals and good games.

“If (Kelly) will score a goal, I’ll text her like, ‘Saw your goal, keep it up,” Luba said. “It’s kind of just a little back and forth like that, so that’s cool.”

When Proffitt arrived in Washington, a family-like atmosphere similar to Marquette’s greeted her. One of her teammates bought her some Milky Way candy bars as a small belated birthday present.

“I had just got there, so I didn’t think anyone would know who I am or anything like that,” Proffitt said. “All the fans, we’re signing autographs and they’re like, ‘Morgan, welcome!’ A lot of them knew it was my birthday the day before, so they wished me a happy belated birthday.”

Whether Proffitt is playing in Chicago or Washington, Roeders will always be watching her and Kelly like a proud father.

“You live through them and see what they can do,” Roeders said. “I’m really happy for them. You just want them to be able to live their dreams.”

Marquette women’s soccer will scrimmage against the Chicago Red Stars of the National Women’s Soccer League (NWSL) next Saturday at Valley Fields.