BIG EAST basketball is as high-scoring as ever 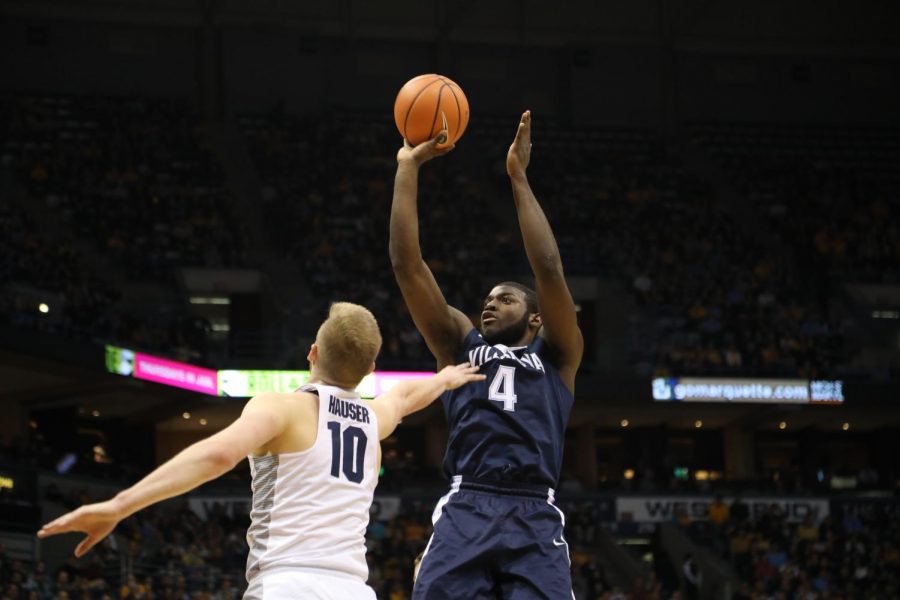 Villanova's Eric Paschall rises up for a jumper over Marquette's Sam Hauser.

The 2017-’18 squad returns its three best 3-point shooters and is almost identically as potent, scoring 82.1 points per game.

Instead of finding themselves at the top of the BIG EAST pack in scoring, the Golden Eagles are in fourth, a fact head coach Steve Wojciechowski attributes to strong coaching across the conference.

“(They have) really well-schemed, really well-planned and thought out offensive systems, where players are given freedom and have the talent and ability to execute,” Wojo said.

It’s certainly not the BIG EAST one’s parents remember — a conference that built its identity on physicality, to the extent that the NCAA instituted the five-foul rule specifically for the BIG EAST just to rein it in.

Instead, the style of play has become polar opposite of that era. Free-wheeling offensive possessions and a plethora of unused time on the shot clock has become the norm in the conference.

Xavier head coach Chris Mack, whose Musketeers are tied for fifth in the country in scoring offense with 85.1 points per game, has noticed the rise of offense in the BIG EAST, especially in comparison to other traditional power conferences like the Big Ten.

“I heard a stat the other day that said, ‘Minnesota leads the Big Ten in pace of play, but would be last in the BIG EAST’,’” Mack said. “Our teams really get up and down the floor. It’s a hard league to defend.”

Some of the increase in scoring is because of broader changes within the game; a shortened shot clock and embrace of the 3-point shot are responsible for the extinction of the old BIG EAST slugfests. St. John’s head coach Chris Mullin took part in his share of classic conference games as a player from 1981-’85. The league is now much different than the league he remembers, mostly because of the long-ball.

“The 3-point shot has been the biggest impact on basketball at all levels,” Mullin said. “Going back to the old BIG EAST, to me it’s tougher now because … any team can beat anyone on any given night.”

Villanova, the preeminent power in conference, exemplifies the new-look BIG EAST. A bevy of long-range shooters has propelled the Wildcats to a 24-3 record and no. 2 national ranking. Six different players shoot over 40 percent from beyond the arc. Their star point guard, Jalen Brunson, is having one of the most offensively efficient seasons ever recorded.

Villanova head coach Jay Wright said he views the BIG EAST’s depth of high-scoring talent as central to its identity as a top basketball conference.

“I think it’s got the highest-level players and coaches,” Wright said of the BIG EAST. “Consistently, top to bottom, I think it’s the best. How I judge the best is just night-in and night-out, how competitive are the games?”

Marquette’s road victory over the Creighton Blue Jays last Saturday is a prime example of the spit-fire scoring in the conference. The two teams combined to average 1.27 points per possession, far above the national average of 1.04. Only three of the Golden Eagles’ 14 games — home dates against Georgetown, DePaul and Providence — have featured both teams scoring below that 1.04 mark.

Running on offense is just as central to Creighton’s identity as it is to Marquette’s. Often, Creighton won’t even bother to stay for an offensive rebound once a shot goes up, preferring instead to get back on defense, which the Jays hope will lure the other team into playing at their tempo.

Wojo attributed the uptempo tenor of most conference games to the conference’s coaches and players.

“The style of the play in our league is as fun of a style as any kind could want to play,” Wojo said. “We have a league that has a number of offensive juggernauts … there is not a more exciting brand of basketball.”

Fans longing for the old BIG EAST’s heyday can take solace in the fact that the new conference is just as successful, if not as defensively-minded, as before.

At least half of the conference’s teams have played their way into March Madness for the last three seasons, and there’s every reason to expect it will happen again. Six of 10 teams in the BIG EAST are projected to make the NCAA Tournament according to the latest projections by ESPN’s Joe Lunardi.

“It’s a fun league to coach in and a hard league to prepare in,” Mack said.