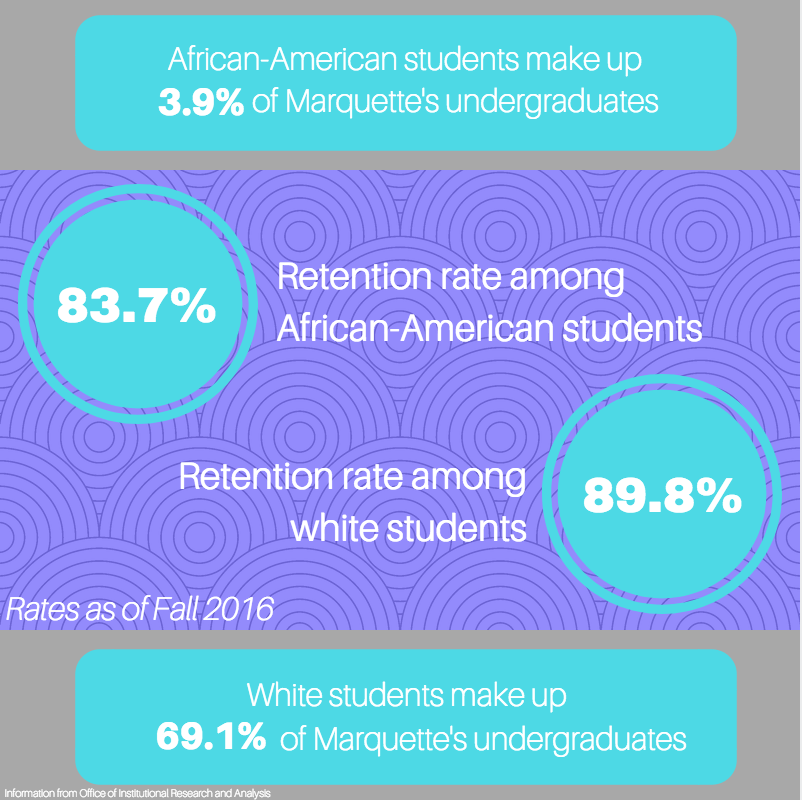 With a proposal for a new multicultural freshmen orientation, the university is aiming to promote diversity on campus. Graphic by Sydney Czyzon.

Historically, Marquette has had low retention rates for African-American students. In fall 2016, 83.7 percent of black students returned for their second year, according to the Office of Institutional Research and Analysis. This is almost 6 percent lower than white students.

African-American students make up approximately 4 percent of Marquette’s undergraduate student population, according to a fall 2017 report by OIRA.

“This is a population that has been saying that their experience has not been the best at Marquette, and we know from our retention numbers that this is where we’re losing students the fastest,” he said.

Cole went on to discuss some university initiatives to promote diversity among the student body, such as hiring Joya Crear as assistant vice president for student affairs and Major Cooper as assistant director for African-American student services in the Center for Intercultural Engagement.

Cooper has been working for the Center for Intercultural Engagement for about six months. In his first few months, he said his biggest task was building relationships.

“I’ve just jumped right into building relationships with African-American students, and in doing so, just being present,” he said.

Cooper also helped to create the African-American Student Task Force. Comprised of Marquette faculty and staff, the task force is looking into the structural and environmental factors that may cause the low rates of retention and engagement among African-American students.

Cooper has an open-door policy for all students to be able to come talk to him about their needs.

“Me, (sic) as well as my director, as well as our coordinator for the LGBTQ+ Resource Center have an open-door policy for students,” he said. “Anything we’re working on, we’ll stop that to address the needs and concerns of students as well as helping students navigate throughout Marquette.”

Cooper and the Office of Intercultural Engagement are also spearheading a project to create a multicultural pre-orientation for first-generation students.

“The multicultural orientation came out of a desire that Dr. Cole really wanted to make a more inclusive subset for (sic) marginalized populations and first-generation students,” Cooper said. “As they come to Marquette, (we want them) to feel the need to really be engaged from the first day that they attend Marquette University.”

The pre-orientation will run for a few days prior to the start of orientation, Cooper said. It will focus on resources and organizations available to minority students.

“It’s really geared toward first-generation, marginalized population students being able to navigate and see the resources that are offered to them before they start,” Cooper said.

Hiring Cooper was one of several steps taken as part of the University’s long-term strategic plan, university spokesperson Brian Dorrington said in an email. He highlighted several other diversity initiatives, such as working to increase the diversity of the faculty.

“We have changed the culture and established more accountability for hiring processes,” Dorrington said. “Institutionally, our departments and hiring committees are more aware than ever of the need to attract more diverse faculty and staff to campus.”