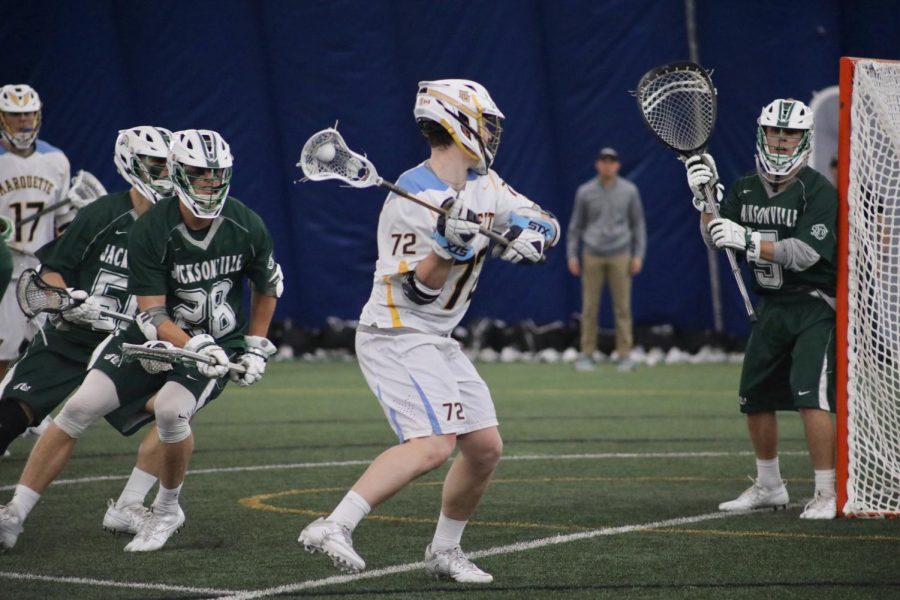 Freshman attackman Anthony Orsini has scored six goals in two games for Marquette. He will have his biggest test of the season against Ohio State Friday afternoon.

Heading into the first game of the season with a brand-new attack line, men’s lacrosse coach Joe Amplo knew someone had to step up.

“Those young guys on the offensive end, I think you are going see or hear from them sooner rather than later,” Amplo said before the season started.

True freshmen Anthony Orsini and Keaton Thomson made their debut on the front line along with redshirt freshmen Griffin Fleming and Colin O’Donnell last Saturday in the 11-10 win against Jacksonville.

Redshirt junior John Wagner scored the game-winning goal against the Dolphins, but the freshmen are seeing heavy usage.

“Hopefully it’s motivation for some other guys to feel like they can step up in a big moment like Johnny did today,” Amplo said.

Orsini scored his first two collegiate goals, recorded an assist and took seven shots in his debut. Meanwhile, O’Donnell added a crucial assist to Wagner’s second goal with 6:25 remaining to give Marquette a two-goal advantage. Thomson also took two shots on goal and picked up a ground ball.

Prior performances from both players foreshadowed their impacts this weekend. Orsini was named a U.S. Lacrosse All-American his junior and senior year of high school and Thomson notched 10 points in the Ontario (Canada) Junior ‘A’ Lacrosse League playoffs with the Mimico Mountaineers last spring.

The four players have been working with each other since the fall. O’Donnell and Fleming have been on campus since 2016 after both sustained knee injuries that kept them out of last year’s season.

“We practiced really hard all fall,” Thomson said. “All fall we were working for the starting spots that we were lucky enough to get. We’ve been working together as a team and I think it showed today in the end.”

Amplo said he was impressed with the freshmen’s debuts and believes it could be a precursor to future success.

“I just liked our ability in crucial moments to manage the game,” Amplo said. “I was proud of guys like Anthony and Connor  and even guys like Collin O’Donnell who went in and made a big play, to go in and make a single play to calm us down.”

The new-look line will have some help with Marquette’s experienced midfield and defense. All but one defensive starter returns, which has provided a boost to team cohesion.

“There’s no difference between all the positions,” Orsini said. “We’re all a unit when we’re out there on the field and we all have to work together to pull through on the field. I think we all have pretty good chemistry so far.”

That chemistry has come in handy after Keaton Thomson’s older brother, Tanner, made the decision to redshirt the season due to an injury from last fall. Keaton said even though the offensive unit had played together in three exhibition games over the last few weeks, being in a meaningful game produced nerves, although he doesn’t necessarily think it’s a bad thing.

“It puts you on your toes and you grip your stick a little tighter but as soon as you get into the flow of things, you have to play your game and settle down,” Keaton said.

The four freshmen attackmen will look to continue their impressive start to the season Saturday, Feb. 24 when they will play the University of Detroit Mercy at noon.