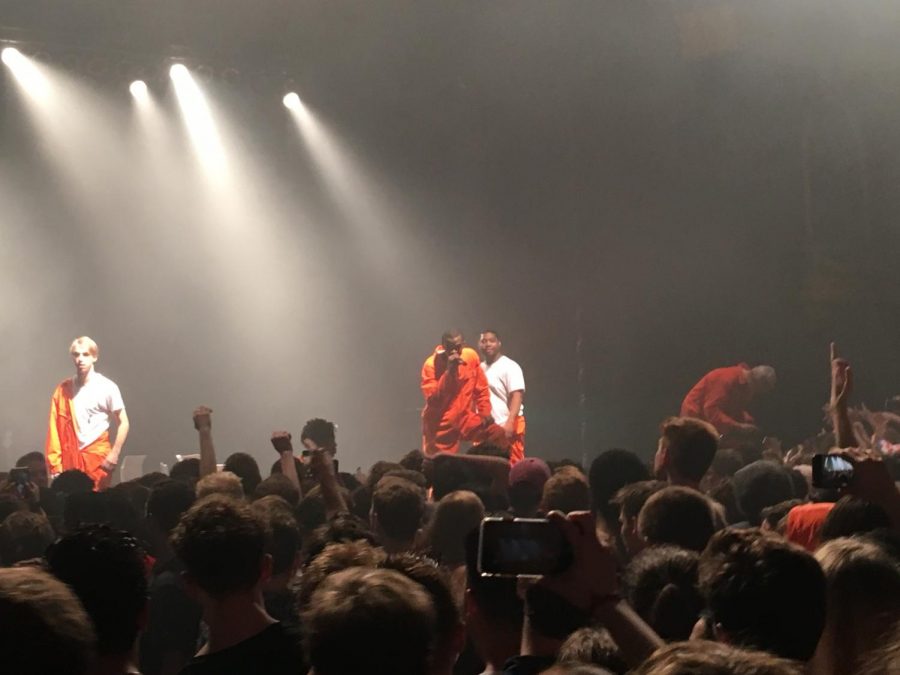 Kevin Abstract said that BROCKHAMPTON's show at The Rave was the biggest crowd they've played for.

BROCKHAMPTON has been very busy in the last year.

They’re the hottest rap group/artist in the country right now. They’ve taken the rap world by storm in the past year with the release of the standout “Saturation” trilogy and dozens of electric performances and concerts across the country.

Last summer, Viceland and BROCKHAMPTON collaborated on a short television series called “American Boyband.” The series followed the group and its process toward creating albums, music videos, merchandise and more for its young, yet beloved fan base.

The series lasted just one season but featured 10 insightful episodes that gave viewers a good look into BROCKHAMPTON and what the group is all about.

Among other established musicians, Tyler the Creator, a former member of the rap group Odd Future, has given much praise to BROCKHAMPTON’s members for their music and even had them open for his concert in Los Angeles this past December. Tyler also included the group on the performance set list for his illustrious music festival, “Camp Flog Gnaw,” alongside top hip-hop artists such as A$AP Rocky and Kid Cudi. The live MTV show “TRL” hosted BROCKHAMPTON Feb. 1 to perform “Saturation III” single “Boogie” in the streets of Times Square.

Currently on the “Love Your Parents Tour,” the band made a stop at The Rave in Milwaukee this past Friday.

Jake Horder, a sophomore at Marquette and new BROCKHAMPTON fan, excitedly said outside of the Rave just after the concert, “Best performance I have ever been to. The energy they brought was insane, and you could tell they were having as much fun performing as everyone else in the crowd was.”

With all these things going well for BROCKHAMPTON, the group will soon become a common household name.

Typically rap groups, like Migos or Rae Sremmurd, consist of two to three members. BROCKHAMPTON has 14.

They’re not all rappers, which is what someone might think when you hear the term “rap group.” But that could be a reason why they prefer the term “boy band.” The group is made up of rappers, singers, music producers, graphic designers, photographers, videographers, film and music video directors and team managers.

BROCKHAMPTON acts like their very own music label. It is its own music genre. And while all members play their own unique roles in the success of the group, there are some who are more prominently known than others.

The most notable member is founder and cherished rapper/singer, Ian Simpson, more commonly known by his stage name “Kevin Abstract.”

Abstract comes from a middle-class family in Corpus Christi, Texas. Much like all members of the group, Abstract raps and sings about what is truly important to him in his own personal life. Many of his verses are about the difficulties and the adversity he has faced from being a gay African-American.

However, he has used that negative energy to write deep and heartfelt lyrics that many BROCKHAMPTON fans can relate to.

“I like that energy he puts into his music,” Emmett McEnroe, a sophomore from Marquette and a big Kevin Abstract fan, who also attended the concert at The Rave, said.

Abstract credits his sexuality as a motivating force toward developing his second solo studio album, “American Boyfriend: A Suburban Love Story,” and also toward the creation of BROCKHAMPTON.

Back in 2010, Abstract made a post gauging the interest in starting a music group on KanyeToThe, an online forum where Kanye West fans go to talk about basically anything and everything.

Dozens of people responded but only a select few, such as Ameer Vann and Don Mclennon, made the cut. The group initially named themselves “AliveSinceForever” but changed their name to BROCKHAMPTON in 2014.

The boy band then recruited more members on KanyeToThe and moved out west to a small house in South Central, Los Angeles. All the members of the boy band lived in that very same house where they created and exchanged ideas for the music group.

They lived in South Central up until this past summer when they finally had enough money and recognition in the hip-hop world to move to a bigger house in North Hollywood where they now feel they’ve made it.

Collectively, they have released four studio albums (“All-American Trash” and the “Saturation” trilogy), and they plan to release their next album “Team Effort” in 2018.

What started out as a small online post has turned into something huge for Abstract and his boy band. It is much more than just the music. It’s a revolution. A revolution in hip-hop and what it means to be a boy band.

As Abstract raps on BROCKHAMPTON’s hit single “Boogie,” and like many of the members proclaim on social media, they are the “best boy band since One Direction.”