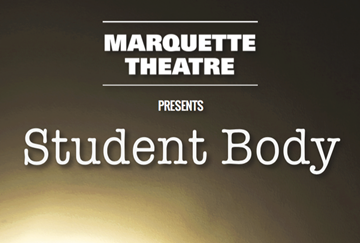 What would you do if your best friend sexually assaulted someone?

The answer seems simple: go to the survivor of the assault, alert the police and find a way to take care of the situation in the way that’s best for the survivor. Doing so should be easy because it is, after all, the right thing to do.

But take a moment to immerse yourself in the situation. This is your best friend. This is your roommate. This is the person you wake up and see making breakfast in the morning, the one who makes you laugh so hard you cry, the one who consoles you when you fail a test, the one who gives you relationship advice.

This quandary is just one of the many questions Marquette Theatre explores in its production of “Student Body,” a 60-minute, sobering and gut-wrenching play about a group of friends who discover footage of another friend’s sexual assault from a party the weekend before.

“It doesn’t matter how close you are with somebody, if they do something like this, they’re wrong, and you know that’s wrong, and you should be able to speak up about it,” Nicholas Cordonnier, a sophomore in the College of Communication, said. Cordonnier plays Rob, the friend of the perpetrator and one of two male characters in a cast of ten.

Cordonnier’s character is the one who filmed the assault and is ultimately caught between wanting to do the right thing and trying to defend himself.

“(Rob is) a good archetype of what not to do in the situation,” Cordonnier said. “I want people to look at my character and be able to point out his flaws … He is more or less than the antagonist, but he’s an important character.”

Cordonnier said he has a hard time connecting with his character, yet that perhaps the disconnect is for the best as it makes the audience feel a bit uncomfortable. This eerie feeling can be felt in the powerful lines, strong silences, and crisp sounds erupt from the stage and run down arms like goosebumps, as well as in the fact that the audience is forced to sit a mere five feet away from the actors — right on top of the stage — in a hard, plastic chair.

“We want you to be comfortable with being uncomfortable,” Annie Kefalas, a senior in the College of Communication, said. “That’s why the theatre is so great. You can get uncomfortable for an hour, and when you go home, you have this uncomfortable idea in your head, but you’re learning how to make it comfortable.”

This aim for discomfort is exactly why the space and set design (or rather, lack of both) work so well. If there were inviting, red, stale-popcorn-scented reclining chairs waiting to welcome audience members into their mildly sticky cupholder-filled arms, you wouldn’t get the same awful, visceral effect when Rene Leech’s character, Liz, snaps the memory card containing the sexual assault footage. It just wouldn’t properly transmit how the moment feels like she is walking over to your chair and literally snapping your arm in half.

“It’s a tough (moment) to anticipate,” Leech, a junior in the College of Communication, said. “It’s the ultimate humanistic response of ‘I just need this out of my hands.’ I hope it’s a powerful moment.”

For any person on Marquette’s campus or in the Milwaukee area that wants to be challenged, a viewing of Marquette Theatre’s “Student Body” will certainly do the trick. Whether you’re interested in learning about the survivors, discussing the perpetrators or hearing from the bystanders that will perhaps forever live with what they could, should or would have done, attending the show will prove to be a productive and insightful 60 minutes.

“People should come to this play because it affects you as a college student, as a woman, as a bystander, as any person in this current society,” Leech said. “Why wouldn’t you come?”

The show has nine dates, debuting on Thursday, Feb. 15 and ending on Sunday, Feb. 25. In addition, after each performance, the cast alongside local community experts will host a forum with audience members to create a productive dialogue regarding sexual assault prevention.

For information about ticket prices and seating, go to www.marquette.edu/theatre-tickets. The Marquette Wire will air a live stream of the play Feb. 24. The broadcast will be followed by a town hall forum focusing on campus sexual assault.