Embarrassing love stories from past, present 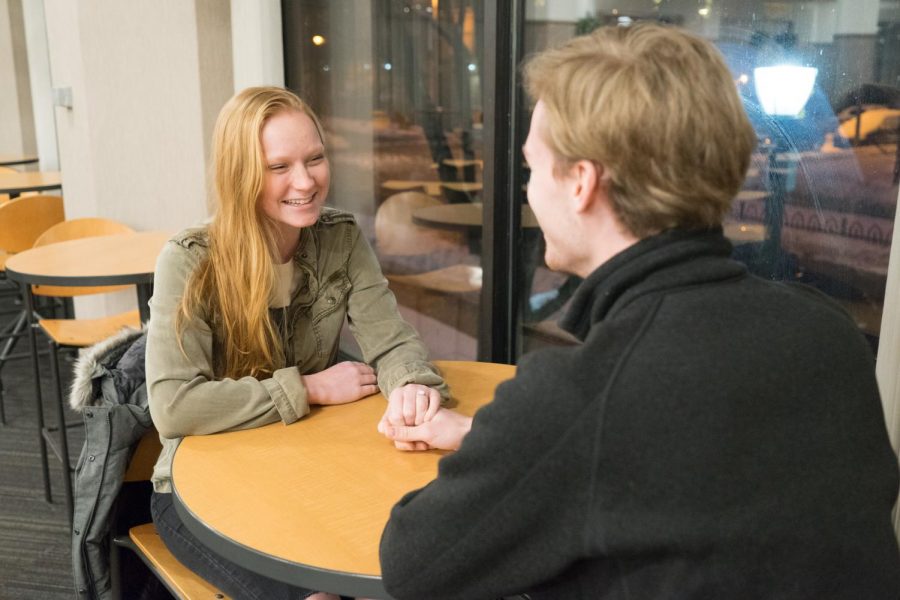 Even couples like Morgan Krouth & Mason Smith have awkward tales.

Last weekend, Katie Delia, a sophomore in the College of Communication, received a text message from her high school ex-boyfriend of three years asking her to come visit. They both had recently gotten out of relationships, and Delia initially wondered if her ex had interest in rekindling old flames.

This turned out to be far from the case. Instead, “He sent me a picture of him kissing this guy and said ‘I need to introduce you to someone,’” Delia said. The rest is an awkward history.

The reality is that many stumble through difficulties when it comes to love. With Valentine’s Day just around the corner, it’s a time to reflect on — and laugh at — some shared misfortunes.

When it comes to embarrassing moments, Becky Robb, a sophomore in the College of Business Administration, thinks back to a school dance in seventh grade. During Justin Bieber’s “One Less Lonely Girl,” Robb had her first kiss.

The seventh grader and her classmates may not have seen fault in the amateur peck and sailing notes of Bieber’s pre-pubescent voice at the time, but Robb’s view of the moment years later is certainly a more cringe-worthy story.

“It was extremely awkward and in front of my entire age group that included three schools,” Robb said, adding that people still tell her that their first memory of her was witnessing the uncomfortable kiss.

Drew Miner, a freshman in the College of Health Sciences, recalled an uncomfortable moment with a girl during his senior year of high school.

“We were just kind of casually seeing each other at first, but then we decided to go to a dance together … so we just start hanging out a little bit,” Miner said. “Then randomly one day after school she just shows up at my house with no explanation about why. She had never been to my house before. I asked her how she knew where I lived, and she said ‘Oh, I just looked it up.’”

Thankfully for Miner, the story ended there, without any tales of stalking or restraining orders to follow. The girl’s presence may have made for an awkward afternoon, but Miner said that times like those just seem to come with the all-too-confusing concept of love.

As long as there is romance, there will always be moments of misfortune, embarrassment and insecurity. Through stories of successes and failures navigating the complications of love, we learn more — and, if we’re lucky, get a few laughs out of it later down the road.