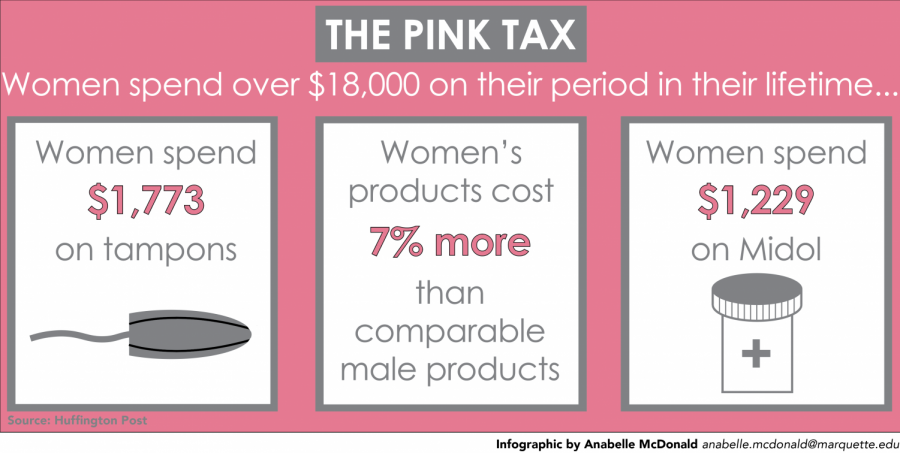 On average, women spend more than $18,000 on feminine hygiene over their lifetimes.

Despite the fact that about 50.8 percent of the population is female, there is still a stigma surrounding menstruation. It can be seen as a gross and taboo subject and is often not talked about. Efforts should be made to normalize menstruation and make it a more comfortable topic.

It is well known that women pay more for hygiene products. There is an actual name for this issue called “the pink tax.” The pink tax is a perfect example of this stigma surrounding menstruation. On average, women’s products cost about 7 percent more than comparable men’s products. Over a women’s lifetime, women spend about $18,000 on their period including things like heating pads, Midol and tampons.

There is also a lack of free products for women, and some women do not have access to the products they need at all. Millions of women in the United States lack proper access to medical supplies.

Women in prison are among one of the groups with the least access to feminine hygiene products. Homeless women are another group who have trouble maintaining their hygiene, especially while on their period, due to lack of resources.

Because the prices are so high for tampons and pads, women without access to these products either end up just bleeding in their clothes or wearing the same pad or tampon for days, which can be very dangerous. Bustle’s “Not Safe For Women” series illustrates this.

Leaving a tampon in for too long can lead to Toxic Shock Syndrome. TSS, although uncommon, can cause many prolonged health issues or even death in serious cases. Leaving a pad on for an extended period of time is not only unsanitary, but can cause bacterial infections.

While some argue against feminine hygiene products being free, many agree they should be cheaper. Those who argue against free feminine products say that tampons and pads are a luxury item and women could feasibly make do without them. Additionally, an economic argument is that stores would go broke if they simply handed out free products.

There have been more efforts lately to reduce the stigma around periods. In 2015, Rupi Kaur posted a picture of herself on Instagram that displayed her in bed with blood on her pants and sheets. She posted this to try to challenge the menstruation taboo. Unfortunately, Instagram removed the photograph twice, but then claimed it was an accident.

Posts like these can help to highlight the day-to-day struggles women face while on their period. It is important for people to see what women actually go through for the stigma to be reduced. Many times, these perceptions about periods and menstruation come from lack of knowledge or education about the subject.

Recently, people have been posting pictures of themselves on Twitter holding pads as a part of the “Pad Man Challenge.” There is also a new film that is coming out called “PadMan,” which highlights the stigma around menstruation. This movement came about to bring awareness to the film and get people excited about it.